Lt. Brian Rice is the third of several officers to have been acquitted of all charges relating to the death of Freddie Gray on April 19th, 2015. Circuit Judge Barry Williams found Rice not guilty of involuntary manslaughter, reckless endangerment, and misconduct in office.

Rice, 42, chose to have a bench trial, rather than a trial by jury. This meant that, instead of having jurors decide his fate, the decision rested entirely with Judge Williams. Earlier this year, Williams acquitted two other officers, Edward M. Nero and Caesar Goodson Jr., both of whom were also involved in the Freddie Gray Case. William Porter, a fourth officer involved in the case, had a mistrial last December after the jury could not come to a consensus.

Who was Freddie Gray? 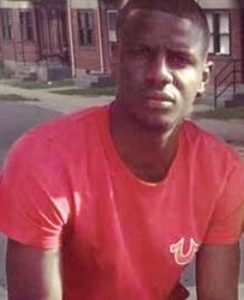 Freddie Gray grew up in the Sandtown-Winchester area of Baltimore, Maryland. By all accounts, he was a pleasant, friendly person. His friends and close relations described him as charming, kindhearted, and loyal.

Despite Gray’s  warm personality, he had had several run-ins with law enforcement prior to his death. He had been arrested over a dozen times, usually for possessing or selling marijuana, and several of his arrests ended in jail time.

Sandtown was a difficult place to grow up. The impoverished community is made up almost entirely of African Americans and offers little room for social mobility. Like many of his neighbors, Gray lived off of settlement checks from a lawsuit involving lead paint in the house where he grew up. He had never held a job, but his girlfriend Angela Gardner told the New York Times that he had dreams of bettering himself.

Several days before his death, Freddie Gray was arrested after he was chased by police. Gray noticed police in the area on April 12th, 2015 and fled. It is unclear what caused Gray to run from police – and why they arrested him.

According to Bill Murphy, the Gray family’s lawyer, “Running while black is not probable cause.” Murphy maintains that running from the police did not justify Gray’s arrest. Officers also found a switchblade in Gray’s pocket, but it was later determined that Gray had the weapon legally.

A bystander captured video of Gray’s arrest on a cell phone. The video shows two Baltimore Police officers pinning Gray to the ground. Later, Gray can be heard screaming for medical attention as a police van arrives to take him away. His requests for an inhaler were ignored, and one of the officers put Gray in a tactical hold before he was put in the van.

After they loaded him into the van on his belly, officers failed to secure Freddie Gray with a seatbelt once they put him in the vehicle. In addition to this violation of police policy, they put Gray in leg irons when he became “irate,” in spite of the fact that he was injured.

By the time the van arrived at the station, Freddie Gray was in poor condition. When he was put in the vehicle, he was able to communicate; by the time it arrived, he could not talk or breathe. Police requested paramedics to take him to the hospital 40 minutes after his arrest. According to state prosecutor Marilyn Mosby, his “spine was 80% severed at his neck.” Gray died a week later from the injury to his spinal column.

Upon examination of his injuries, medical experts determined that his death could not have been an accident. His autopsy revealed that officers’ failure to follow safety procedures put Gray at risk for trauma similar to that caused by a car crash.

The Public Speaks Out

Freddie Gray’s death has been the catalyst for demonstrations and protests across the country. Gray has been a rallying-point for the Black Lives Matter movement, a group dedicated to ending police violence against African Americans.

Following the death of Michael Brown the previous year, Gray’s death added fuel to the fire of unrest about police interactions with African Americans. Protests began breaking out in Sandtown the day of Gray’s death, and spread throughout the city in the following weeks.

Police erected barriers and donned riot gear to try to contain the demonstrations as they got out of hand, but to little avail. Riots escalated as thousands of demonstrators marched through the city, often clashing with police. By April 27th, the mayor and governor declared a state of emergency for the city of Baltimore and began enforcing a curfew that night. 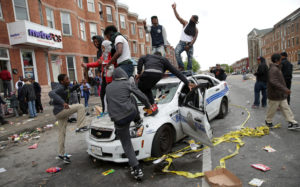 Gray’s case quickly caught national attention, and sparked debate throughout the country about what went on in Baltimore. In light of recent controversy, Freddie’s name has continued to be a rallying cry for many Black Lives Matter protestors.

Lt. Brian Rice was the highest ranking officer involved in Freddie Gray’s death. Prosecutors alleged that he was responsible for Gray’s death, since he failed to secure him with a seatbelt. Though many accused Rice of negligence, some went a step further, insinuating that his actions were intentional.

However, like his fellow officers, Rice was found not guilty of all charges. Judge Barry Williams found that the prosecution did not provide sufficient evidence to prove that Rice was guilty of manslaughter. This hefty charge carried a 10 year prison sentence with it.

Williams also found the evidence for the reckless endangerment charge insufficient. He said that simply putting someone in a van without a seatbelt did not constitute a crime, and was not enough to charge him with misconduct in office.

Officer Garrett Miller is next in line to stand trial for the Freddie Gray case. Lt. Alicia White also awaits trial and Officer William Porter will have a retrial in the near future.

Phoebe Harnish
When she's not writing, you can usually find Phoebe making music, reading, or enjoying the great outdoors. Phoebe studies literature and linguistics at a small liberal arts college in Pennsylvania.
RELATED ARTICLES
US