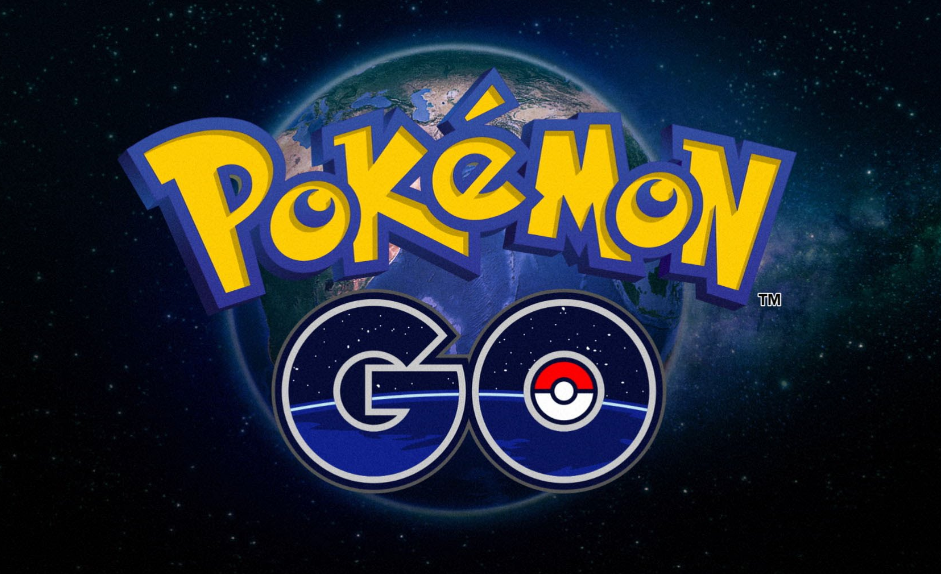 Step 1: Look at the CP curve of a pokemon. The CP curve (sometimes called arch) determines how much potential a pokemon has to increase it’s CP by powering up and tells you how far the pokemon is in increasing that max potential. 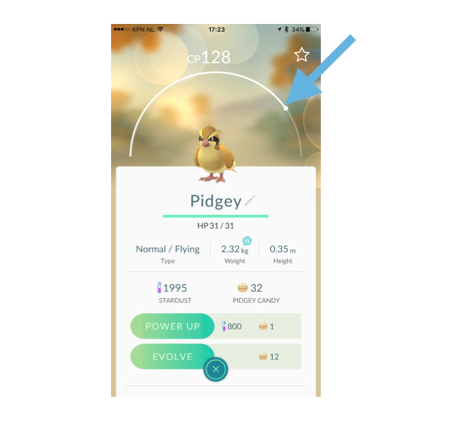 Step 2: Determine which pokemon you want to level up. Ok, quick question. Say you have 50 Pidgey candy and let’s pretend the Pidgeot on the left is a CP240 Pidgeotto with the exact same curve. Would you evolve the Pidgeotto or the Pidgey? 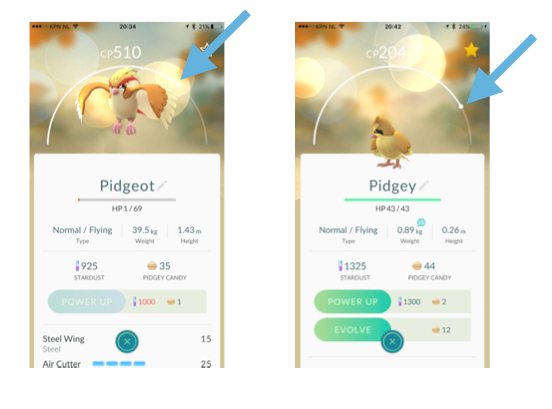 If you’ve chosen to evolve the Pidgeotto, you chose poorly. 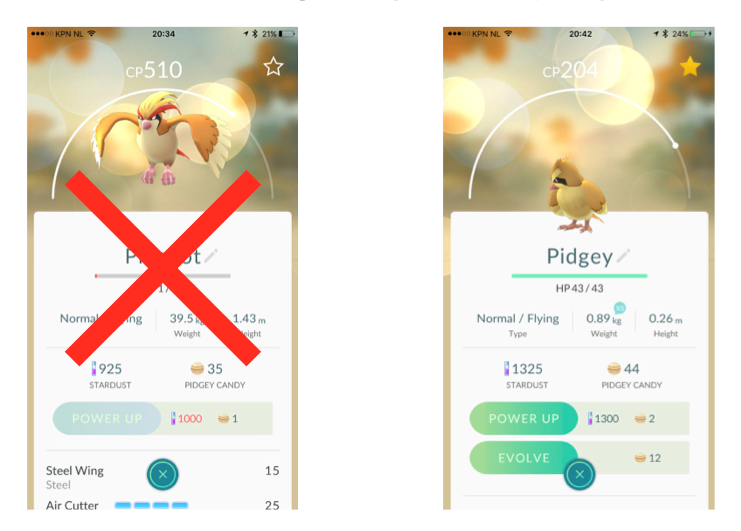 If you’ve chosen the Pidgey you’re a quick learner.

One might be inclined to use his candy for the pokemon with a higher CP, but it’s the curve that’s most important. At least across evolution stages it is. In this example this Pidgey would have evolved into a Pidgeotto of around CP280 and later on it would become a Pidgeot of around CP650-700. The Pidgeotto on the other hand will evolve in a Pidgeot of CP510.

Keep in mind though this is on a Iv114 trainer. The reason why I’m stating this is because a trainers Iv’ affects what the maximum CP is and what potential a pokemon has. I can have two Pidgeys at the exact same spot on the curve, one caught at Ivl 10 and one at Iv114 and the level 14 has a higher CP (I’m still not certain if this is because of the trainer Ivl at the moment you caught it, so take this with a grain of salt). Other factors are the pokemon’s weight, height and HP. Sometimes you’ve got to make hard choices, pick the pokemon with higher HP but slightly less CP or pick the pokemon with higher CP but slightly lower HP.

At this point you have a luxury problem, since you seem to have multiple eligible candidates to evolve, so there is no real ‘bad’ choice but there’s certainly a best one.

First let’s take a look at the two pokemon of whom one has a higher CP even though he isn’t as far on the curve as the other. That one is simple, choose the one with higher CP and lower curve, because this means that pokemon’s maximum potential is higher than that of the other one. Think about it, that pokemon is stronger on an earlier point at the curve, so in the end he will be stronger than the other one.

With regards to the HP dilemma, I always look at the attacks. Not so much at the typing (although I imagine later on when everybody has strong pokemon, having an attack with a different typing than the pokemon itself, should be a nice surprise for anyone trying to get it off your gym), but at the damage it does. The quick attacks don’t vary much in attack, but the special attacks do. I usually choose the one with the highest damage on special attack even if it has a longer charge. Simply because if that pokemon is on a gym, I don’t have to worry about it, the Al will handle the timing of using that attack.

So what do you do with that Pidgeotto you didn’t evolve? Well I have a personal rule, but feel free to deviate from it. The rule is as follows: `If it’s not the only pokemon of that evolution within that species in my possession, he get’s processed to candy by Prof. Willow if he isn’t in his last quarter of his curve.’

I make an exception for pokemon in their end evolution if they at least have half of their curve because I find it hard to let 50 candies go to waste. So I keep them with the intention of powering them up if I have nothing better to spend my stardust on.

Step 3: Only power up pokemon on that can’t evolve further. The aforementioned steps should give you powerful ‘vanilla’ pokemon (i.e. not doped up by stardust), but to get the strongest pokemon you usually have to power them up further towards the end of their curve.

I advise to wait with powering up until the pokemon is at it’s end evolution because of a couple of reasons.

People far smarter than me already figured out that the end result in CP is slightly higher when powering up after evolving.

Also powering up costs a lot of stardust (especially pokemon at their end curve, the price goes up quite a lot) and stardust is scarce. You only get 100 stardust for every pokemon you catch and a random amount from pokemon that come out of their eggs and for your defense bonus. So if you wait until a pokemon is fully evolved, you have a better way to compare which pokemon is the best choice to power up and the chance of you wasting stardust is smaller.

When it’s time to power pokemon I usually start with the strongest one I have. But at the same time I make sure I have enough stardust (and candy) for the pokemon that are my second, third, fourth and fifth best. This way I make sure that the pokemon grow in power equally because if I drop off my strongest one at a gym I need some other strong pokemon to conquer other gyms or at least train friendly gyms.