Pokemon GO has finally released all over the world, and Pokemon Masters all over the world are out collecting them all! Pokemon GO is a far cry from the original games, as now, you are the trainer and there are no controls – you have to physically move from place to place and go catch Pokemon. Since Mew and Mewtwo are included in Pokemon GO, here are some tips and tricks to get you on your way to collecting (or at least seeing) all 151 Pokemon.

Pokemon GO is a very interesting game since it is so different from the previous GameBoy games that everyone grew up. Instead of controls, you now walk around and navigate your options using the touchscreen interface of your phone. So, in order for Pokemon GO to work properly, you will need to have your GPS located on. The game will not load or work properly if there is no GPS signal. If your phone has a pedometer, which most older models will not, your phone will collaborate between the game’s internal code for tracking distance/time, your GPS, and the potential pedometer of your phone. If the game senses you are moving too fast, it will not track your steps and count towards certain things, such as eggs; people have complained about various situations. Some people have had luck in getting their steps tracked while on a bike or in a car, but others have had no luck.

Still, this can be exploited with a nice little trick – I taped my phone onto my ceiling fan, let it run for a few minutes slowly, and was actually able to hatch an egg while sitting on my fat butt.

Pokemon GO Plus is also an available accessory, which is a tracker that will pair with your phone via Bluetooth. When Pokemon, or even a Poke Stop, are nearby, the accessory will vibrate, and the player can attempt to catch a Pokemon, or receive free items, by simply pressing the button. This accessory is not available yet, but will be sold in stores starting on July 31st.

Of course, gyms and PokeStops are the hottest thing to do in Pokemon GO. For gyms, the player must reach level 5 before being allowed to commit to a team (red/blue/yellow) or participating in gym battles. Gym battles are simulated between a team of Pokemon that remain at the gym and the challengers. However, each trainer can only have ONE Pokemon located in a gym, so if you are serious about holding an area down (the bar across the street, for me), collaborate with others to create an effective team that has relatively few weaknesses.

For gyms, there is a counter known as “Prestige,” which is essentially hit points. If a rival faction beats the gym enough, that gym becomes neutral and can be contested by other factions. However, if your Pokemon is evicted while you are on the other side of the Earth, your Pokemon will return to your party without issue.

PokeStops are common locations, with one being located typically every few blocks or every several miles in suburban areas. These are how you will primarily be obtaining items, as you should never need to spend a cent on any items; PokeStops will give the player a variety of items starting at level 5, including health restoration items, status curing items, and even revives. There is also a Poke Lure Module, which will attract a wide variety of Pokemon to a PokeStop for 30 minutes. Of course, other trainers will receive this benefit, too. Pokestops recharge once every 5 minutes with items, and can be used an unlimited amount of times daily (well, 288 times daily). 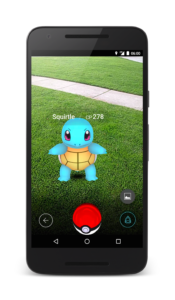 Curveballs give the player a bonus when successfully completing, as well as giving you a much higher chance to catch a Pokemon in the wild. To perform this trick, simply drag and rapidly spin the Poke Ball in a circular motion until you see sparkles, then let go. Should this prove successful, you will earn a bonus towards your experience and have an easier time catching rare Pokemon.

When throwing your Poke Ball, hold the icon down. A white ring will appears around the Pokemon in front of you, and will eventually start to shrink and turn green. When the ring turns green and has fully shrink down, you have the best chance to catch a Pokemon. However, this trick does take some skill, so go practice in an area where there’s a lot of Pokemon.

Pokemon will also have a colored background circle on their portraits in either red, yellow, green or orange, and this will signify how easy the Pokemon are to catch; green is the easiest, followed by yellow and orange, with red signifying that the Pokemon is quite a challenge to catch. Rarer Pokemon, like Dragonite, typically always come as red or orange.

The Pokemon’s CP level, the type of Poke Ball used, and your effectiveness at throwing the Poke Ball will all have a varying outcome on how you can catch the Pokemon. As you use a Pokemon to battle in a gym or evolve it, its CP will go up over time and it will grow stronger and more effective at defending gyms.

In addition, types DO matter in this game, so keep that in mind as you collect a vast amount of Pokemon.

In order to hatch eggs, which you will randomly receive in your journey throughout the entire world, you will have to place the egg in an egg incubator and take a certain amount of steps (see above for how the game tracks your position/steps) in order to hatch the egg. Upon starting your Pokemon GO character, you will receive an egg incubator which lasts for an unlimited amount of times. While you can acquire other indicators (BIG TIP), these are hardly worth shelling out real cash for; you get a ton of them from different events in the game. The purchased and obtained (from ingame sources) egg incubators will only last for 3 egg hatchings prior to breaking, so they really are not worth buying with real cash. I’ve already stockpiled numerous from just casually playing the game, and there can be some droughts where you receive no eggs for a long time. 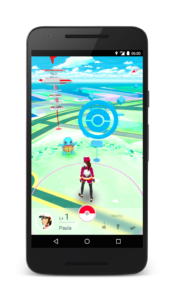 The final tip I can give to a Pokemon Master in training is to be prepared to walk A LOT. I ended up putting about 13 miles into my game the first day it came out, just walking around and checking out different Poke Stops and learning about the game. So, if you intend to travel far and wide in search of Pokemon, be prepared. This can mean bringing a backpack with rations and water to keep you hydrated and full, or it can mean biking slowly around your neighborhood. Journeying with friends is also a decent bet, as you will have more fun, meet people, and catch more Pokemon that way.

Pokemon GO is a brand new game, so keep an eye on this space for any discussion or updated tips and tricks on becoming a Pokemon Master. However, DO keep your eyes on your surroundings, as people have already become so enthralled in the game that they have done something foolish or gone somewhere they weren’t supposed to. Obey the law, but believe in yourself to become a true Pokemon Master. By using these tips & cheats you won’t have use pokemon go hack tools and risk your account.