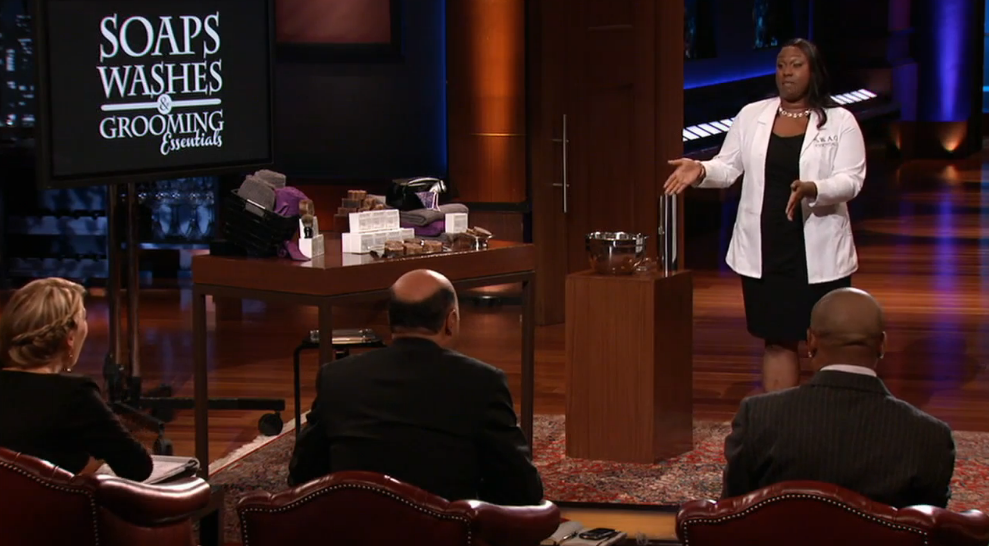 Lydia Evans started S.W.A.G. Essentials in her kitchen in 2012. The name stands for soaps, washes, and grooming essentials. Lydia is an aesthetician who decided to expand into the art of soap making. She was already successful as a licensed medical aesthetician, as well as a product development specialist. In her field, she specialized in skin care conditions and sensitivities. She studied Ethnic skin, as well as maladies such as eczema, ingrown hairs, hyper pigmentation, and psoriasis. Around that time her brother, who was a barber, asked her to come up with a new product to help with the razor burn and ingrown hairs that popped up after shaving. Because of her specializations, she knew she was up to the task.

Lydia worked for months developing the product.  She used trial and error to come up with the perfect facial soap. The creation, also know as the S.W.A.G. Bar is a proprietary 3 in 1 design. It includes an exfoliant, disinfectant wash, and soap. This is the line that she approached the sharks with, but it isn’t their only product. S.W.A.G. Essentials also sell moisturizers, after shave products, lotions, as well as a balm for the feet. All these products are geared mostly for men. However, S.W.A.G Essentials recently released a product line for the ladies called La Bella Dulce. 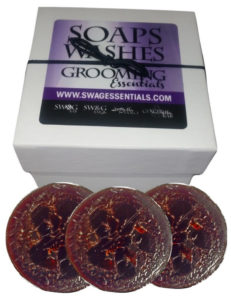 Lydia entered the Shark Tank in her white lab coat emblazoned with S.W.A.G. Essentials on the lapel. She introduced herself, and let the expectant sharks know that she is seeking $125,000 in exchange for 20% equity in the company. She explained that S.W.A.G. Essentials consists of a men’s skin care line, and it is short for Soaps, Washes, and Grooming Essentials. Lydia told the the sharks that she is a licensed aesthetician and she has been in that line of work for 8 years. She went into the exciting backstory of her company – her brother, who was a barber for 15 years at that point, called her to see if she could design a product that would help his clients deal with common but irritating problems – razor burn and bumps.

Lydia goes on to explain razor burn in excruciating and graphic detail.  She cited that it’s when bacteria gets trapped underneath the skin gets trapped in a the hair and breeds bacteria which makes the skin irritated. That’s how she developed her titular line of products, the S.W.A.G. bar, which is glycerin soap with a loofah trapped inside that scrubs the skin  Lydia had the sharks laughing as she imitated her customers, demanding “the goods”. She stated that the S.W.A.G. Bar was three things in one; a scrub, a soap,  as well as a disinfectant.   Lydia provoked more laughter again when she said the product would take off like a G5. She left her fate up to the Sharks when she inquired who would be flying on “Air Swag” with her as the product takes off.

Kevin told her to bring on the S.WA.G.  As she handed out samples to all of the sharks. she had a personal comment for each one and she handed them out. As Kevin poked his sample gingerly, Lydia let them know that she was formulating a product without loofah was well.  Robert then asked what loofah is. Lori interjected that loofah is a type of sponge. Mr Wonderful then schooled her that loofah is a plant that the ancient Romans used in their bathhouses to scrub their skin. Robert asked what else was on the soap, but Lydia refused to say. She stated that the product is proprietary and would not reveal its secrets. The next question from the Sharks was, of course, if she had a patent. Lydia declared that she did not, to avoid having to reveal her ingredients. At this point, she seemed pretty nervous. She was speaking fast, and was starting to stutter.  She stated that the soap has a total of 63 different ingredients in it, and declared that it is all natural.

Robert then asked if she had any sales. Lydia explained that she had sold the S.W.A.G. Bar through her brothers barber shop as well as online to the tune of $54,500. Kevin then asked what the breakdown was; i.e. – how many bars she had sold through each venue. Lydia said that the website was her main source of revenue, with 75% of the sales coming from there. Lori asked if she also made the product for women, and Lydia stated that that was in development. She said that women were fond of using it on places that they shave such as bikini areas and underarms.

Next, Robert asked just how much she was selling it for, and Lydia stated that she was selling it for $15 per bar. This was a 75% markup, and she only spends $3.07 to make each bar. This means that there is a pretty profit for each bar sold. Lori then asked if she makes each bar herself. Lydia declared that it was a home-based business. While this seemed to impress the sharks, they also looked concerned.  Mark Cuban expressed disbelief at this fact. Kevin asked how she planned to scale the business up from her kitchen table to, as he put it, world domination. Lydia’s stated that she had done the research, and knew that she needed to find a warehouse for more scaled up production. Lori said that she would expand her production by purchasing larger machines. Daymond then ask her if this was her only job and she stated that she was still working as an aesthetician. There is an extremely awkward moment as he started to ask her what her husband thought … then back peddled and asked her if she was married. Lydia jokingly said no and asked if he knew any single guys. She ended with a nice recovery, saying that the business was her baby and her boyfriend.

Shortly after, Robert backed out stating that he knows what he knows and he did not know anything about this business. Therefore, he would not be a good partner for her. Kevin was the next to go out next stating that he thought it was too early for him to get involved. He wanted her to have already started manufacturing at the warehouse. Lydia looked sorely disappointed. Perhaps he had been her first choice.  Lori declared but she loves little Lydia’s innovation in putting the loofah in the S.W.A.G. bar. But she was the next to go out citing concern but there is only this one product and it was a little short-sighted. what is starting to look shell-shocked and sad. Mark Cuban was up next. He suggested that she go door-to-door to different barber shops to try and expand her market that way. She tried to tell him that that’s what she needed him for- for that sort of advice. He wasn’t having it. Mark said that it would be too much work to get her to where she need to be in order for the business venture to be profitable for him. He went out. This left only Daymond.

Daymond said that she was great, along with her product. But he thought that she had more knowledge than him in this area and that he wouldn’t be much of a help. Daymond was the last to go out. In another profoundly awkward moment, he still offered her his number in case he was single in the future. What all female business people dream of hearing, I suppose. She made the Sharks laugh again as she told him that she preferred long romantic walks to the bank. Even though she did not get a deal, at least Lydia walked out with a smile. As Lydia exited, Lori said that the S.W.A.G. Bar was a very smart idea-  it was just too early to invest.

Lydia did not walk away from Shark Tank with a deal. That doesn’t mean that she was not successful in the interim. The episode aired in the beginning of December 2014, and since then Lydia has supposedly grown her customer list from hundreds of customers to the thousands. It definitely helped that the episode aired so close to Christmas, pulling in lots of revenue. S.W.A.G. Bars are available on Amazon with free Prime shipping by clicking here, for more than $3 less than the retail price that Lydia stated on Shark Tank. She must’ve changed her mind about the patent – there is a “Patent -Pending” notice on the promotional images.  The bars, along with the full line of products, is available on their website. There is also a S.W.A.G. Bar for women called the Gyngerella bar marketed by the same company. Their social media accounts are active, and posting new things every day.

The S.W.A.G. Bar was featured on the Forbes website, and the female version was featured in an article on Marie Claire, the popular women’s magazine. Most exciting, the S.W.A.G. Bar has been used by a bunch of celebrities! It was in the swag bags for the 2015 Oscars. Pretty good for a product that was not funded by the Sharks. As stated on the S.W.A.G. Essentials website, she was called back to the Tank for an update. Perhaps she has scaled up enough for the Sharks to invest in an awesome product!