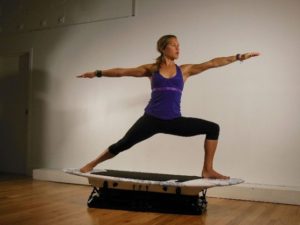 Mike Hartwick is a former professional hockey player who isn’t unfamiliar to your standard workout routines. He is someone who can understand that doing the same exercises on the same equipment can become a little dull. That is why Mike would spend his time in California during the off seasons. During his stay, Mike would do a lot of surfing and he enjoyed this regimen so much that he asked Sarah Ponn, a nutrition and fitness expert, to team up with him in the production of Surfset Fitness. Their plan was to bring the exercising benefits of surfing to everyone in the gym by creating the RipSurferX.

The RipSurferX is a piece of training equipment that allows people to receive all the physical benefits of surfing, only you don’t need the ocean to do it. Mike and Sarah didn’t just want to sell these surfboard-esque pieces of equipment though. They also wanted to be able to certify Surfset Fitness instructors who would be capable of teaching large classes of people on how to reap all the benefits of this particular type of exercise.

Starting a new business can be a difficult task, especially when you don’t have the necessary connections to get the name of your new brand out there on the market. Mike definitely has a leg up since he was formerly a professional hockey player, but even that isn’t enough. So he and Sarah jumped on board and paddled out to the Shark Tank, hoping that they would be able to attract one of the Sharks into taking a bite out of this business.

Both Hartwick and Ponn entered the Shark Tank seeking a $150k investment in exchange for a 10% stake in the Surfset Business. Then they tell the Sharks that their plan with the Surfset Fitness is to set up classes with instructors to get people familiar with their product, the RipSurferX. This piece of equipment has been designed to imitate the instability of a surfboard on water, allowing its users to work on their balance skills and core muscles.

They brought with them Lakey Peterson, one of the top 10 surfers in the world. She jumps onto the RipSurferX to demonstrate just a few workout moves to the Sharks. She does a “pop-up” which works the legs, core, and arms in addition to enhancing a person’s balance. Then she does a “dip dive” and that works all of your upper and middle body muscles. Mark Cuban seems to be showing quite a bit of interest in this product, but Kevin O’Leary is the first to speak up. 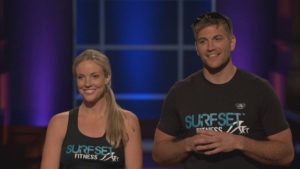 His main concern right now seems to be that the workout moves Peterson just demonstrated appear to be a little too challenging for your average person to perform. O’Leary isn’t convinced that your average Joe would be able to do these workouts. Robert Herjavec is then volunteered to step up and try to product out for himself. As soon as he jumps on, Herjavec is very shaky on the board, but he seems to be having a good time. One of the exercises leaves him a little off balance and he ends up falling off the board, but he isn’t unsatisfied with his experience.

The next question is asked by Cuban who wants to know how you change the difficulty levels of the board. It’s actually quite simple to do. You just snap off the chords on the sides of the board which will then make it even more unsteady. The weight limits for these boards is 450 pounds, which means that it can be used for people who are also looking to lose a lot of weight and get into better shape.

Hartwick found the inspiration for Surfset Fitness through his own surfing experience. Whenever he spent an off season surfing in California, he always came back to the rink feeling lighter on his skates and just physically better than ever. After that, he teamed up with Ponn and got to work on creating the equipment, then teaching classes. They managed to make $150k in class sales in California, so then they decided to take it to New York and ended up receiving a lot of attention from it. Celebrities would stop by and people were spending up to $35 for a class, and all of their appointments were completely booked for 4 months.

It costs $150 to make one RipSurferX and they sell retail at $400 each. Daymond John thinks that they need to bring the manufacturing price down to $100, but Hartwick quickly states that it shouldn’t be a problem to do that. However, John also isn’t so sure that Hartwick’s valuation of the brand at $1.5 million is actually reasonable. Hartwick  doesn’t really see the issue because as of right now, they have received 200 inquiries on potentially franchising. People want them to set up their own studios and making a new fitness regimen. Still, John believes that they are undervaluing the connections and experience that the Sharks would be putting towards making this brand a success.

Without any more hesitating, Cuban decides to put an offer on the table because he sees a lot of potential here. The Surfset Fitness could hire professional surfers to teach these classes which would then give them a better reputable name. But there is an issue he sees, and it’s that he believes they are going to need quite a bit more money if they are going to do this the right way and Cuban wants to make this time and money worth his while. So what he decides to put on the table for them is $300k but he wants 33% of the business. 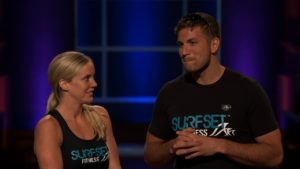 None of the other Sharks seem to think this would be a good deal for them to take because now it’s undervaluing the business. Herjavec puts up the $150k but instead wants 20% of the business, which is a little more fair that Cuban’s offer. The two argue back and forth a while because Cuban calls Herjavec out for also undervaluing Surfset Fitness, but then John butts in to make his own offer. He is willing to give then not only the $150k, but he is also ready to pay for all the manufacturing of the boards so long as he gets a 25% stake.

All of the Sharks start to go at it with one another, making arguments as to why certain offers are better than others. Barbara Corcoran speaks up for the first time to tell Hartwick and Ponn that the best person for them to go into business with his Cuban. She says that he is “cut from the same cloth” and that he’s very honest, which is exactly the kind of person they need on their side. Herjavec and John are irritated by this statement because they completely disagree, and are even more outraged when she offers to go in on halves with Cuban’s deal. Herjavec and John both defend themselves by listing their own individual assets that they could bring to the table, leaving Hartwick and Ponn with a very difficult decision to make.

Before the two can decide what they want to do, O’Leary chimes in to say that he’d be willing to go in on the deal with John, who quickly accepts. Now Cuban is getting a little impatient and decides that the two of them need to make a decision right now because he’s on the verge of dropping his offer. There is three offers on the table that they have to choose from and they ultimately end up going in on a partnership with Cuban once he decides to drop his stake in the business down to 30%.

Almost immediately after appearing on the show, Surfset Fitness went around to 24 different cities nationwide in order to hire and certify different instructors for their future classes. During their travels, they managed to seal incredible partnerships with UnderArmour and Garnier Fructis and by the end of 2012, they had set up locations in 29 different cities. Not only that, but the RipSurferX and the Surfset Fitness brand has been featured in Forbes Magazine and The Wall Street Journal, in addition to also having been aired on NBC News, The Doctors, and Fox News.

You can learn more about the brand and its growing popularity on their website, http://www.surfsetfitness.com/. You can look up classes near you and also buy your very own RipSurferX board. They also have a twitter where they actively post updates and more information on the product, which has clearly become a huge success since appearing on Shark Tank. Maybe the other Sharks didn’t necessarily agree with Mike and Sarah’s decision to give up so much of their business, and maybe they were right, but clearly that hasn’t stopped any of them from making a lot of money off of this new form of fitness training.