Jayla Siciliano, the founder of Bon Affair, has come to the Shark Tank in order to seek a $150,000 investment in exchange for 35% of her company. Jayla starts by guessing if most of the Sharks like to drink wine, and also care about their health; Jayla is one of 50 million Americans who feels the same way. However, in her past career, there were so many dinners and parties, and while she loved to have fun, she couldn’t afford to wake up feeling groggy in the morning. As a result, she started adding soda water to her wine to socialize longer and she would feel better the next morning. She was hit by the inspiration to bring the product to the market, and quit her job in order to pursue Bon Affair full time.

Bon Affair is the first premium wine-spritzer with California wine, purified sparkling water, and electrolytes. There is no added sugar, and the drink is 6.5% alcohol, but Jayla says that this is not a replacement to a delicious full-bodied wine. Bon Affair is more of an alternative, and she calls it, “the best sparkling water ever.” Jayla hands out samples to each Shark. Robert asks how many calories are in a normal glass of red wine from Bon Affair, and Jayla says that each glass only has a shocking 65 calories in it.

Mark asks if any of the other Sharks are wine spritzer drinkers, as he admits he isn’t. Wine spritzer is a drink that is about three-quarters wine and one-quarter of chilled club soda, and Barb says that she is. Barb says that the Bon Affair wine is less sweet than a wine spritzer, and ponders if men actually drink wine spritzers. Kevin says that men do drink wine spritzers in the summer time, giving an example of Rose wine with ice in it. This drink was started in southern France in the 50s, and the drink has since exploded in popularity all over the world.

Robert asks who exactly the target customer of Bon Affair wine is, which Jayla says is a woman who has a busy career or is a mom but who also likes to drink wine a few days a week. Mark calls it a “skinny margarita alternative,” which is a great term to apply to Bon Affair. So far, Jayla says, they are selling in 10 Whole Foods in California, and are in the process of moving into more Whole Foods and stores. Daymond points out that Bon Affair has clearance in only California at this point, which makes sense under the United States Food Drug Administration protocol.

Jayla continues on, saying that within the past six weeks, they have sold about $11,000 in the limited stores that Bon Affair is located in. However, all of the Sharks seem a bit concerned about the weak sales number, but Robert points out that Bon Affair is only six weeks old and is brand new. Barb points out the elegance of the design of the wine bottle, asking if Jayla is a designer of some sort. Jayla says she used to work for product development in footwear and bags for seven years before pursuing Bon Affair.

So far, she has invested $35,000 of her own money, and has been doing everything she can to make ends meet. Jayla returned to bartending and when all her resources dried up, she went to pitch to investors; she earned a whopping $450,000 investment from two private investors that she had never met previous to pitching. She received a $2.6 million valuation, which causes Kevin to giggle with glee; Jayla calls herself a “mini sharkette.” Jayla continues on, saying that she has spoken with her company and the entire company agrees that the whole company finds a partnership with any one of the Sharks worth it.

Kevin points out that this means Jayla has run out of money. Jayla explains; they received the $450,000 and it was “off to the races.” Jayla had a bottler in Michigan who had a fantastic reputation, but something went very very wrong. On the initial production run, only about 10% of the Bon Affair wines made it to market due to leaking caps on the bottles. These bottles leaked because the bottler didn’t put the caps on correctly, Jayla said, and their existing investors put in another $150,000. Barb asks exactly how much money was lost due to leaking caps, and they lost over $100,000 worth of inventory due to the mistake.

To date, the total investment has come out to $700,000. Jayla says that the goal is to grow this, and find a potential acquisition down the road, poorly citing coconut water as an example which causes Mark to laugh and point out that coconut water and alcohol are two very drastically different markets. However, Daymond says he finds the category amazing, but the amount of money needed to take Bon Affair to a wider market is going to be a huge amount. Jayla says that many other beverages have started in grassroots, just like Skinny Girl margarita paved the path for the lower calorie alcohol market. Daymond says he considers this very rare to the point of a borderline hypnotic path.

Daymond continues on, saying that Jayla will not be able to even touch the market without at least 5 million dollars of investment. He says that he already “lost his shirt” on one investment, which evidently was a huge loss for Daymond’s portfolio. Daymond is the first Shark out of the deal. 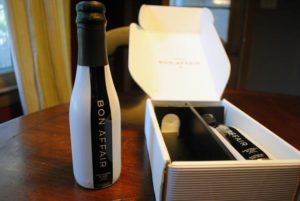 Robert says that he doesn’t understand how Jayla raised $700,000 from investors to then eventually value the company at around a $2.5 million worth. As a Shark, he finds a value of $420,000, and it doesn’t add up for Robert. Robert says that it affirms there are some bigger challenges facing Bon Affair, and Robert is out of the deal.

Kevin asks Jayla if she knows who the largest market for wine is on Earth. Jayla replies with “women,” which Kevin shoots down immediately. Costco is actually the largest purchaser of wine. West of the Mississippi, there is only one buyer, Kevin says, and he asks why Jayla has not gone out to Costco yet in an attempt to get the product into a huge market. Kevin says he is in a difficult situation because Jayla has tanked a lot of investor dollars, and the space will require a lot of legwork to get the product out. Kevin has been in this space before, and he does not find the investment worthy of his time or energy, so he is out.

Barb admits she is amazed that Jayla managed to raise $700,000 from her investors. While Barb thinks that Jayla is an amazing salesperson, she finds there is a “double sell;” Jayla has to sell the brand and then sell the product. Barb isn’t willing to tie up her money in an unproven product, and also exits the deal.

Mark asks what the one thing Jayla needs is, to which she replies exposure and contacts. It took a year to get into Whole Foods, and Jayla knows she can get a distributor and bring her product into Costco, but with Mark behind her she can move a whole lot faster. Mark says he likes Jayla but isn’t an expert in the wine business, and proposes an offer. Mark offers the asking $150,000 in exchange for 35% of the company.

Without hesitation, Jayla accepts the offer as Mark gives Jayla exactly what she came in asking for.

Bon Affair Now in 2018- The After Shark Tank Update

Bon Affair is still going strong, but is only able to be shipped and purchased in some states. These states are California, Arizona, Texas, South Dakota, Arizona, Maryland, New Hampshire, Florida, Arkansas and Minnesota. However, those lucky few that are able to receive Bon Affair either from shipping or purchasing in a store have given it strong reviews. Bon Affair offers two flavors, Syrah and Sauvignon Blanc, which are derived from several world-class wines.

In addition, there is also a Bon Affair Wine Club. Members can receive up to 15% off and will receive one shipment quarterly (December, March, June and September) and receive some “additional benefits/exclusives” throughout the entirety of the year. There is a gold and platinum club, which both offer the 15%, but the platinum club includes free shipping.