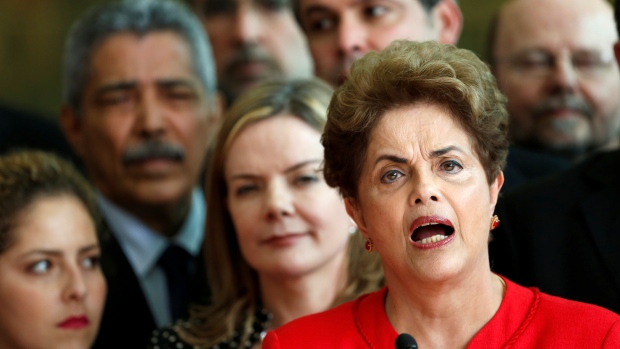 After a long impeachment trial, the Brazilian senate has voted to remove the country’s first female president from office. 61 of the 81 senators voted to remove Dilma Rousseff, who won her first election in 2010. Rousseff had two years and four months left of her term and she was replaced by Michel Temer, who became the 37th President of Brazil just a few hours ago.

The senate also decided not to ban her from public office for eight years in a different vote. That vote finished 42 to 36. Temer was sworn in by Congress yesterday and spoke about rescuing the economy, which has declined recently.

Rousseff has won all of her elections but support from the population and Congress dropped after the economy started declining. A bribery scandal between the biggest parties in the country also didn’t help. The impeachment trial began months ago and Rousseff had been suspended by Brazil’s senate in May. The trial began over claims that she was spending money without congressional approval ahead of her reelection two years ago.

Rousseff spoke to her supporters after the decision by the senate and said she would appeal her impeachment. She was re-elected in 2014 after receiving more than 51 percent of the votes. The election race of 2014 was the closest in the last 25 years. Earlier this week, Rousseff was questioned for 14 hours. A final session was held on Tuesday and the senators gave their thoughts on the situation.

More than two thirds were needed to remove the president from the office and the results showed a lot more votes. 54 votes were needed and 61 voted to remove her. Rousseff quickly lost support from the population and congress during the economic decline. A few protests from supporters did take place in a number of cities this week.