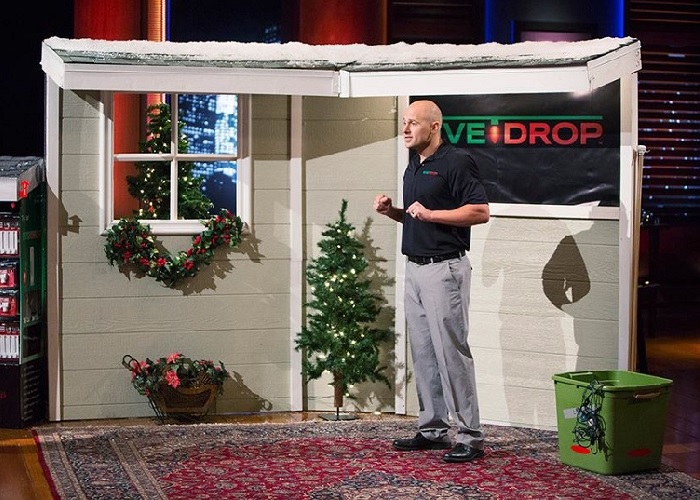 Nathan Shaffer, a successful salesman from Henderson, Nevada, liked the festive period. Unfortunately he didn’t like the ordeal of climbing up a ladder to hang the Christmas lights, all just to reverse the process three weeks later.

The married father of four spent over a year developing a new invention, one that would allow Christmas lights to be fastened to a bracket system. The system would allow the lights to be drawn out of sight with ease, and then brought back into view again the following year, all without a ladder in sight. He founded his company in March 2013 and originally called the product Lightslide.

Like many other entrepreneurs who eventually make it to the Shark Tank, Nathan took his idea to the crowd funding website Kickstarter late in 2013, but unfortunately he failed to reach his funding goal. He redesigned the campaign, set lower goals and tried Kickstarter again in early 2014.

On the second attempt, with the newly branded Eve Drop, he was successful. Nathan managed to attract 74 backers, who pledged just over his $4,000 initial goal between them. The funding was to enable him to complete the production process, which was particularly expensive initially, due to the large amount of individual components in the Eve Drop system. All the components required customized molds before production could commence.

There was a delay of six months before the complex overseas production process was completed, but in July 2014, Eve Drop was finally shipped out to its Kickstarter backers. However, Nathan was still hoping to attract investors to the business, to help ease the tight budget for his fledging start-up. On an impulse, the entrepreneur applied for Shark Tank in Mid 2014. Nathan was accepted and appeared in the special festive edition of series six, that aired on December 12th 2014.

Nathan was hoping to exchange 20% equity in the Eve Drop business in exchange for a $75,000 investment when he appeared before the sharks. The man from Henderson began a polished pitch by explaining the regular annual dislike he had of hanging festive lights, and his inspiration to devise a solution. With a flourish the entrepreneur revealed his product, Eve Drop, and asserted to the sharks that his invention was the only way to easily change lights, from ‘Storage mode to Display mode’.

After running through a quick, and fairly impressive, demonstration of the Eve Drop system on a mock-up of a wall, Nathan finished his well-delivered pitch by asking the sharks who wanted to join him in ‘Helping America spend less time decorating, and more time enjoying the holidays’.

Robert Herjavec was intrigued, and asked how the product worked. Nathan was prepared for that, he had created a reversed version of his mock up, so the sharks could see the bracket holding the lights. He demonstrated the easy to operate system, that held the wires in place, and made it look effortless to use.

Barbara Corcoran rightfully pointed out that just being able to move lights a few inches, on a bracket, didn’t exclude the need for a ladder. Nathan was ready for that point too, he smoothly introduced the sharks to his complementary product, the Eve Drop Pole Adapter. This addition to his range enabled users to move the light fittings in or out of view from a distance, and from firm ground rather than a rickety ladder.

Nathan had clearly practised his pitch, and had performed solidly so far. Barbara Corcoran asked what sales the business had achieved to date. Nathan admitted sales up to now had been $4,500 and the sharks burst into laughter.

Kevin O’Leary cracked ‘Lights out’ with a smile, and the sharks laughed some more. Nathan tried to keep things on track, he mentioned the sales total didn’t include pending orders, but Kevin looked excited to have found a potential victim. He asked the entrepreneur what period the $4,500 in sales had been achieved in.

‘Well there’s an explanation for that’ replied Nathan, unwisely trying to dodge the question, and only gaining more laughter from the Sharks for his efforts. ‘There always is’ replied Mark Cuban, clearly hoping for an entertaining answer.

Nathan explained that the $4,500 in ‘sales’ were actually the pledges the business had received through its Kickstarter campaign, and although they were technically in exchange for Eve Drop products and therefore sales, the explanation didn’t help his credibility. He revealed that the molding design required to complete the production process was only just complete, but he was yet to receive the final molds from abroad. It now became clear that sales were not on-going at the current time for the Eve Drop business.

The subject of cost came up and Nathan confirmed that a pack of the Eve Drop bracket system retailed for a reasonable $9.99. Robert Herjavec inquired how many packs would be required to cover an average sized home and Nathan admitted it would take about five.

‘That’s not cheap’ observed Mark Cuban and Nathan agreed it wasn’t, but he was quick to point out that it was a one time expense, for a system that could be used year after year.

Barbara Corcoran wasn’t swayed by Nathan’s arguments. She explained her own mom had taken great delight in putting up Christmas lights easily every year, simply by hammering a few nails into the eaves of the house. Such a simple, and considerably cheaper, solution had been good enough for her.

The sharks admired the ingenuity of the senior Mrs Corcoran for a moment as Nathan desperately tried to get a word in, but Mark Cuban got one in first. The Texan billionaire told Nathan that because Barbara’s mom had been smarter than him, he was out. Enjoying the festive atmosphere, the other sharks unanimously took that first rejection as a sign Mark was the Scrooge amongst them, and treated him to a round of jeers. Unconcerned, he smiled through it, perhaps making a mental note to try out the nail trick for himself.

Kevin O’Leary spoke next, and although not as vicious to the likeable Nathan as he often is to applicants with less than stellar accomplishments, Mr Wonderful made himself wonderfully clear as he rejected the Eve Drop business.

‘I hate this idea, a lot’ he said, before continuing with ‘It’s very seasonal, retail will be very challenging’. Just to make sure that there were no possible misunderstandings, he summarized his conclusion with ‘Because I hate it so much, I’m out’. It was a mildly delivered dismissal from Kevin and Nathan sounded surprised as he thanked Kevin for his words. Perhaps the other sharks noticed Kevin’s relatively gentle rejection of the Eve Drop entrepreneur too, as Mr Wonderful didn’t join Mark Cuban in receiving a round of Jeers for the rejection.

Robert Herjavec wanted to know where the business currently stood. Nathan informed him that he had invested $30,000 in inventory that he was awaiting delivery of. The business also had pre orders of $3,500 to stock Eve Drop in twelve different retail stores, as soon as the inventory had been received.

Lori Greiner asked why Nathan had ordered such a large inventory, even though the pre orders had been considerably smaller. He explained that he was anticipating a huge increase in demand, during the festive season, but Lori seemed disappointed in the answer, shaking her head slightly.

Nathan elaborated some more, he explained that he had been approached by Sky Mall, who had been interested in featuring Eve Drop in their online shopping catalog, but he had decided against the partnership, because the profit margin from Sky Mall sales would be considerably lower than that received from other sales avenues.

That admission gained him a mild rebuke from Robert Herjavec, who left him with the advice that a new business should never turn down sales, no matter what the circumstances. But that was all Robert had for Nathan, and he too dropped out of the negotiations.

Barbara Corcoran had doubts about Nathan’s personal skills, she told him he wasn’t persuasive. He responded by referring to his successful sales career. She told him he didn’t have the innate abilities to judge inventories and budgets that most successful entrepreneurs did. He made a passionate and well articulated speech in defense of his own capabilities. Barbara was impressed ‘Now you’re selling yourself’ she said, before asking him to give her a few minutes to consider things some more.

Lori Greiner didn’t give Barbara much time to think, she wasn’t seeing the light with Eve Drop or Nathan. The inventory miscalculations were a concern to her, and the holiday season retail period could be very challenging. Lori didn’t believe Nathan, or his business, were ready for a big investor at that point in time, and she was out.

Barbara was the only shark remaining, but unfortunately for Nathan, she was going to extinguish his hopes in the tank completely. Although his heartfelt speech had impressed her, slightly, as to his own talents and commitment, she didn’t think that the Eve Drop system would ever sell particularly well, and with that, Barbara was out too.

Although the sharks left Nathan in the dark when it came to a deal, he believed that they missed the point when it came to his product, and didn’t fully consider the benefits of the concept, such as the time saving aspects of the product, and the potential for stylish back lighting during non festive periods.

In an interview in late 2015, Nathan was proud to announce that sales had more than doubled since the original airing of his segment on Shark Tank, and had again risen on subsequent re-screenings of the episode. At the time he was looking forward to increasing activity again as the holiday season approached, and all seemed to be progressing steadily upwards for the company, but things seem to have taken a backwards step since then.

The company website has closed at some point in 2016, and although it is still possible to buy a selection of Eve Drop products from Amazon, I found many customers on the Eve Drop social media pages who didn’t appear to know of the alternative outlet. Even more worryingly for the business, Eve Drop do not seem to have answered queries from potential customers who are looking to purchase the Eve Drop system. The sporadic updates on the company’s social media pages make no mention of the lapsed website.

Perhaps Nathan has decided to concentrate on other avenues during the non-festive periods of the year, and to ramp up his attention to the business when the orders begin flooding in next holiday season. But as of now in 2018, Eve Drop’s light seems to have dimmed a little since its appearance on Shark Tank, only the future will tell if it re-ignites, or is snuffed out for good.