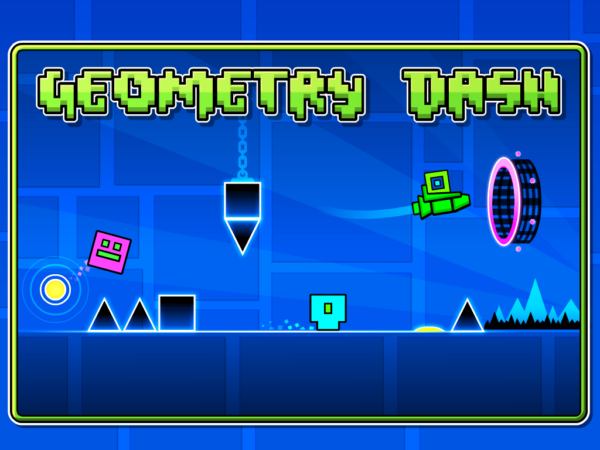 The topic of hundreds of rage quit, lets plays, and just videos of people screaming at their screens, Geometry Dash can make for hours of infuriating, beat dropping fun. With both Steam and mobile versions of the game available, it’s a great way to discover new music, test your focus, and kill some time (unless of course you’re prone to shout obscenities when in public). Here, we will cover 5 Tips, tricks and cheats in how to dominate the levels that have caused thousands of phones and screens to worry about being broken in a fit of rage.

Especially when starting out and learning the different mechanics and traps of the game, practice mode can save plenty of time and tears. While it is true that you will have no official progress of any kind, practice mode for levels allows you to set checkpoints anywhere you like. This is a major advantage, as in the normal game mode, there’s typically very few (if any) checkpoints within a level, meaning one mistake and you are right back at the beginning, wasting plenty of time trying to get back to the trickiest part of the level thus far. As a general rule, if you know there is a trouble spot coming up, try setting a checkpoint around 3 to 5 seconds before the trap, as it will allow your eyes and nerves to adjust to the pace of the level instead of coming straight from stillness, which can cause a bit of a jarring reintroduction.

Geometry Dash Tip, Trick or Cheat #2: Don’t Give Into Temptation

Through most of the game, levels will feature a few secret coins that can be collected by taking a risk and going off the path of least resistance. If you have not previously had much success in a level, it’s best to not worry about the coins for now. Making note of them is a fine idea though, so when you are comfortable enough with a level to pass it without much stress, you can go for the added challenge and reward. The coins aren’t very necessary regardless, as they only unlock player icons or for the particularly mentally masochistic, demon difficulty which is truth in advertising if there has ever been such a thing.

Geometry Dash Tip, Trick or Cheat #3: If You Can’t Beat Them, Join Them.

Sometimes to beat something, you need to get another perspective. In Geometry Dash, you can access a level editor allowing you to create your own levels, sync them to music either already available or in your own collection, and most importantly, allow you a new method of thinking about level design. Despite many of the levels having vastly different aesthetics and even custom traps being made by users, most carry a great number of similarities which become easier to predict after one has taken the time to make a few levels of their own. This is also a great strategy of practice for yourself if you find yourself struggling with certain level types, like the space ship levels; Just create a run where you are in the vehicle a vast majority of the time to get used to controlling it and before you know it you’ll be an ace.

Geometry Dash Tip, Trick or Cheat #4: The Music Will Not Set You Free

Geometry Dash has one of the best game soundtracks of all time, and the fact that it’s constantly expanding is amazing. With some of the best electronic, dubstep, nightcore, and even classical music out there being a feature to this platforming game, it’s hard to give this bit of advice. If you find yourself having trouble passing a level, try turning down or turning off the music. The reasoning behind this is that the music is often repetitive and rhythmic which permits the mind of the player to at times assume that the pattern of the platforms somehow link to the music. While this is often true, this can be used to trick the player into falling for a false cue of a jump and landing in spikes instead of o the podium. Likewise, while we have all heard of sick beat drops, some players may find the drops on some levels to be quite lethal.

Geometry Dash Tip, Trick or Cheat #5: In All Things, Be At Peace

Part of the appeal of Geometry Dash is exactly how infuriating it can be. In fact, one could say that frustration is a key mechanic to the game itself. In fact though for most games repeating a task time and time again makes your actions more refined, the added factor of irritation will actually cause your motions and response time significantly more erratic, causing further errors and feeding into a cycle of frustration and error. So to beat the system, our final tip is a bit of a mind hack; when playing take breaks frequently, and during those breaks take actions that have a calming effect. Such actions could be making a cup of chamomile tea, doing slow breathing exercises, or just listening to the soundtrack of the game itself without playing. Using a combination of the last two may in fact cause a positive association between the common themes in the music of Geometry Dash and feeling calm, which has a chance at enhancing your game play.