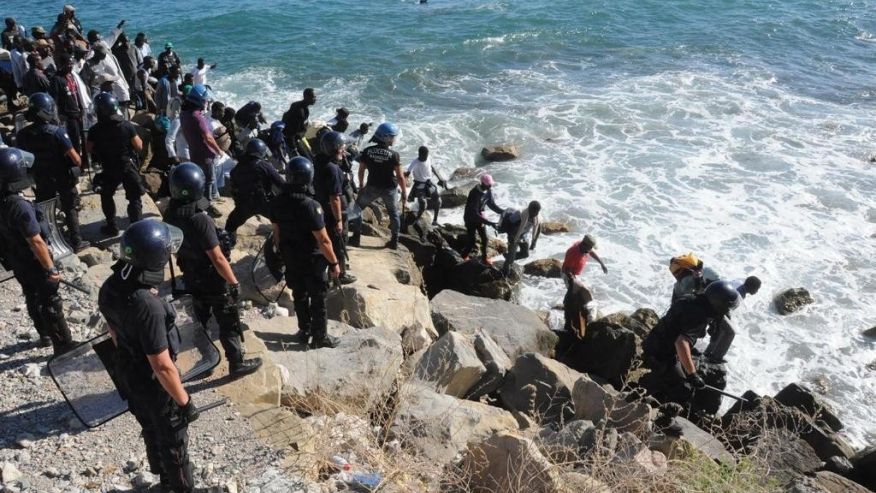 The migrant crisis in Europe has seen thousands of people walk hundreds of miles and evade border forces to enter other countries. A few hours ago, Italian police were surprised by more than 100 migrants, who had decided to cross to France.

The Italian border town of Ventimiglia, had police barriers at the time but they were surprised by the group of more than 100 migrants. The news were confirmed by the local Italian police chief.

The group stopped on the rocks near a port to evade border forces after breaking through yesterday. The police commander of Ventimiglia, Giorgio Marenco said the group was still there and were under surveillance of French police. In the pictures taken by the media and residents, migrants are seen jumping from a wall to the rocks next to the sea.

Marenco spoke with Reuters and said that both the Italian and French forces at the border were taken by surprise. Videos and pictures of the migrants jumping from the walls to the rocks surfaced shortly after group broke through. In one video, the migrants are seen walking on the rocks and some even decided to walk into the sea after seeing the police. Details on how they broke through the police barrier have not been revealed.

Italy has received thousands of migrants since the crisis began and many more arrive to the country every day. Last year, a migrant camp was set up near the town but earlier this year, police decided to close the camp.

The European migrant crisis began last year, when thousands of refugees started making their way to Europe. Many of them are coming from countries where there are conflicts. Most of the migrants travel across the Mediterranean Sea to get to Europe.

Three months ago, it was reported that Italy had surpassed Greece as the entry point for migrants. Estimates say that more than 70,000 migrants have arrived in Italy by sea this year. In April, it was reported that more than 181,000 migrants and refugees had arrived to Europe in 2016. Some decide to stay in the countries but others have continued walking and crossing to other countries. The majority of the migrants are coming from Syria, where a civil war began five years ago.

Hours after breaking through and walking on the rocks and sea, France returned around 200 migrants to Italy.