The Mission Belt After Shark Tank Update – Now in 2018 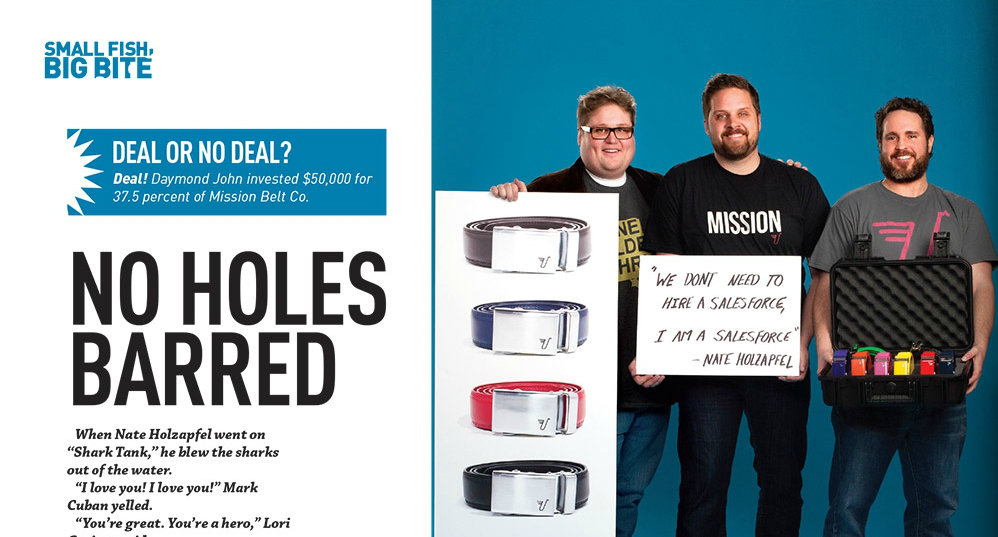 The Mission Belt Before Shark Tank 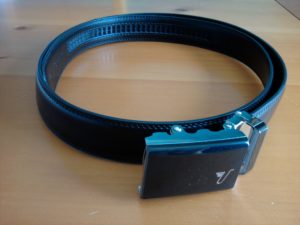 Nathan Holzapfel came up with the perfect business plan when one day he re-envisioned the men’s belt. What he created was a sleak, sophisticated belt made out of high grade leather, but what is different about this particular belt is that it has no holes. The purpose of this is pretty simple. Now you can have a belt that will have a custom fit to anyone’s waist and you won’t have to go piercing new holes into it when the belt becomes a little too small or big for you. In addition to be a form fitting outfit accessory, Holazpfel wanted to make sure that his product was affordable to almost anyone. Designer belts can cost and arm and a leg, so he wanted to make something just as classy, but have it remain within a reasonable price range.

And as if that wasn’t good enough. Holzapfel is an entrepreneur with a dream to change the world. When he created the Mission Belt, he wanted to put his potential success and profits towards a good cause. With each belt his company sells, $1.00 of that goes to funding micro-loans through Kiva.com. Why? Well, Holzapfel wants to help bring an end to, or at least a decrease in world hunger. These micro-loans are a good alternative to just sending food because these funds provide the education and resources necessary to teach people living in poverty how to grow and cultivate their own food sources.

Wanting to find a partner who has a little more experience in the marketing industry, Holzapfel decided to take his Mission Belt to the Shark Tank. He hopes that at least one of the Sharks will see the potential and higher purpose for this business and give him an investment, because he could use all the help he can get in order to really launch this business towards success.

The Mission Belt on Shark Tank

Holzapfel enters the Shark Tank seeking a $50k investment in exchange for a 20% stake in his business. Then he begins to dive into his pitch, explaining that most people have at least one belt in their wardrobe, if not more. And since the time the belt has been created, there has been no changes in its design. Someone people might argue that “if it’s not broke, don’t fix it”, but the Mission Belt brand wanted to challenge that idea by reinventing this classic accessory. Holzapfel demonstrates the new design for the Sharks, revealing to them that the belt no longer has holes, but a new ratchet system instead. All you have to do is slide on the belt and pull it for however many clicks until it feels comfortable around your waist. Then, when it’s time to take it off, there is a release button on the buckle of the belt that will allow you to remove it. 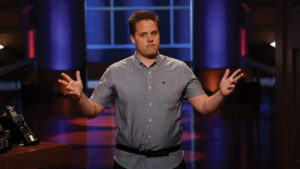 After finishing his speech, Holzapfel hands out belts for the Sharks to feel and examine. Robert Herjavec is the first to notice the quality of the belt and asks if he manufactures them himself. The Mission Belt brand commissions a manufacturing company to produce the belts, but Holzapfel sells them himself. But he explains that the Mission Belt is particularly unique because of it’s sleek design and the high quality of its materials, but it is also kept in an affordable price range. There is no other belt like it on the market.

Kevin O’Leary asks about the business plan to get this product into all the major retail clothing stores and Holzapfel explains that he is standing there before them for that very reason. As of right now he is able to supply his belts to a few country clubs in addition to locally run men’s clothing stores, but he wants to take the Mission Belt further than that. His charismatic personality makes him a good salesman, but he needs the help of a partner to get him in front of the right people so he can start expanding the business.

Despite not being known on a national basis, the Mission Belt has been experiencing great success in the places it is sold. At one location in particular, they sell around 250 belts a month and each belt costs $35. In the last 3 months, they managed to sell around $39k worth of inventory. The Sharks seem to be pretty impressed with this considering he is only selling belts.  Mark Cuban asks how much it costs to actually make one of these belts, which he finds out to be only $6.00 a unit.

One issue that Lori Greiner points out is that it is hard to know what makes the Mission Belt so special by the simple branding of it. There is no way of knowing that this belt has an innovative ratchet system which sets it apart from all other belts. Holzapfel explains that he has been taking a very hands on approach to getting people to understand his product by actually visiting his vending stations and showing people how it works. It doesn’t stop there though. Holzapfel is very passionate about his business and isn’t afraid to do what it takes to get it out there on the market. A few hours after checking into his Los Angeles hotel room, he went around door to door selling some of his belts. Cuban seems to really admire the kind of initiative that he is willing to take for the sake of his business.

Greiner is the first to make her decision on whether or not to invest. She really thinks that this product could be successful and she believes that men need a product like this, but she worries that the lack of demonstration will hinder sales. It would be incredibly difficult for big stores like JC Penny’s to properly advertise the belt, meaning it could get lost in all the other products. For that reason and that reason only, she decides not to invest. Next up is O’Leary, who holds a similar view to Greiner. He tells Holzapfel that he loves the belt and will be buying one for himself, but distribution would be too big of an issue for him to deal with so he can’t invest into it.

An issue that Cuban has is, what if a man is a little on the skinnier side? If there’s too much extra material hanging off after the belt has been buckled, it would be simple enough to just cut off what you don’t want. However, Mission Belts are sold in sizes ranging from small to extra large, which caters to a wide array of body types.

While Cuban ponders that explanation, Herjavec tells Holzapfel that he doesn’t think he has the proper connections that he needs to get this business out there on the market. That leaves only two Sharks still in and Daymond John is the first to make an offer. He is willing to put up the $50k, but he wants 40% of the company. His plan is to take the belt and license it to another company to manufacture, but he wants Holzapfel to remain as the head of sales, which he would get a decent commission for. Holzapfel counteroffers, asking only to give up 30% of the business, but John said he’d only be willing to go as low as 37.5%. Deciding that this is the best offer he is going to get, Holzapfel enthusiastically agrees to go in on a partnership with him. 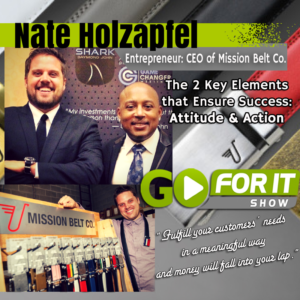 Immediately after making the deal with Daymond, Mission Belt made $180k in sales, then about $1 million in a single month. Daymond and Nathan worked so well together and created such a successful business plan that they were later on track to make over $5 million in a single year. As a result of finding the road to success for his business, Nathan was able to create a variety of new designs for the belt, allowing him to appeal to a boarder audience. Mission Belt now makes belt buckles that have sports team logos on them and a few general clothing items as well.

If you are interested in purchasing a belt for yourself or a loved one, you can browse all their options on their
website http://missionbelt.com/. Also on their website is a segment dedicated to the Mission Belt’s “mission”. It gets in depth with the organization that the proceeds go to and talks about how each belt sold helps a person going hungry in another country. Nathan said that taking his business to the Shark Tank was the best decision he ever made, and it’s pretty clear now that he wasn’t wrong in saying that. Not only did he reach success for his business, but he is now capable of making a real impact on the world because of it.

Alyssa Ralston
Alyssa is a freelance writer who lives in Philadelphia and is an English student at Temple University. She enjoys traveling and making new experiences, but spending a night at home with a good book is equally as pleasant.
RELATED ARTICLES
Business