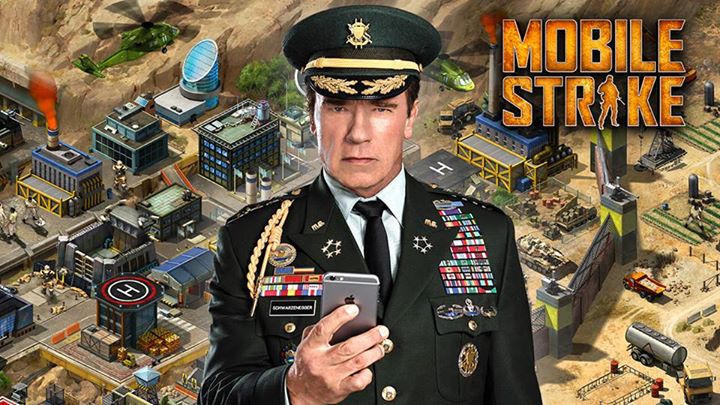 Mobile Strike is a mobile strategy game that pits you against other players on a global scale. Proper troop and resource management is crucial if you wish to succeed in this game and not become fodder for other players.

If you are a new player or a veteran looking for cheats, tips, and tricks to improve your game  in 2017 then read on. 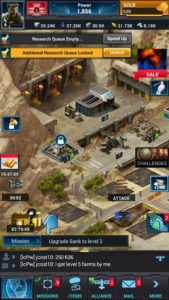 Mobile Strike offers plenty of slots where you can place your buildings. The ability to demolish buildings for free allows different kinds of layouts that fulfill different purposes.

During the early stages you should only have a few Training Grounds. Focus on building many Banks and Hospitals within the walls. This way you can have a good flow of Coins and at the same time minimize the number of casualties in case of an attack. When you get to higher levels you can swap out Hospitals with more Training Grounds especially when your army size has grown to millions.

Outside the walls are the plots for your resource-generating structures. Early on you should maintain an equal number of buildings for each resource. Later on you should increase Food production as your army grows. 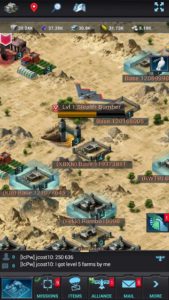 The success of an attack in Mobile Strike depends on many factors like troop type, army size, equipment, and the commander level. A player’s power level and scouting the base is among the ways you can make sure if your opponent can be safely attacked.

In the early phases of the game you can simply rely on the power level. Only attack if your level is higher than your target’s, and do not push through if you are of equal footing or if the enemy outranks you (obviously). Later on do not rely on the power level anymore as some players deliberately lower their ranks to lure in attackers. Instead you should check their base and take note of the following:

Consider the tier of the troops you are training. Obviously the T4 troops are the strongest but the T3 ones are just good enough. T3 troops cost less than T4, take less time to train, and give less challenge points when killed. Once you unlock T3 troops you should focus on training them and there’s no reason to use the lower tiers anymore.  Only rely on T4 when you need to completely obliterate an enemy regardless of the expenses.

Keep in mind to always keep your Training Ground busy. Do not close the game without training troops especially when you are about to sleep. In the early levels you won’t be able to do this a lot as you’re still strapped with resources. Always remember that time is also a resource of sorts and it is imperative that every minute that ticks contributes to the strengthening of your base.

On the defensive side of things the best way to protect your base is of course to spend Gold in buying a Peace Shield. This is ridiculously expensive but it is your only assurance of being left alone by other players until the shield expires.

Minimizing the deaths of your troops is equally important given how expensive it is to replace your fallen soldiers. Here is a trick if you want to protect that small army of yours while you sleep. Find an enemy base that’s far from yours. Tap it and then choose Rally. Send off all of your troops including your commander and choose 8 hours for the start time. Now when you wake up do not forget to cancel it. This way your men will be safe from harm while they “march” towards the enemy base until you recall them back home. If you are a member of an Alliance then you can contribute your troops (except for your commander) to their own “Rally”.

Another trick is to donate your troops to your fellow Alliance members through the Embassy. Your troops will come back home when your ally refreshes his / her Peace Shield.

Finally you can deploy your troops to a nearby empty tile to hide them from prying eyes. Just pray that your opponent won’t think of scouting those seemingly barren tiles only to find your men camping out.

Invest in traps to help protect your troops from attacks if your army is too large to be hidden using the tricks mentioned above. Build a lot of Sand Bags as they get the job done without much cost. 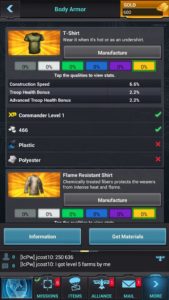 Gears provide different kinds of boosts ranging from combat to research speed. The higher the gear’s rarity then the better the boost it provides, albeit it is a lot more difficult to manufacture.

Combat gear enhances the attack capabilities of a certain type of troop. These gears should be manufactured later on in the game as fights in the early stages do not demand powerful troops yet. Do not waste your materials in manufacturing combat gear that are below Legendary quality to obtain the best boost available. Also you should focus on manufacturing gear that enhances the type of troop you always use.  You don’t want gear that only strengthens Infantry Attack when you primarily use armored vehicles.

Manufacturing research gear like the Tactical Laptop and Field Scientist Uniform reduce the time it takes to complete a research. It would be best to prioritize the creation of equipment in this category as research takes a lot of time.

Construction gear boosts the build time of your structures. This isn’t much of a priority as building things don’t really need to be rushed.

Mods are like attachments that you insert in your gear to bestow then with additional benefits. There are around 20 mods available in Mobile Strike and more are sure to follow in future updates. You can obtain mods through alliance gifts, winning challenges, and in daily rewards. If your alliance has a high gift level then there is a good chance that you can obtain good mods.

These mods come in different levels. It is generally suggested that you do not use high level mods in low level gear as replacing cheap equipment with better counterparts is inevitable. Also you should only insert mods that match the gear’s boosts. You shouldn’t attach combat mods in gear that enhance your economic capabilities. It is possible to remove attached mods with a “mod saver” that becomes more expensive depending on the level of the mod being removed.

If you want to, you can slap low level mods on the first few pieces of equipment you obtain during the early stages of the game. At least with this method you can benefit from small boosts while you work on towards acquiring better replacements. Alternatively you can just save up all of your mods and use them only for combining to unlock higher levels.

A good tip for gears and mods is to have a full set ready for different situations. Suit up your commander from head to toe with equipment that boosts your economy so you can maximize resource generation while you’re away. Have another set that’s tailored for combat situations, research, etc. 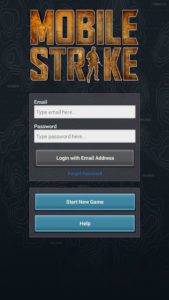 Mobile Strike is very lenient when it comes to juggling multiple accounts. With this in mind players create secondary accounts that are used for extra resource production.

Aside from using another mobile phone you can create as many accounts as you want with just one device. First thing you should do is to link your primary base with an EW account (Tap More then EW Account).  Once your email is confirmed tap log out then start a new game. Complete the tutorial then create another EW account and confirm the email. Now you can freely log out and open your primary and secondary accounts just by logging in with your provided email and password.

If you decide to create a dozen or more accounts and you’re having problems with having that many email accounts then I suggest you use a disposable email address like Guerrilla Mail. Just don’t lose the password of your bases.

Now that you have set up your alternative bases, focus on setting them up for producing each of the resources. Build and upgrade resource structures , research economic boosts, build Banks, and finally a Trading Post. Send the resources produced by these secondary bases to your primary account. Keep in mind that these farming bases should not go past level 9 to avoid the possibility of having your commanders captured which can interrupt production.

As for Gold you should always be wary of hacks or cheats that offer unlimited resources in exchange for a download or inputting your personal information. These do not work and can only jeopardize your account or device. Avoid at all costs.

There we go with the cheats, tips and tricks for Mobile Strike. Just remember to keep on training troops, hunt for good gear and mods, and ensure the constant flow of resources. Good luck and have fun!