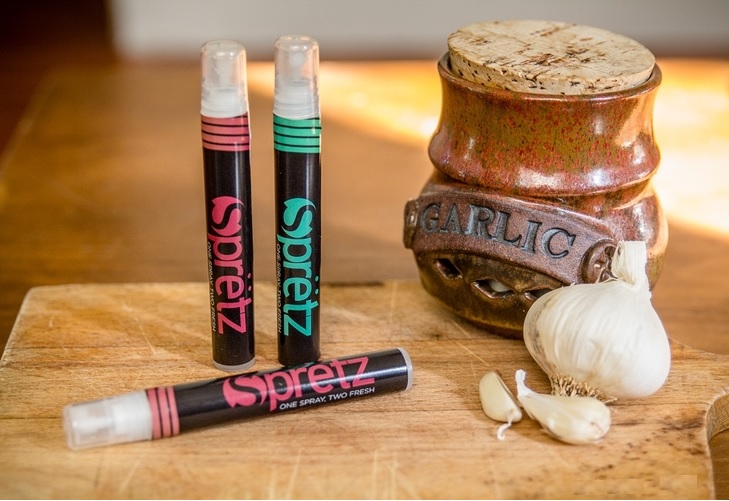 Tony Gauthier was hosting a fund raising event in his home town of Oakland, California when he began to feel the need to indulge in his secret vice. Tony was a secret smoker, and took the opportunity to pop outside for a quick fix, during a brief intermission in the event. Afterwards he realized that although he had gum to mask the smell of smoke on his breath, he had nothing that would make his hands smell fresh. Concerned about the amount of hand shaking he would be doing later that evening, Tony decided to spit on his hands, in a desperate attempt to disguise the smell with some minty saliva. It was in that slightly gross moment that he had a flash of inspiration.

Tony knew that not only smokers ended up with smelly hands and breath, it was also a common problem with garlic, coffee, cheese and fish, amongst other pungent products. He saw a need for a product that would eliminate unpleasant odors completely, from both breath and hands, and he embarked on the road to developing one. He joined forces with a certified chemist and after a research and development period, during which several variations of the idea were tested, the Spretz spray was eventually created.

Tony came into the tank, along with Creative Director Scott Hoag and consultant Wesley Osaze in January 2016, and was seeking a $100,000 investment in exchange for a 20% stake in the company.

The pitch was unusual, the three entrepreneurs formulated the whole of Tony’s story of sudden inspiration around a well rehearsed hip-hop style presentation. It was a fairly unique approach and it sounds a little cheesy, but the three must have rehearsed their lines long into the night on multiple occasions. The whole thing could have fallen flat but they somehow made it work. It finished up with them all holding out their Spretz sprays and chorusing ‘Welcome to the future of Fresh!’

Robert was impressed, ‘Boom!’ he exclaimed and Lori applauded, Mark Cuban wondered aloud how much practice the pitch had taken to get so perfect.

Samples of Spretz in both Peppermint and ‘Cinnamint’ were handed out to the sharks and they seemed to find it pleasant enough. Robert remarked it was strong, and Lori commented how nicely refreshing it was. But Kevin O’Leary found the packaging less refreshing.

Wesley explained that the packaging would be redesigned in the future, to make the function of Spretz completely clear to consumers.

Mark Cuban inquired if the product was being sold already or if it was pre-sales. Tony replied that the product sales so far, of approximately 1,000 units, had been more of a proof of concept and test of the market, rather than a full launch of the product.

There was a moments silence as the Sharks digested the less than impressive sales history, eventually Robert Herjavec asked about the retail price of the spray. $3.95 confirmed Tony quickly, appearing quite eager to move on from the sales figures.

Kevin O’Leary, far from surprisingly, wanted to mull over the sales a little more. He asked for clarification that only 1,000 units had been sold. Tony confirmed that was true. Kevin asked ‘How many dollars is that?’ and Tony stumbled slightly, sensing an imminent explosion from Mr Wonderful, before finally confirming that total sales had been thirty five hundred Dollars. ‘Thirty Five Hundred’ repeated Kevin, emphasizing the word hundred and letting it sink into a suddenly awkward silence.

Tony found a voice to speak with eventually and explained that the company had spent no money on marketing or promotion at all so far. Lori asked how long the product had been on sale for. Tony confirmed that Spretz had been sold for only two months, and suddenly the sharks seemed a little less hostile.

Lori was interested, she asked Tony to conduct an experiment, she told him to spread some garlic over his hands, which he did. She then checked to see that his hands were suitably pungent and sprayed them to see if the aroma was masked. Tony proffered his hands but the Queen of QVC didn’t seem sure of the efficiency of the spray either way, she asked Tony to wait a few minutes before she concluded her testing.

Mark Cuban spoke about the use of the product, he thought it was a potentially good idea, but it was a new one, most people in need of Spretz would usually just wash their hands instead. In order to market the product it would take a million dollars at the very least. Mark was unable to see a future for the business, and he was out.

Kevin O’Leary wasn’t one to get misty eyed if he didn’t believe in a business, and he didn’t believe in Tony’s strategy for the future of Spretz. He said ‘Great Passion, but we have to deal with the economic realities’. He then asserted that he was in agreement with Mark Cuban, $100,000 was just not enough to market the product. With that, Kevin joined Mark in dropping out of the negotiations.

Barbara Corcoran had been silent to this point, and now she had good and bad news for the Spretz businessmen. She thought the product could be marketed for as little as $250,000, if the money was used wisely. Kevin O’Leary asked her if she was going to invest a quarter of a million in the business. Barbarta waved at him to be quiet and continued speaking. She admired the passion of Tony and his attitude to business, but she didn’t think he was wise to put all his faith in the Spretz spray. Barbara saved the bad news for last and asserted that although she believed in the three entrepreneurs, she didn’t believe in Spretz, and she was out too.

Robert Herjavec spoke up next. He essentially echoed Barbara’s sentiments as he dropped out too. The enthusiasm, passion and commitment of the Spretz three had impressed him greatly, but he couldn’t see any real future for the Spretz spray itself.

Lori Greiner was the only shark left, she called Tony over and asked to smell his hands again. There was a brief moment when things seemed suddenly more optimistic for Tony as Lori exclaimed ‘The garlic is gone, it works!’, and Tony pumped his fists in celebration.

‘Come on Lori!’ he urged her, almost shaking in anticipation.

Unfortunately for Tony, and the Spretz business, Lori wasn’t going to ‘Come on’, but her assessment of Tony and his colleagues was about as glowing as it could be. She described them as ‘amazing’ and asserted how much she believed in them, but she hit the nail on the head when she explained that there wasn’t a great need for a hand freshening spray. She believed that most people would simply wash their hands, or use a hand sanitizer, if unclean hands were a problem for them. She urged Tony and his colleagues to ‘Grind’ away on other problems until they came up with a better product. With that, Lori dropped out too, leaving Toni, Scott, Wesley and Spretz without a deal, but she left them with a good chunk of inspiration too, and it didn’t cost them a penny or a percentage of their equity.

Spretz Now in 2018 – The After Shark Tank Update

Things don’t seem to have changed dramatically for Spretz since their appearance on Shark Tank. A three pack of Spretz is selling for $9.99 on the company website, but Amazon sells a single spray for $7.98, plus $1.99 shipping, and many of the customers reviews on Amazon seem to be negative with regards to the price. The Spretz company appear to have let their online marketing strategy fall behind a little since their appearance, and not only with the price of their product. The Spretz website itself is a little unwelcoming, with blinding white backgrounds on every page, and it’s also a little sparse in content. The whole site has the feel of a business that’s not really going anywhere, or even worse, one that is being allowed to slowly die.

In spite of a lacklustre online presence, Tony has recently revealed future plans to extend the Spretz range. He hopes to launch Citrus and Vanilla Lavender flavors and has also suggested the company may diversify into natural air fresheners for the home. He has hinted at a wholesale deal in the future that could see Spretz retailing in a number of stores, but there is no concrete news about such a deal as yet.

Despite all of the publicity that a Shark Tank appearance would have given the company, they don’t seem to have taken advantage of it much at all, but perhaps the problem for Spretz has never really been about marketing, it’s more to do with demand.

There’s a disclaimer on the Spretz website that reads ‘Spretz is not a substitute for good hygiene. Spretz is most effective when used in addition to a proper daily hygiene routine. It is not a substitute for washing your hands or brushing your teeth’, and that is the fundamental problem with the product. People who have an urgent need to have clean hands, for whatever reason, are highly likely to have access to that most effective of all sanitizing products, simple old soap and water.

I’m a smoker. Just like Tony at his fund raising event, I occasionally prefer to pretend I don’t partake in such an unhealthy habit, but unlike him, I usually head for the bathroom before I feel the need to spit into my hands. The Spretz entrepreneurs had a great pitch, plenty of passion and valued their company modestly, but they had a strategy centered around a product that no one actually needs too much. The business moguls admired their innovation, commitment and ability to stay cool under pressure, but when it came to the Spretz spray business, the sharks preferred to wash their hands clean of the whole thing.