The Top Ten Richest Tennis Players in the World – 2018 Update 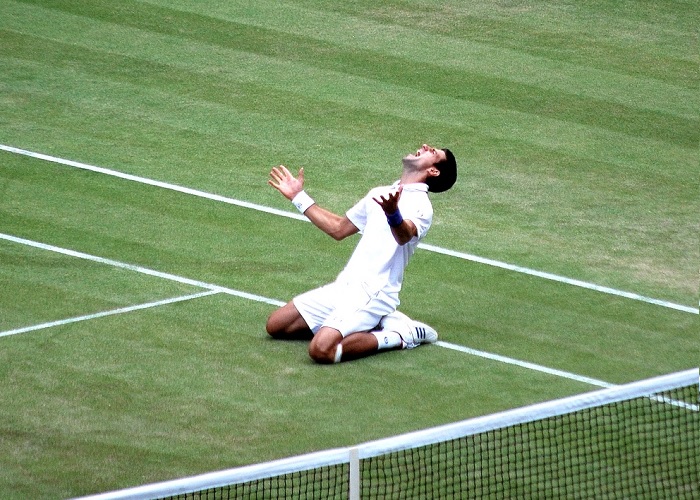 Tennis has enjoyed an explosion of interest in recent decades, and along with that popularity the best players can now enjoy the benefits of millions of dollars in winnings, along with millions more in sponsorship deals for the biggest celebrities of the sport. But just who are the ten richest tennis players of all time? Read on to find out who has benefited most from their prowess on the court. 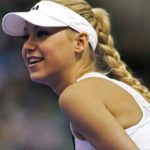 Anna Kournikova was born on June 7th 1981 in Moscow, Russia. She came from a sporting family, her father was a former Greco-Roman wrestling champion and her mother had been a successful athlete. She began playing tennis at the age of five, just for fun, but she showed great early promise. Anna began playing junior tournaments in 1989 and quickly received attention from international scouts. In 1991 she moved to Florida to train at the Nick Bollettieri tennis academy and quickly became prominent in the global tennis scene. Anna won the European Championships at 14 and was awarded the ITF Junior World Championship in the same year, but her potential in singles competition was never realized. In doubles, alongside World no. 1 Martina Hingis, the pair achieved far greater success and were known as the ‘Spice Girls of tennis’. Unfortunately, before she could ever achieve the same success in singles, Anna’s career was cut short at the age of just 21 when she suffered serious back injuries, including a herniated disk. A US citizen since 2010, she now resides in Florida with husband Enrique Inglesias and plays occasional exhibition matches for charitable causes. 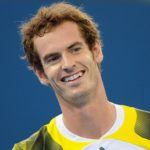 Andrew Barron Murray hails from Dunblane in Scotland. In 1996, aged just nine, he and older brother Jamie were survivors of the Dunblane school massacre in which 16 fellow students were killed by a crazed gunman. His father had been a professional soccer player in the 1950’s and Andy was offered the chance to train with Rangers soccer club, but instead chose to concentrate on tennis. He was coached at the Sanchez-Casel Academy in Spain with Emilio Sanchez, the former World doubles no.1, and he became professional aged just 16. Just one year later, in 2006, he became the British no.1 and joined Rafael Nadal to become one of only two men to defeat Roger Federer that year. By 2009 he was the World no.2 and won for the first time on grass at the Aegon Championships, the first British player to win there since 1938. He was elevated to legendary status at home in 2013 when he won the Wimbledon Championships, the first British man to do so since Fred Perry in 1936. In the 2016 Rio Olympics Andy, now 29, become the first tennis player to win back-to-back Olympic gold medals. 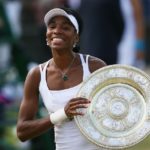 There can be only one name that comes to mind when you consider the most successful female tennis players in the 21st century, Williams. Serena was born in Lynwood, California in June 1980 and along with younger sister Venus has dominated the sport since the dawn of the new millennium. The Williams sisters were coached by father Richard and often played on neglected public courts in Los Angeles, full of pot holes and occasionally missing nets, but those humble beginnings produced incredible results. After turning professional in 1994 Venus accumulated seven glad slam titles by her own efforts, and achieved another fourteen titles alongside her younger sibling in doubles, where they proved to be an almost unbeatable combination. Venus won three Olympic Golds with Serena in successive games and in 2000, at the Sydney games she picked up a Gold in the singles as well, becoming only the second women to win gold in singles and doubles at the same games. 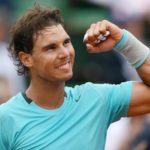 Rafael Nadal was born in Spain in June 1986, and has since become widely recognised as ‘The king of clay’ as he is generally considered to be the greatest clay-court player ever. His uncle Toni Nadal was a former professional tennis player and encouraged Rafael to play from the age of three. Early successes in regional championships led Rafael to turn professional in 2015. He has been ranked World no.1 many times and has won 14 Grand Slam titles during his career. He won the French Open in every year from 2005 to 2014, with the exception of 2009 when he lost to Swede Robin Soderling in the fourth round. Now aged 30 his career has been beset by injury problems since 2012 but he still competes at the highest level of the sport, winning an Olympic gold in Rio 2016 in the mens doubles alongside Marc Lopez. 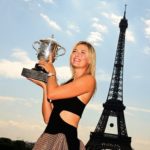 Maria Sharapova was born in April 1987 in her native Russia, and although she represents her home country on the international stage, she has lived and trained in Florida since 1994. Six foot two inch Maria became known for the blistering power and deadly accuracy of her serve soon after becoming professional in 2001, and she has been one of the highest ranked female players throughout her long career. The majority of her earnings come from endorsements and sponsorship, but her career was dealt a blow in January 2016 when she tested positive for the anti-ischemic drug meldonium, used to aid blood flow in patients with heart conditions. The drug was banned for competitors from 2016 and on June 8th 2016 Maria received a two year suspension for using the drug, she plans to appeal the decision. 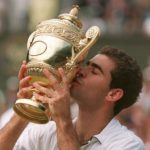 Pete Sampras was born in 1971 in Washington DC, to Greek-American parents. From his early years he showed great athletic ability but it was not until his family moved to the warmer climate of Palos Verde, California that Sampras began to show an interest in tennis. Young Pete was a big fan of Australian tennis legend Rod Laver and he met and played with him in 1982. Pete became professional in 1988 and quickly became known for his incredibly accurate serve, as well as his aggressive style of play, often taking up position at the net and blasting his opponents off of the court. After his first Grand-slam victory at the US open in 1990 the press soon labelled him ‘Pistol Pete’ in recognition of his deadly serve, which would often be delivered above 200km/h. Sampras dominated mens tennis throughout the nineties and was ranked no.1 in the ATP for six consecutive years, from 1993 to 1998, an achievement that has never been equalled. Pete still plays the occasional exhibition match, but these days makes family life his number one priority. 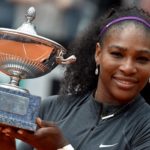 World no.1 Serena Williams is only one year younger than big sister Venus but her impact on the singles game has been far greater. Playing alongside Venus the pair are unbeaten in Grand-slam titles throughout their respective careers, but in the singles competitions Serena has an edge over her older sister. In 27 professional matches between the two Serena takes the lead with 16 victories, six of them in major tournament finals. She shares the record for most Olympic golds in ladies tennis with Venus, at four medals each, but was unable to extend that tally in the Rio games this year. Known for her extensive charitable work Serena has funded schools in Africa and has been an International Goodwill Ambassador for UNICEF since 2011. She has earned an estimated $47 in prize money during her career, and has boosted her income through a number of endorsements with brands such as Nike and Gatorade, that are reputed to earn her at least another $20 million per year. 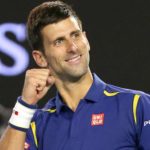 Novak Djokovic was born in the Serbian capital Belgrade in May 1987. His family had strong sporting connections, operating a sports academy where he discovered tennis. He was noticed by retired tennis star Jelena Genic aged six, and was coached by her until moving to Munich aged twleve to continue his training. Coached by Boris Becker in Germany Novak turned professional in 2003 and quickly became known for his speed and athleticism, and for the most devastatingly powerful backhand possessed by any other player. Novak is currently no.1 in the World, the only Serbian player to ever achieve the feat, and he has become the dominating force in recent years across all surfaces. He is known for his amiable personality and comedic impressions of other players and is well respected both on and off the court. Novak is the all time leader in career earnings, winning over $102 million during his career, and his income has been boosted by a string of celebrity endorsements, as well as business ventures back home in Serbia. 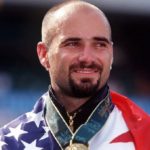 Andre Agassi was born in Las Vegas in April 1970. His father Emmanuel was a former Olympic Boxer who represented Iran in the 1948 and 1952 summer games. Showing great early promise Andre was sent to Nick Bollettieri’s tennis academy in Florida aged 13. His father could only afford to send him there for three months initially, but after Bollettieri had seen the young man play for half an hour he called Emanuel and told him that Andre could train there for free, as he was the most talented youngster Nick had ever seen. Andre’s career, that stretched over twenty years, saw him develop from the bad boy of tennis into a highly respected ambassador for the sport. His personality and exciting playing style have been credited with revitalizing the sport during the nineties, and his rivalry with Pete Sampras became legendary. Andre retired due to back problems in 2006 after accumulating career winnings of over $30 million and now concentrates on charitable work for disadvantaged children as well as his family life with wife Steffi Graf. 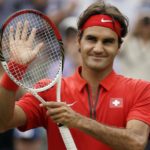 Roger Federer is generally considered by many coaches, and past and present players, as the greatest tennis player of all time. His versatility and ability on all types of surfaces has elevated him into a league of his own, and the results of his brilliance have served him well, gaining a huge bank balance and annual income. He is second only to Novak Djokovic in terms of career earnings, having won over $98 million during his career, but his endorsement deals with a diverse range of companies, including Nike, Rolex and Mercedes-Benz have boosted his earnings to at least $60 million a year. Roger is known for his calm attitude on the court and he has never given way to outbursts of anger at unfair decisions whilst playing. With seventeen grand-slam titles, including a record breaking seven wins at Wimbledon, during his eighteen year career, the now 35-year-old player is preparing to concede his place at the top of the tennis World to one of his younger rivals, but he expects to continue playing for at least another three years. He has been heavily involved in philanthropic activities, including The Roger Federer Foundation, which helps disadvantaged children throughout the World.