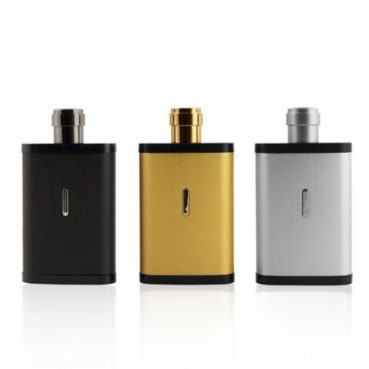 The Utillian 650 and 651 vaporizers are dry herb vaporizers, brought to you by the brand-new company, Utillian. The 651 is the more recent re-release (and hypothetical little brother) of the 650, so the scope of this review will be to focus on the 650 and occasionally chime in when the 651 has a very large difference.

Looking at the Utillian 650 right away yields an interesting thought – the thing looks very much like a flask vaporizer. The Utillian 650 and 651 has a mouthpiece coming out of the top which connects to the lower chamber, where the herbs are actually heated and vapor then travels through the tube to the user. The Utillian 650 has a ceramic heating chamber, while the mouthpiece is a heat-resistant silicone cap that firmly squeezes into the unit. The “cap” of the flask is designed to be able to screw and unscrew, which really lends itself to the whole flask aesthetic.

The Utillian 651 has the exact same aesthetic, although it now has a silver cap and a glass mouthpiece instead of a silicone mouthpiece. The Utillian 651 also comes in a variety of more colors, while the 650 is available only in black. The 651 is available in black, orange, and silver. Unfortunately, both the 650 and 651 do not include chambers or addons for e-liquid or wax chambers, which was very surprising; since the Utillian 720 launched and included an addon for wax and concentrates, I also figured that the new 651 model may as well.

In order to access the heating chamber, the user has to head to the bottom of the vaporizer. Unfortunately, this is sealed in by a swinging chamber door, which I was not a big fan of since it seemed like my product could fall out at any time – there is nothing that keeps your product sealed in from potentially dropping out all over the ground.

While the Utillian 650 only has one temperature setting, the Utillian 651 has three settings. For the 650, the only available setting runs at about 170 to 190 degrees, according to a few websites that carry the vaporizer – this means your product will not quite burn, but it will evenly heat and release a pleasant amount of vapor. The Utillian 651 can go up to temperatures of 196 degrees, 204 degrees, and 212 degrees, but also has only one button. 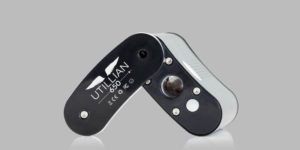 To turn the Utillian 650 on, simply press the power button 5 times. However, the 650 includes a failsafe function that also requires the user to hold the physical power button for 3-5 seconds. The LED will glow red to indicate that it is heating, then green when it is ready to be used. The device will not work if the heating chamber is exposed, so make sure the bottom is sealed up good.

The Utilian 651 requires the user to press the power button 5 times, but then the user has the option to cycle through different temperatures of their liking (these can be found just above). The
LED will glow either green, orange, or red depending on the chosen temperature

The Utillian 650 has about a 3 hour battery life when you are constantly vaping on it, and can hold a full charge for some time. The Utillian 650 and 651 both use proprietary chargers that are capable of working with the same 65x family of devices.

The Utillian 650 is rarely available in stores, which is a great thing – the 651 is really a superior model. The 651 is available for the price of $149.99 on Vaporizera.com, and boasts a strong 4.5 star review. This review is actually a huge improvement over the 650, which is good for Utillian.

Overall, I feel like the Utillian 651 is a great device, but there are a few problems with it that keep me from dropping the money on it. The first major issue I have is the proprietary charger, which means you always have to carry around the charger if you want to use the Utillian 651 for a long time. The second thing is the ease of access to the bottom of the chamber, although I was only able to view a 650 in person and I can assume this has been fixed in the 651 revision. The bottom panel, in the unit I used, just seemed to swing open too easily and posed a threat that all the product could fall onto the floor.

The Utillian 651 is not a bad vaporizer for the investment of $150, and I was happy enough with my limited time with the 650 that I would definitely purchase the 651 without confirmation that the issues with the 650 have been fixed. So, yes, I think I would buy the 651, but it would have to be a more emotional impulse buy. Just spend the extra $70 and go up to the Utillian 720, which is capable of vaping on waxes.