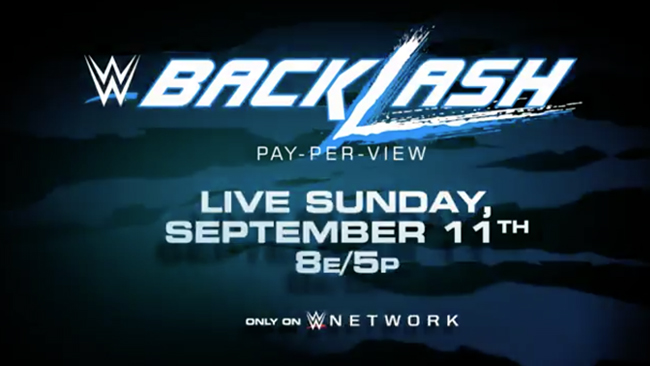 WWE SummerSlam happened last week but there is a new WWE PPV event coming in less than three weeks. That PPV is Backlash, which will be the first SmackDown branded event since the WWE brand split a few weeks ago. Its been nine years since the last SmackDown branded event and while the upcoming PPV has just three matches confirmed, they are all for titles, which means it will be a great return. Here are the matches confirmed, including two for titles that were recently added to SmackDown:

Dean Ambrose faced Dolph Ziggler at SummerSlam and won. Two days later, during the new episode of SmackDown, Styles celebrated his win against John Cena in the locker room. Ziggler wasn’t very happy after losing to Ambrose and Styles made fun of him. He attacked Styles but The Phenomenal One was named the No. 1 contender for the WWE World Championship after winning against John Cena at SummerSlam. Ziggler asked for another title opportunity but Styles later defeated him to keep it a one on one match at Backlash.

The WWE World Championship match between Dean Ambrose and AJ Styles will be very interesting to watch as both superstars have been unstoppable recently.

The WWE Tag Team Champions, The New Day, were drafted to Raw and this left SmackDown without tag team titles. In the past, the two brands had their own tag team championships and that will happen again soon as Shane and Bryan recently unveiled the new WWE SmackDown Tag Team Championships. They announced a tournament that will end at Backlash. The quarterfinals began with a win from The Usos against The Ascension. American Alpha also advanced to the semifinals after winning against Breezango. The Hype Bros will face The Vaudevillains in the next quarterfinals match. 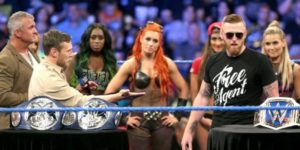 Heath Slater, who made an appearance during the announcement of the titles, was told he would be allowed to participate in the tournament if he found a partner. He was also told that he would need to win the tournament to earn a contract with SmackDown. It looked like Heath Slater would not find a partner during the episode of SmackDown but Rhyno agreed to be his partner. The tag team tournament final for the WWE SmackDown Tag Team Championships will be at Backlash.

The match will be a six-pack challenge between Nikki Bella, Natalya, Carmella, Naomi, Alexa Bliss and Becky Lynch.

WWE Backlash only has three matches confirmed but many more could be announced the next episodes of SmackDown. Bray Wyatt interrupted Randy Orton in the latest episode of SmackDown and this could be the start of a feud. It was rumored before SummerSlam that the two superstars would feud after the event.

After the match between Randy Orton and Brock Lesnar, Shane entered the ring to see what happened to Randy Orton. Brock Lesnar got in his way and then attacked him. This has led to a number of rumors about him facing Brock Lesnar soon. The last time we saw Shane in a match was at Wrestlemania 32 and even though he lost, he impressed fans with a number of moves, including a jump from the top of the cell.

WWE SmackDown will be back on Tuesday with another tag team tournament quarterfinals match between The Hype Bros and The Vaudevillains. The opponents for the team of Rhyno and Heath Slater have not been revealed.

WWE Backlash will be the twelfth edition of this event and will be the first SmackDown branded event since 2007. The PPV will take place on September 11, 2016 at the Richmond Coliseum.

The next PPV that will feature the SmackDown and Raw rosters will be Survivor Series in November.

What did you think of SummerSlam? What other matches would you like to see at Backlash? What do you think of the matches confirmed for WWE Backlash? Let us know in the comments.