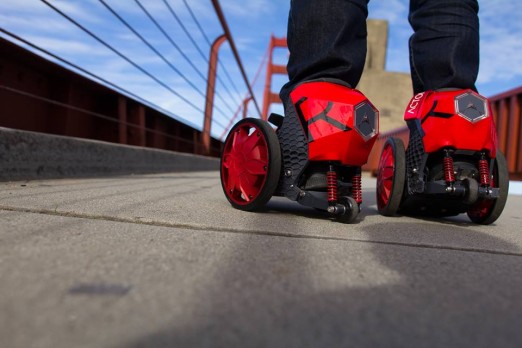 Peter Tredway, from Los Angeles, California, has come to the Shark Tank. His company is Acton, and he has come seeking an investment of $1 million in exchange for a 3.5% stake in his company. Transportation is destined to change, Peter starts. At Acton, they design and manufacture wearable transportation – rocket skates! Rocket skates are the world’s smallest electric vehicle. Step into a pair of rocket skates, and you can go anywhere at any time. Press down on the heel to activate the motors, then push off to glide along. Rocket skates can take you up to 10 miles an hour for up to 10 miles on a single charge.

The Acton rocket skates wirelessly communicate with each other so they always move the same speeds, and they are controlled purely by your feet. With the help of the Sharks, the promise of the future will finally come to fruition. To demonstrate Peter’s point, the man modelling the skates starts to disco back and forth, and even Mark mentions that the “electric boogaloo” is back. All of the Sharks look enthralled, and the second the pitch ends, Robert asks to try the Acton rocket skates. Of course, Peter consents, and Robert immediately turns to guest Shark Ashton Kutcher with childlike wonder. Robert begs for Ashton to come join him, and Ashton relents. 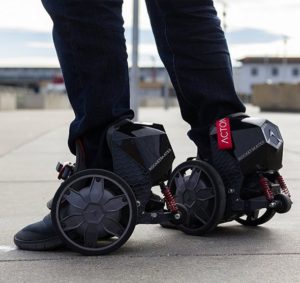 While Peter is strapping Robert’s rocket skates on, Mark asks some questions about the skates. The most accurate way to describe them, Martin says, would be like a segway for your feet. Robert slides his right foot in to the rocket skate in dress shoes, meaning that any shoe, other than heels, will work appropriately with the Acton rocket skates. Robert is eventually strapped into the Acton skates, and as he straps his helmet on (safety first), Martin explains how they work. Martin has Robert set up in the “beginner mode,” which limits the speed and will give some guidance to help balance Robert out.
Robert eventually takes off on his own, skating forward on the rocket skates. Robert skates out into the hallway that entrants walk through to enter the Shark Tank, and both Kevin and Mark scream for Robert not to run into the fish tanks along the side of the wall. As Robert skates out, Ashton jokingly shuts the doors and mentions, “One less Shark.” All of the Sharks are having a good time, and Robert skates back in with ease. He is still wobbly but manages to make it back in, eventually needing to catch himself on the table in front of Mark. Of course, Kevin slyly comments, “prime time national bozo.”

However, all of the Sharks question how the Acton rocket skates steer. Robert, with Martin agreeing, explains that they are quite difficult to maneuver and balance. Kevin points out that there is definitely a learning curve, and poses the question of how long it would take for your average customer to get comfortable with the skates to the point where they would no longer need guidance. Most of the customers of the Acton rocket skates are college students and younger, so most of them are able to get on and start riding right away. Robert then asks about the price of each Acton model, and they begin at $499, and also go up to prices of $599 and $699.

The difference between Acton rocket skates are the range and battery strength of the shoes, meaning that they will go for a 6, 8, or 10 mile range. Each pair of shoes costs around 40% to make each pair of shoes, Martin says – the range varies depending on the model. Mark estimates $200 for the $499 version, which Martin says is somewhere appropriate in the range, but Kevin asks why Martin is being so variable about it. Martin says that a lot of people watch the show, but Mark feels that he is pitching to capital venturists and should be as open as possible. 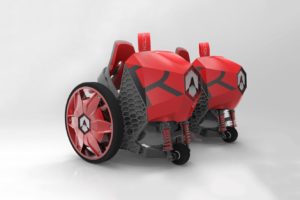 Robert then explains his feelings, and explains that he feels like they are a toy. However, a lot of social media exposure is helping to improve the popularity of the Acton skates, and students are posting videos and pictures of themselves using the skates to get to class or to catch a train or anything that might require some traveling. Mark agrees, since when he attended Indiana University, he used to roller skate to class, and the Action rocket skates would have definitely been “bad-ass.”

Lori asks if Martin has any patents for the Acton skates, and Martin says that the skates have 2 utility patents, 4 design patents, and 16 pending patents to increase the coverage of the product. But with a $30 million valuation, Robert is curious about how there can be a $100 million dollar industry. Robet asks for sales, and Martin explains that in their first year of sales, they performed $750,000 in sales, and in their first full year of sales (the second year of existence), they sold more than $2 million worth of Acton skates. This next year, after talking with big-box retailers like Target, they are hoping to secure deals worth $500,000 with numerous retailers.
While there are a less-expensive version of the skates available as Martin explains, Kevin is curious about what Martin thinks he will net this year in sales. Martin estimates a $10 million year of sales, which blows all the Sharks away. Kevin and Lori ask if the Action rocket skates have the money, let alone the means of production, to create such a huge order. Martin explains that they are in talks with new factories, and the factories they are currently working with, are able to do hundreds of units each day. Lori asks how many thousands per month, but Martin does not have the numbers off-hand.

Ashton then asks about the financial fundraising round, and Martin explains that they had a $2 million seed round and closed their first “trench” of the A round, which was $2.5 million. The value of the $2.5 million was around $20 to $25 million valuation. Martin seems to be stressing a little, as all the numbers and formulas and ratios are a little too much to keep track of – if you ever appear on Shark Tank, bring a portfolio with you. Robert asks how much money Acton has to burn right now, and where their break-even point lies for the year. Martin says that the break-even point just happened within the past 2 weeks of sales, and they are burning about $100,000 a month to produce Action rocket skates. 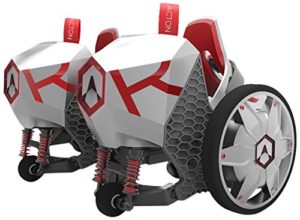 Robert loves the technology and is impressed with the fundraising that Martin has gotten after 2 rounds. However, the company is still growing and at only a 3.5% investment, Robert would barely be seeing any large returns unless Martin manages to hit it out of the bark. Martin and Acton still need a lot of expertise and work to be done along the path of the business, so unfortunately, Robert is out of the deal. There is just too much work for too little of a return.
Kevin is also in the same place as Robert, since $1 million for 3.5% does not make him really feel wonderful. Ashton, however, interrupts, and says he wants to make things simple; there is some real interest in the Acton rocket skates, but there is no price that gets Ashton excited for the investment of the product. While Ashton agrees with a shift in the direction that Martin is going into, he ultimately is just not interested – when the two men skated in on the Acton skates, he did not immediately jump out of his seat and feel the need to try them. Ashton steps out of the deal, as well.

Lori loves the product as well, but what bothers her also is that Martin seems to be giving off an air that he knew he was going to get a deal, or that his other seeding rounds meant that Martin did not have to try his hardest to get a deal. In Lori’s gut, Martin and his company are not dying for a deal in the Shark Tank, so she is skeptical of an investment in the company. Martin reassures her that he is there to make a deal, but Lori is out of the deal.

Mark speaks next, thinking that personal transportation will eventually explode. But whenever Mark asked about the numbers, Martin was all over the map with the presentation, and it was not concise enough for Mark to feel confident to invest. So, Mark is out of the deal as well, leaving Kevin as the only Shark.

Kevin explains that he looks at the risk and return of the deal. The deal is high risk, and the only way he can get a tangible return is if Martin hits it out of the park with his product. Martin ultimately asked for too much money for the company, but since Kevin wants to humor the offer for a potential boom in the future, he offers a $1 million investment in exchange for 15% of the company.

Unfortunately, Martin and his company, Acton, do not find an investment in the Shark Tank.

Acton Now in 2018- The After Shark Tank Update

Since the appearance on Shark Tank, Martin and Acton have remained dedicated to revolutionizing personal transportation. Now, Acton is widely available to consumers but at a steep price of $400 for the very basic pair of shoes. Acton RocketSkates vendor from a range of $400 up to $700, and the more increased expenditure, the farther your RocketSkates will go.

Currently, the Acton RocketSkates are available from some big box retailers like Wal-Mart and Target, but also Amazon. The reviews are iffy, as the Amazon Acton “R10” model has a 4 star rating across 5 customer reviews. These are the most expensive model at $679, but will get you up to a 10 mile travel distance on a singular charge. They also travel at a speed of up to 10 miles per hour and feature a 50 watt motor. Not bad for a product that is starting its grassroots in revolutionizing personal transportation – while I do not believe that you should purchase Acton skates yet, nor are they ready for the mass market, check back in 5 years and you might find a surprising method of getting to work or school.