As Hearthstone settles into a quiet lull, the best, and most powerful, decks are becoming more clear. Now that the entirety of the most recent adventure, Karazhan, has been released, we have quite a period of time until the next expansion is released – the next expansion, while yet to be announced, is quite a ways away. We can expect the next expansion to release any time from December to February.

In addition to the settling period, where no new cards will be introduced for around 3 months, Blizzard has recently released a ‘Welcome Pack’ – the Welcome Pack can only be purchased once on each Battle.Net account for the price of $4.99 (likely varies in other currencies), but will contain 10 classic packs and 1 assured Legendary card. Unfortunately, the Legendary card will be class-specific and not a neutral card that can be used in every deck; this is most likely to give players a starting point and to attach them to a class to start their time in Hearthstone.

After much research, I have found what I think are the best five decks to use over the next few months in Hearthstone. These are the mid-range Shaman, the dragon Warrior (again!), the Aggro Shaman (also again!), the tempo mage and the Malygos Druid. Read on more to find out some tips and tricks for each of the decks, and how you can make your own rise to legendary status on the ranked Hearthstone bracket.

The Malygos Druid consists of two techniques that can be used to destroy your opponent; the deck is based around the Malygos legendary card, which gives your spells a shocking 5 additional damage. Druids already have a plethora of spells in their arsenals, which typically involve damaging the entire board (with cards like Swipe or Astral Storm), or single target spells that deliver far more damage (such as Starfall). The Malygos Druid depends on both combination and tempo tactics, meaning that you will be able to play cards in rapid succession and either set the pace of the game or answer your opponent’s cards with your own to eventually take control of the board.
The Malygos Druid features a wide cost of cards, starting with the no-cost Innervate and Moonfire cards, and going all the way up to include the Malygos and Yogg-Saron, Hope’s End cards. Essentially, the goal of the Malygos Druid is to stock their deck with a means to summon out a number of minions and also cast a huge number of spells to trigger Yogg-Saron, Hope’s End special effect (casting random spells to random targets). Minions like Emperor Thaurissan, the new Moonglade Portal from One Night in Karazhan, and Gadgetzan Auctioneer are featured, while spells like Nourish, Swipe, and Wrath are critical in order to retain some card drawing power and also damage enemies on the board.

The Malygos Druid deck costs a lost of arcane dust to craft, so this is a deck that new players will not be able to obtain for some time – the Aggro Shaman or Tempo Mage are more affordable, accessible decks. 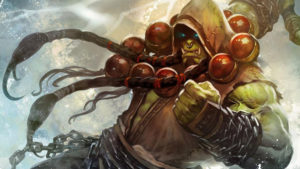 Shamans have finally branched out from their safe, aggressive style; it seems that there have been numerous additions to the midrange line of cards for all classes, thanks to the release of One Night in Karazhan. The midrange Shaman deck, indeed, seeks to take control of the game with a variety of cards that will all come into play around the 4th or 5th turn. To achieve this, the midrange Shaman employs a variety of minions and spells, most of which are cheap-cost minions that are empowered by a backup of higher cost minions that pose a more immediate threat.

The midrange Shaman deck includes traditional staples like the Mana Tide Totem, Hex, Feral Spirit and Bloodmage Thalnos cards, all of which are important keystones in getting early control of the game. The midrange Shaman uses a variety of tactics that are exclusive to the Shaman, such as throwing out massive amounts of totems to both preserve the cards in their hand and to make their 6-cost Thing from Below minion cost less and less mana with each successful passing turn. When it comes time to end the game, the midrange Shaman does not use any weapons (other than the Rockbiter Weapon card) but seeks to eliminate the opponent’s minions and use their own to win the game through hero damage.

The midrange Shaman is not an expensive deck, and can be obtained with no time at all; cards like Tunnel Trogg and Maelstrom Portal do require the purchase of the additional adventure packs, but can be substituted out for less efficient cards. The midrange Shaman is a good deck for players who are newer to the game and want to have the good grace of being able to throw out a large number of cards without waiting too long for those same cards to be effective.

The Mage class has finally made it back into the spotlight! Thanks to the addition of some spells and spell-based minions to the Mage repertoire, Mages are finally able to return to their “sniper” role of being able to throw out large amounts of damage at targets, all without forcing themselves to take any damage. The Mage class had dropped off in popularity and effectiveness recently due to the prioritization of early game cards, as the Mage requires a lot of card draw and timing in order to be effective.

Just like the Malygos Druid and the dragon Warrior, the tempo Mage is most efficient when they play their cards as an answer to the opponent’s cards. The tempo Mage can buff their spells to do some extreme damage, and this is what the deck is based around – either playing cards that will allow for additional card drawing, or playing cards that will increase your spell damage (occasionally playing a card that does both). New additions that have made the Mage more relevant include cards like the Babbling Book from One Night in Karazhan, and the Firelands Portal card which allows for you to deal some nasty damage and summon a minion at the same time. Of course, you will also find some Legendary goodies in most decks that include cards like Yogg-Saron, Hope’s End, Archmage Antonidas, and Emperor Thaurissan. Remember, when the next expansion comes out, Blackrock Mountain will be removed from the game and Emperor Thaurissan will no longer be playable in the Standard format!

The tempo Mage is a somewhat expensive deck, requiring a decent amount of legendaries to reach its 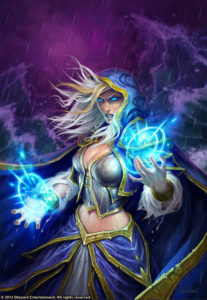 maximum potential. Most of the legendaries in the deck revolve around the use of spells, as Archmage Antonidas will add a Fireball spell to your hand whenever you cast a spell, and Yogg-Saron, Hope’s End is just an interesting gamble that could possibly win you the game, or at least leave you with a powerful threat on the board that must be removed immediately. This deck is more for advanced players, as you must be able to wait patiently in anticipation of using your spells and limited monsters at the most critical moment.

Aggro shamans are still present, and still more annoying to deal with than ever; however, with the introduction of some interesting new play styles into the metagame of Hearthstone, aggro Shamans no longer serve as big of a threat as they did upon the release of Whispers of the Old Gods due to the introduction of more threatening midrange cards for each class in the game.

Maelstrom Portal is still a core component of the aggro Shaman deck, which would require that you own the One Night in Karazhan adventure. Overload is also still a featured mechanic of the aggro Shaman, although it seems now that the overload mechanic has been swapped out in favor of retaining mana for the next turn; if you did not know, overload cards allow you to play a more powerful card at the cost of losing some of your mana next turn (but it returns the turn after).

The aggro Shaman staples have not changed much; cards like Doomhammer (combined with Rockbiter Weapon) and even the 4-cost Flamewrathed Faceless are intended to serve as your major damage and end the game, either immediately through sheer opponent damage or to pose a super threat to your opponent and draw their attention. Other cards like Tuskarr Totemic and Sir Finley Mrrlgton, along with the new Maelstrom portal and Feral Spirit cards, are there to allow you to take control of the board as early as the 2nd or 3rd turn.

Aggro Shamans are somewhat of a cheap deck, and possibly one of the best ways to score a number of wins if you are new to Hearthstone. Aggro Shamans do not require an intense amount of arcane dust to begin, and are reliant upon only a few high-cost cards in order to really dish out some damage.

The dragon Warrior utilizes not only the might of their powerful, harsh-swinging weapons, but also the synergy of their dragon-type cards. A good dragon Warrior will attempt to set the tempo and pace of the game by simply responding to their opponent’s cards; typically, you do not want to be the one to deal the first amount of damage to the opponent’s champion, but rather do a larger amount of damage upon receiving some damage.

As an example, Alexstraza’s Champion allow for the warrior to take immediate control of the board through their mechanics – it transforms from a simple 2 attack/3 health into a 3 attack/3 health, inclusive with Charge. This, of course, requires that you possess a Dragon-type card prior to playing it, which will end up costing you in the long run because of the lack of card draw. The dragon Warrior decklist has remained mostly the same from its time prior to the release of One Night in Karazhan; most of the “good cards” for the dragon Warrior archetype had been released in the earlier wings of the adventure.

The dragon Warrior, staying true to its name, depends upon Dragon-type cards including powerful legendary cards like Deathwing and Onyxia, while Warrior legendaries, such as Malkorok  and Grommash Hellscream, serve to allow the warrior to play more aggressively after a certain point in the game. The dragon Warrior deck can be customized thanks to the large variety of dragon-type cards within the Hearthstone game; you could choose to focus on spell damage instead of preferring weapons, for example. The deck potential is nearly limitless, thanks to the presence of Dragon-type cards that typically dominate the middle portion of the game.