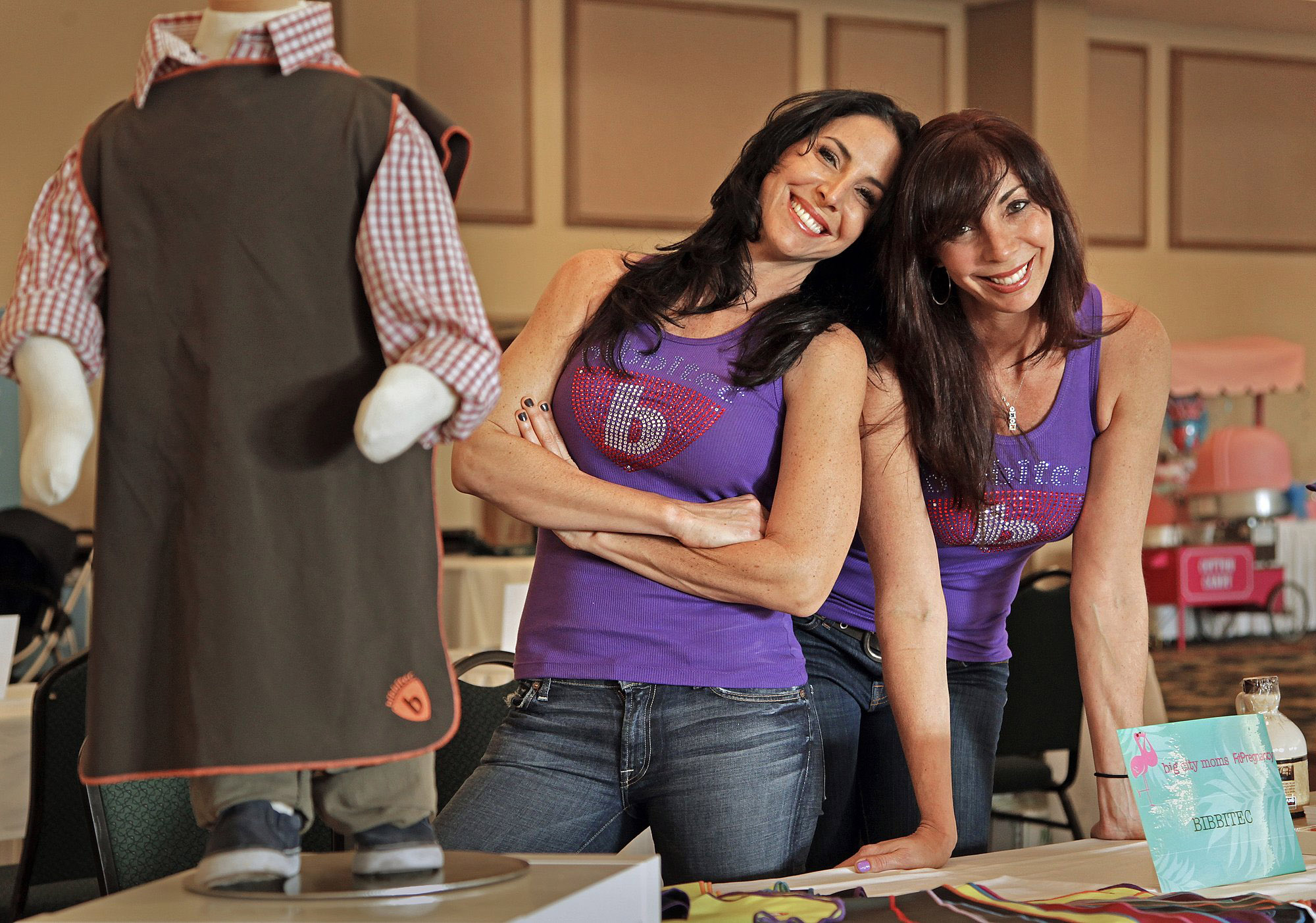 According to their website, Susie Taylor got the idea for Bibbitec while dealing with two messy children on an airplane. She tells a very different, messier story on Shark Tank. Let’s take a look. 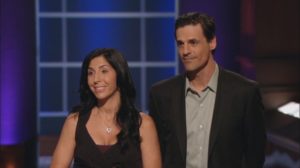 Susie and Steve Taylor walked out onto the stage and introduced themselves to the Sharks. Susie stated that they were seeking $40,000 in exchange for 14% equity in their company, Bibbitec. She told that Sharks that the couple had two messy little boys. Steve said that they would spend money on bibs that did not quite do the job. He grasped his wife’s hands and said: “Susie if they don’t work, please don’t buy them.” This little play act had the Sharks giggling in appreciation. Susie stated that she did stop buying them, and decided to solve the problem herself. They invented the Bibbitec bib. Steve held one out for the Sharks to examine. It was much longer than regular bibs.

Susie demonstrated a different bib on a doll they had on stage. She slipped it over the head and pulled the arms through the arm holes. It entirely covered the baby doll. Susie said that the bib was constructed with non-toxic, American made fabric. It was also stain-proof, doesn’t retain an odor. Steve put something that looked like mustard on it, and Susie wiped it off easily. Susie asked the Sharks if they would like to see the samples. Barbara asked to see the nasty one. The pair handed them out, while Robert asked if it wasn’t going to stain. Susie informed him that the wetness from the wipe would air dry. The bibs were made from the same wicking fabric as fitness clothing.

Kevin asked why it cost $15 to make it. Susie said that the material was premium, and super expensive. Kevin stated that they couldn’t make money selling bibs at a high price. He indicated that it was much cheaper to buy a bunch of bibs, and throw them out when they get dirty. Steve said that he was completely wrong. He stated that the bib would last upwards of 4 years. Susie said that parents are spending $400 a year on bibs, but Robert said that here was no way that could be true. Susie stated that mothers buy and then throw away a ton of bibs per year. Robert asked how many they’ve sold in total. Steve said that they’d sold 2,000 bibs since they began four years ago. Robert asked how much they’ve sold in the last 12 months. Steve let him know that they sold $17,000 in sales for the year. The Sharks all looked like they were a combination of horrified and disappointed.

Kevin let them know that the market was not lacking for bibs and that they don’t sell well online. He asked them why they were not in a retail space. Susie looked upset. She said “they,” told her retail was a hard sell because they have to educate consumers about the bib to sell it. She has to explain to people that it works for the bib to sell. She said that big box retailers use normal bibs to get moms to the store to buy other things. Kevin told her that the bib was too expensive for most consumers. Susie still disagreed. She stated that people have bought the bibs for $48 in the online boutiques. Kevin said that it was insane for people to pay that price. Susie said that she feels like retail is obnoxious, whatever that means.

Kevin told her that Bibbitec was more like a hobby than a business. Susie said, very flippantly, that she was all ears for any tips. Kevin repeated that the bib was too expensive, but Susie reiterated that they sold the bibs easily at various price points. She claimed that getting the consumer educated about the product is the issue. Susie stated that she doesn’t have the business experience she needs for Bibbitec to be successful. That’s what she came on Shark Tank for.

Robert said that they had a great product, but he still had a challenge for them. He wanted to know if they have attempted to license the product out to a larger company that could incur the more significant costs of trying to manufacture the bibs, Susie said that she tried approaching the big box stores, and they told her to use Chinese manufacturing facilities. They wanted to sell it for $10 less than Susie’s retail price. Susie did not like the toxins that were in Chinese-made materials. She stated that it was a moral issue for her. Susie said that she wants to make American made products that are good for kids.

Kevin stated that America could make products, but the cost is prohibitive.He said that she is hurting children whose parents can’t afford the bibs. Susie said that the margins are large, but the Sharks begged to differ. They told her that Bibbitec’s margins are terrible. Robert repeated the price that she paid, and the price that they sell it for, and asked how it is a right margin. Susie and Steve paused and looked at each other. Steve said that whenever they were about to get in front of mothers with Bibbitec bibs, the product flies off the shelf. Susie said the minimal success they have enjoyed is due to parents no longer wanting to buy cheap, easily breakable Chinese made things.

Kevin asked if they were making any money doing it, and Steve admitted that they were not. He said that they had invested about $75,000 over the course of four years. Kevin asked if they’ve made any return on their investment, and Steve said no again. He said that value of their company is how much parents love the product. Kevin ignored that and asked if how long he was going to continue losing money every month trying to promote this business.

Steve said that he has a cap on the amount of money he is willing to put in, in the case that they don’t get an investor. Barbara asked what the figure was – how much more they are willing to put in of their personal money. Susie said that they cannot afford to sink any more money into Bibbitec. Kevin asked her if it was time to take the bib behind the barn and shoot it. She looked at him angrily. She said it was not.

Daymond asked Susie if they would be able to get their costs down even if they continued manufacturing it in America. Susie said that she would have to put in a large order, but it is possible. Kevin cut in, saying that they would have to get the cost down to $2 for it to be worth it. Daymond ignored him, asking Susie and Steve what the magic retail price would be to sell at to get them to fly off the shelves. Steve said that the smaller one could go for $19.99, and the larger, full body one for $24.99. Daymond said that the cheaper one needed to be manufactured at $5 a piece for the margins to be worth it. Kevin said that it would never happen, but Steve stated that it was possible, they would just have to use a different material.

Robert stated that the material was not the issue. He wanted to know how they proposed to sell thousands and thousands of Bibbitecc bibs. He told them that they were not doing an excellent job of explaining how they planned to accomplish that. Kevin reiterated that it was just too expensive. Robert extended the question to Susie- was she not selling thousands of bibs because the overhead was too expensive? Susie said that the fundamental reason why she was not selling thousands is that her kids come before her business. Robert asked her if she was seriously saying that she wasn’t selling enough because she was a mother. Susie exploded, coming up with more excuses while her husband tried to calm her.

Daymond asked why she was getting emotional. She told Daymond that she was a stay-at-home mom, and she is trying to raise her kids right. Steve was the one that wanted to run the business. They were getting into fights over finances. And they were going over the bills, and discovering that they were paying a bunch of month for bibs, and she gets the passion because she is trying to help moms with similar problems. Kevin said he was heartbroken. He believed that she was trying to say that the Sharks were not real investors.He said that money was a binary, you either make or you lose it – and they were losing it. Susie tried to say that they didn’t have the Sharks connections which would allow they to make money.

Kevin and the couple argued back and forth for a bit until Mark cut in. He said he liked the product and did not have an issue with the price point. He stated that Susie was the wrong person to run the business, and she needs to hire a college kid to manage it for her. He went out. Barbara said that she agreed with Mark’s idea, but also stated that they have an available sales force in moms. She stated that they were right that retail is not the best method. Barbara also went out.

Kevin said that the other two gave Bibbitec encouragement when it can’t be saved. He went out. Daymond stated that education is a standard problem in most businesses, but he could not help them with it. He went out. Robert was the last one. He said that he heard a lot of complex strategies on it, He wanted them to follow the money, and have a clear plan. He didn’t see it in them. He went out. The Bibbitec team thanked the Sharks and walked offstage.

Bibbitec Now in 2018 – The After Shark Tank Update 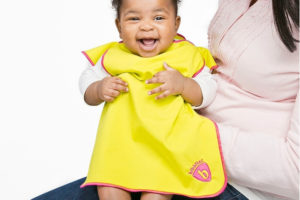 Bibbitec is still selling their high-tech bibs on their website, as well as on Amazon, and in a couple of stores in Florida, California, and the UK. Their Facebook is fairly active, and hints of new projects in the works.