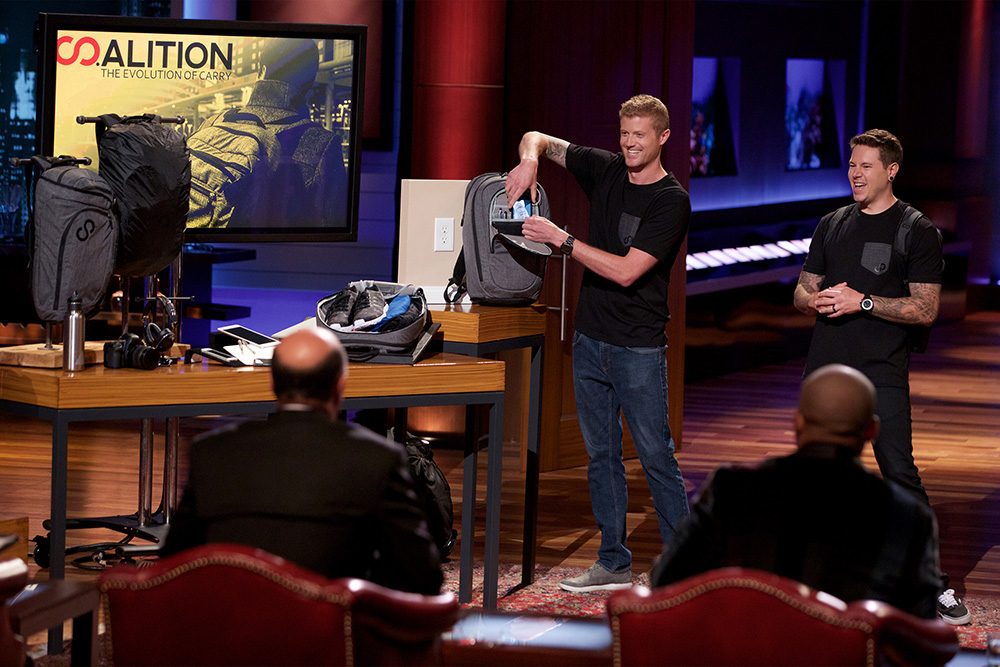 Before appearing on Shark Tank, the gentlemen behind CO.ALITION had another backpack business geared towards people who love the outdoors and hiking. They made a considerable amount of money with that business. When Jeff and Casey had the idea for their technology-infused bags, they decided to make an entirely separate business. They launched a Kickstarter campaign, and they raised $20,085 of their $10,000 goal. Would they be as successful on the Tank? Let’s find out! 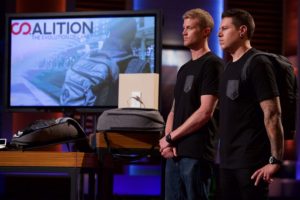 Jeff Popp and Casey Lorenzen walked into the Tank. Both were wearing black tee-shirts and gray backpacks. They greeted the Sharks and introduced themselves. Casey said that they were the founders of CO.ALITION, a Colorado-based smart bag company. The pair was seeking a $200,000 investment in exchange for 20% equity in their business. Jeff said that we are living in a time when people are constantly on the move, and addicted to their technology. When your smartphone dies, it’s like a little apocalypse. You end up losing your entire connection to the outside world. Casey said that CO.ALITION backpacks offer a solution to that problem.

Jeff said that the pair integrated smart technology into their stylish backpacks. He claimed that it stops technology not only from battery death but also from running out of memory. I’d be interested to see if they have an option for my iPhone since the memory capacity is not adjustable on Apple products. Jeff went on to say that you can just plug the phone into the backpack to charge it up. While he was narrating, he plugged his phone into the bag, and the screen lit up, revealing the phone background to be a picture of Mr. Wonderful’s face. Daymond groaned in disgust.

When charging your CO.ALITION backpack, you just plug it right into the wall. Jeff told the Sharks to keep their pants on; there was more. Kevin was the only one who seemed amused. Casey told the Sharks that the pack contained a wireless hard drive, which is what set the bag apart. The pair claimed that it was like a personal cloud service, storing music, movies, and documents. It apparently keeps files accessible at all times, but also off of personal devices. Casey told the Sharks not to be intimidated by them, and their prison tattoos and boyish good looks, they were on the Tank to work hard. Jeff asked them who was going to help them advance the “evolution of carry.”

Jeff handed out CO.ALITION bags for the Sharks to test out. Robert plugged his phone into the bag, seemed impressed, and asked them when they’d gotten started. Jeff said that they started this particular idea seven months ago, but they’ve been in the bag business for six years. Casey stated that they currently have an outdoor technical brand of bag on the market called MHM. Daymond asked if that company still existed, and the pair confirmed that it did. Robert wondered how big their old business is, and Jeff stated that last year’s sales were $450,000. Casey said that they’d done $1.2 million with that brand. Jeff stated that they named their current venture something entirely different because it required totally different branding. Robert asked if they were asking for investments in CO.ALITION, and Jeff confirmed that they set it up that way.

Kevin, of course, asked if they had a patent, and Jeff stated that they didn’t. Kevin said that anyone could put a charger and a drive in a bag. Mark agreed, say that the technology was in place to do just that, Daymond stated that there are plenty of solar-powered bags so that you don’t have to charge the bag at night. Kevin accused them of coming onto the Tank with nothing. Jeff said that the charging system and the drive are computerized. Robert asked what was unique about that, and Jeff informed him that the computer chip in the system allows the consumer just to plug the bag into the wall instead of removing all of the component parts and plugging them in separately.

Robert asked if they’d actually sold any of the bags, and Jeff answered that they sold 500 units in about seven months. Lori asked what they were charging for the bag. The bag cost varies wildly between $180 and $600. Kevin enquired about the profit margin, and Jeff said that the profit ranges from 50% to 70% depending on the retail price. Robert wanted to know what the total revenue was on the 500 bags. Jeff said that the total income is about $100,000. Daymond looked unimpressed. Robert asked where people find them. Jeff said that they sold the bags primarily online since they did not have the funds for traditional marketing. Robert asked them what the vision was for the business. Casey stated that it was an overall view. They had the idea for the bag while on a business trip in Japan, where they noticed that every person had a mobile device and a bag.

Robert said he understood that part. He said that people are too lazy to go out and buy all of that stuff on their own. Robert told them that he loves the convenience factor, but he wants to know how they plan to scale the company up. He asked them for their go-to-market plan. Casey said that he didn’t see the product as being good for traditional retail. It required demonstration for customers to really get it. Robert asked if they were going to pump all of the money into going online. Casey said they want to optimize the website, and set themselves apart. They were facing tough competition and a niche market.

Daymond said that all of the Sharks could take the bags to a distributor, have them copy the bags, and hire five college kids at $50k a year to market the crap out of it. He asked the pair why they were valuing CO.ALITION at a million dollars. Jeff said that they were pioneering a market in new wearable technology. Mark said that he didn’t understand why they were diverting attention away from their already successful business. He told them it scared him. He wanted them to grind at the first company to get it up to $5 million. He asked them what was stopping them. Casey said it was because they saw a wider audience for the smart backpack. Mark went out, saying that he didn’t like that it was an entirely different company.

Robert said that it was not a separate company, but instead a feature to the existing one. Casey tried to say that the bag was entirely different, but Robert was having none of it. He also went out. Kevin addressed the pair, asking them if they’d like to take the time to adjust their approach. He told them they knew it was stupid to cut the company in half, and not use the sales from the other products in their favor. Jeff looked over at Casey, as Kevin asked if they had another idea that they would like to present before all of the Sharks went out, and they had to leave.

Jeff said that they would be open for combining them, and asked Kevin what his offer is for that change. Daymond stated that he wanted to see them give an offer instead. Jeff said that they wanted $300,000 for 30% in exchange for both brands being on the table. The three remaining Sharks considered, and then Lori spoke up. She said that she was not convinced that people would actually pay that much money for the bags with the accessories when they could hack it together themselves. She went out.

Jess thanked her and said that he really felt like they had a lot to offer to the industry. Kevin called them exciting. They have $500,000 in sales, which proveS something, but they don’t have anything proprietary. Kevin wished them luck and went out. Jeff thanked them for their time. Daymond said he understood that they aren’t going to create anything new, but they can expand on what already exists. His problem was that they had all the components to be successful, but they just were not there yet. Daymond said that he was tempted, and Casey told him that they were really looking for a strategic partner to take them to the next level. Daymond stated again that he was tempted, but his gut was telling him no. The pair thanked him for his time and left the Tank.

CO.ALITION Now in 2018 – The After Shark Tank Update 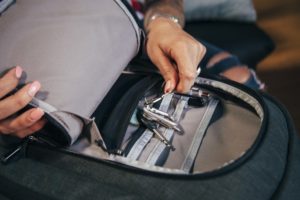 You can purchase the bags at the CO.ALITION website, as well as on Amazon and at the retail store REI. Their Facebook and other followings are sparse. They seem to have a stylish and well-designed backpack, however, so only time will tell if they will be successful.