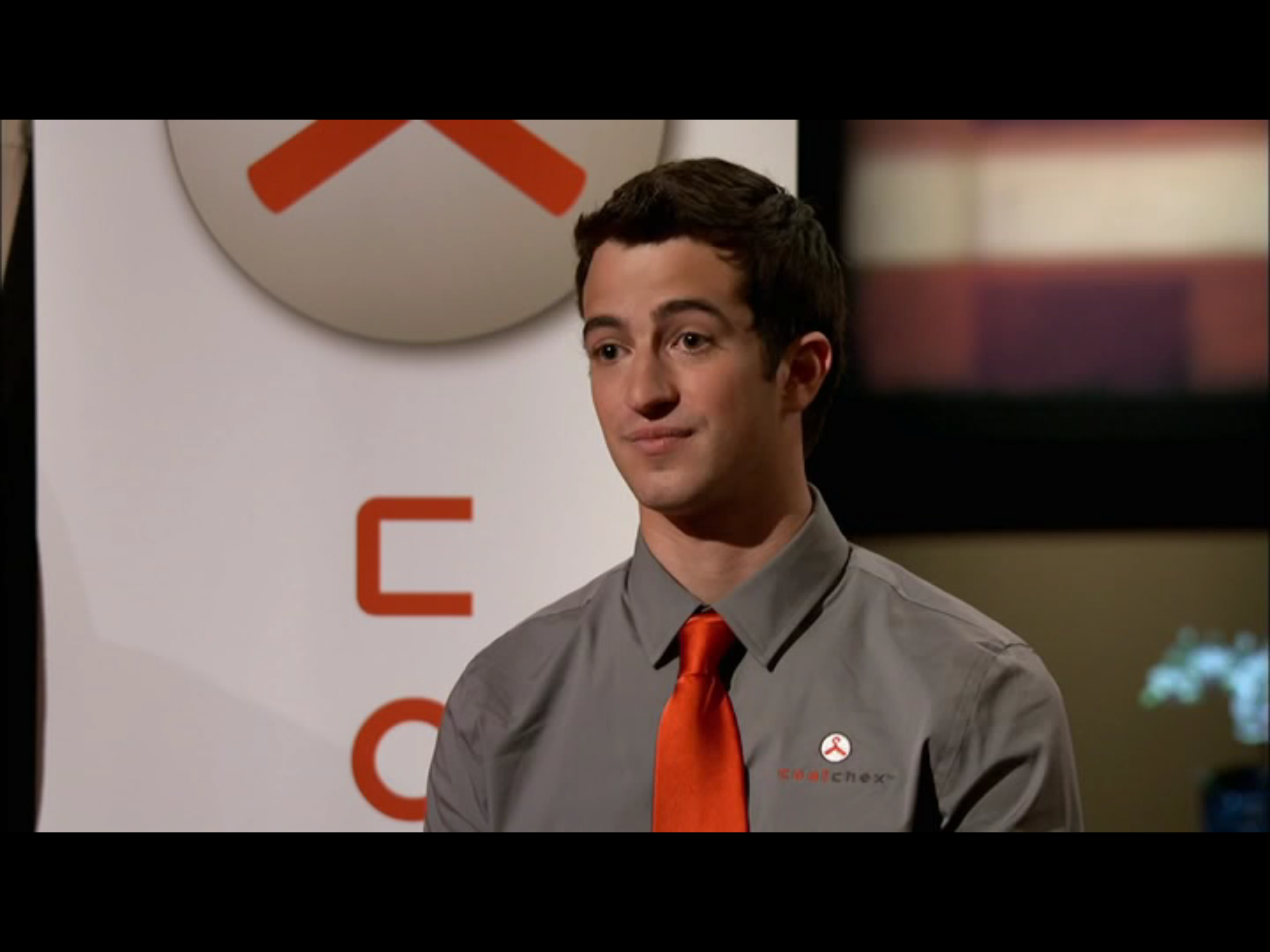 Derek Pacque founded Coatchex in 2011 after he lost an expensive jacket at the local bar in his college town of Bloomington, Indiana. He attended Indiana University, where Mark Cuban is an alumni. Frequently, those local bars and clubs did not even offer standard coat checks, leaving patrons with the option of either freezing on the way in, or the potential to have your jacket lost or stolen. Derek began Hoosier Coat Check LLC at a couple of local bars. It was a ticketed system, but it filled a need that most restaurants in the area did not.

That evolved into the current Coatchex system after Derek decided to streamline the process and make it faster and more convenient. His college professor mentored him, and also invested in the company. Derek applied and got on to Shark Tank without having ever operated his new system. Was this a wise choice? Or was Derek about to be eaten alive by the Sharks? 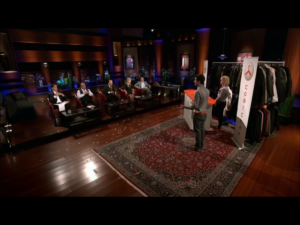 Derek walked into the tank looking confident. He started off by introducing himself, and then immediately appealing to Mark Cuban with a college chant. He said that he was asking for $200,000 in exchange for a ten percent equity stake in the company. Behind him was a sample kiosk for Coatchex with an attractive attendant. Derek outlined the dilemma facing most bar and nightclub patrons – be warm and then have to deal with dragging their coat around all night, or shiiiiiver and be cold while standing in line.

Derek was really hamming it up. He actually put a leash on the fur coat he was holding, to show how one could be “shackled” to their coat all night. He started dancing in an attempt to show how hard it was to “show your moves on the dance floor” while dragging around a heavy jacket. Derek explained that he once had his coat stolen from the club, and he awkwardly winked and pointed at Barbara. She looked amused.

Derek described how he asked the manager of the bar why they did not have a coat check in place. The manager apparently told him it was too much of a hassle. Derek went on to ask if he could start his own, and the manager agreed. At 21, he was running 2 coat checks at local college bars. But Derek was not satisfied with the way things were always done. The tickets were a hassle, and not very safe. Derek had his ideas about how things should be run. He then threw up coat check tickets up in the air, and they rained down on the stage like confetti.

Derek then introduced his new CoatChex system. He started to explain how the system works. There was a tablet on the kiosk. The customer inputs their name, and that triggers the camera to take a photo of them. The customer then confirms that the picture is of them. Then system also photographs the jacket or coat and accepts payment. Derek stated that “It’s time to turn an inconvenience into an opportunity.” He asked the Sharks to cut him a check for his innovative new system.

Mark Cuban looked amused, while Daymond went straight to business. He asked if Derek had any sales. For the first time, Derek looked unsure of himself. He stammered out a no and tripped over his words. He said that the kiosk was his first prototype. Robert then asked what the actual business was – the service or the technology. Derek stated that his intention was to start franchising. His business model would be the kiosk, the computer, and the design.

Kevin then asked when the plan was to start selling a bunch of units of the business. Derek said the idea was to start with his local area first. Mark looked shocked. He wanted to clarify that Derek had not actually sold anything yet, and Derek confirmed that he had not. Mark went on to ask if he was going to sell to area developers who were going to sell then to franchisees. Derek nodded again. Mark then screamed that it was a horrible idea, and just kept saying it as Derek looked on in horror.

Mark clarified, saying that his primary concern was that it had not been tested yet. He was very worried that the technology was going to “screw up.” Kevin asked Derek why he wouldn’t go to a local steakhouse and let them use it for free for 90 days to see if the system actually works. Derek said that he wants to, but it was warm at the time, and no one is wearing coats. This is essentially admitting that it is a seasonal business, and the Sharks are pretty harsh on seasonal businesses. They all had a good laugh at Derek’s expense.

Daymond then asked Derek how many of the coats he stole himself. Derek looked super uncomfortable. Daymond went on to explain that Derek’s two million dollar valuation was a little much for not having any sales. Daymond said that Derek was a thief. Derek begged him for a chance to explain why that was not the case. He stated that he had a patent on a particular type of “bailment service,” which is when you hand over a belonging to a person, and they keep it for a certain period of time, like a valet service.

Kevin asked if he had a patent on all possible types of bailment service, and Derek confirmed that he did. He pushed that They would not just be buying into Coatchex, but also other businesses down the line. Mark reminded him that he is still just in the development stage, and asked him how much he would be charging his franchisees. Derek said that it would be $150,000 for the whole thing.

Robert asked how much it would be to check a coat, and how he was planning on compensating the hosting business. Derek answer that it depending on the event the venue was hosting, but typically $2-5. He would split revenue with the hosting venue, at a 15/85 split. Daymond asked if there were any other competitors out there, and Derek said that there were none. The Sharks looked contemplative.

Daymond disagreed that there were no other competitors. He told Derek that there were similar products out there, and called him uneducated. Daymond did say that he thought Derek had a lot of drive, but it was not enough to keep him in. He folded.

Kevin then voiced his concerns about it being a seasonal business. He told Derek that he had no immediate plan for distribution, which is a large challenge that he would be facing. Kevin was the next to go out, claiming that his hate for seasonal businesses was the cause. Derek looked sad, and a little worried. It seems he had a good reason for that. Barbara was the next to go out, stating that it appeared to add time and complexity to the coat check process. Derek tried to explain that eventually, it would all be an iPhone app that uses QR codes, but it was too late.

Kevin took the time to recap the situation. He stated that Derek should ignore all of the Sharks who went out, and focus on trying to get money out of the two remaining. Derek mentioned that he was just out of college, and the reason why he was on the show in the first place was to get help scaling the business. He mentioned his partner, the professor who also helped him to finance the prototype.

Robert gave Derek excellent advice. He said that he could start by licensing the company out to local universities, and then gradually get multiyear contracts with other venues. Daymond then sarcastically pointed out that the business was worth two million dollars. Robert said he needed help visualizing how the company was worth two million. Derek shook his head, and there were a good five seconds of awkward silence. He said he was willing to negotiate.

Mark stated that he liked the business, but he needed to know more about Derek himself. He then restated that Derek’s current business plan was horrible, and wanted to know if he would make the difficult decisions necessary to change it. Derek said he was and was interested in hearing from people who had been there before. Robert said he loved the idea, but not for the current valuation. He asked Derek to make him another offer. Derek attempted to divert, but Daymond curtailed him. Derek offered a 15% stake, and Robert went out without letting him amend.

Mark said that he still liked it, and could help Derek build a track record. Mark stated that he would need to help him out with knowledge and experience in exchange for 33% of the business. Daymond called him crazy. Derek went to call his business partner and looked excited. His business partner advised him to pass, and that is just what Derek did to the shock of all the Sharks. He said that he still needs to develop it, and prove himself.

CoatChex Now in 2018 – The After Shark Tank Update 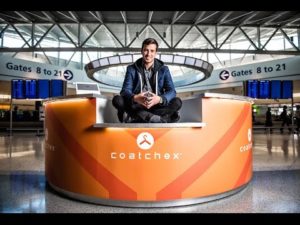 So how did CoatChex fare without Mark Cuban, and his money and advice? It seems that just the exposure from the show alone has catapulted the company’s earnings and sales. It also provided some exciting opportunities. They were chosen by Life in Color, which seems to be a mashup of the Color Run and a music festival. CoatChex provided 7,000 stations for the participants to wash up in and hold their extra clothes, and perhaps even their coats. This was a great help to the festival-goers, who were sweaty and covered in paint. CoatChex also were contracted for the 2013 New York Fashion week.
Derek Pacque completely changed his business model for the better since appearing on Shark Tank. Instead of the customers paying for their services, CoatChex stations are sponsored by brands. This is a win-win situation. CoatChex still gets paid, the service is free to the customers, and the brands get useful marketing information. It seems like CoatChex is going places.