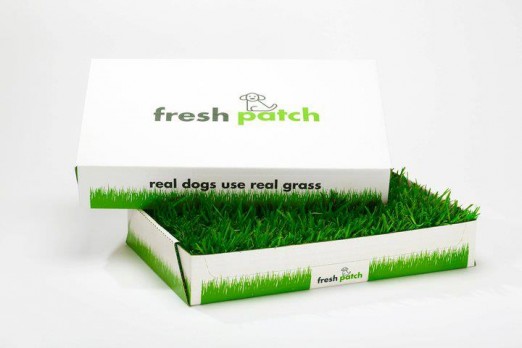 Stepping into the Shark Tank is Andrew Feld from Davenport, Florida. Andrew is the founder of Fresh Patch, and he is seeking an investment of $150,000 in exchange for 10% in his company. Fresh Patch is a real grass delivery service for the millions of pets who have everything in their life, EXCEPT for a fresh backyard. Four years ago, Andrew, his wife, and his dog Chloe moved from their house with a backyard into a condo. For a dog, there is nothing worse than not having your own backyard, so Andrew took it upon himself to build a “mini-backyard” on their balcony so Chloe could have some yardage. While Andrew’s wife thought he was crazy, his dog did not.

Andrew stepped into the Shark Tank with a person inside a stuffed animal suit reminiscent of a dog, at which point they high-five since the dog is supposed to emulate Chloe. Chloe absolutely loved the grassy area, but the only problem was that the grass would eventually die off and maintaining it would become a chore. This is where the idea for Fresh Patch was born; Fresh Patch is the first real grass delivery service of its kind. Fresh Patch ships boxes of fresh, hydroponically-grown grass towards their subscribers all across the country. There is no cleaning and no mess – when the new Fresh Patch arrives at your door, simply unbox it and throw the old patch away. Customers use Fresh Patch with all different kinds of pets – it’s easy, convenient, and animals love the feel of fresh grass.

Barbara seems a little shocked, but then asks if she could bring the Fresh Patch box inside. How long would it be until she found an odor, though? However, fresh grass is a plant, and plants naturally break down odors through various complicated chemical processes. Lori takes the time to point out that there are numerous brands of “piddle pads,” which small dogs are trained to go on. However, nobody likes piddle pads since they smell, they can be confusing to use, and if they are not changed in a decent amount of time, they can leak through to the carpet. Grass, however, is instinctive to dogs. 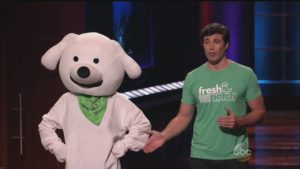 Robert points out that Andrew must have a recurring revenue model, which Andrew explains that Fresh Patch has a subscription service. The subscription model is the most popular model, which the most common order being delivered at least once every week. A Fresh Patch delivery costs $25. Mark asks about the subscriber count, which (“on-the-book,” meaning official, Andrew says) is 549. Kevin asks about the attrition rate, the rate of which people try the product and then never come back. Unfortunately, Andrew reveals that about 25% of people who try Fresh Patch actually stick with it.

Barbara points out that 2 out of 3 customers do not order again, which is a concerning number for all of the Sharks – even Robert agrees. Mark refocuses, asking how much a unit of Fresh Patch costs to produce. Each Fresh Patch (there are two variants, the Fresh Patch and the Fresh Patch XL) costs about $5 to produce, including labor. For shipping, the west coast of the United States is about $7 to $8, and when shipping across the United States towards the east coast, the shipping can jump up towards prices of $15. The shipping cost is fully absorbed by Andrew, which prompts Mark to point out that his margins for profit are being killed since Andrew is absorbing the price for shipping.

Mark then asks who is responsible for the technology of Fresh Patch, which Andrew says is all him. Andrew explains, he actually started Fresh Patch the day after he found out his wife was pregnant. The pregnancy was an inspiration, so Andrew built the website himself, started the technology himself, filed for the patent and copyright himself, and has pretty much done everything himself. Robert then steps in, pointing out that he is worried about the 75% attrition rate – Fresh Patch seems more like a novelty, but the sales prove that Fresh Patch has some traction. Robert admits he is curious to see how his dog would take to Fresh Patch, and Andrew offers a free one, but unfortunately, Robert is the first Shark out of the deal. 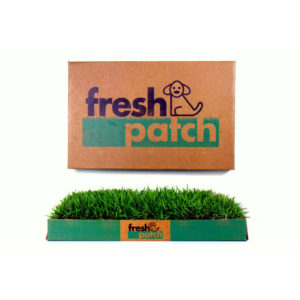 Lori asks where Fresh Patch is grown, and Andrew explains that each Fresh patch is hydroponically grown in California. Hydroponically means that a plant or natural element is grown, but without soil – the grass can be grown in sand, gravel, or a few other synthetic elements. However, Andrew explains further – with two-thirds of the money that he receives from the Shark Tank, he will begin to invest in an east coast distribution center to cut down shipping costs.

Kevin then drops a reality bomb on Andrew – there is nothing proprietary about what he is doing. However, Andrew has a patent for a portable and disposable living patch of grass. The main competition is pee pads and synthetic grass, but there is also a company that is infringing on the patent. Kevin asks if Andrew is going to “go after them,” and Andrew confirms he is suing that company – Kevin says he is more interested that there is somebody he can actually sue. He finds the idea interesting because if Andrew is successful in his lawsuit, he can recover some of the competition’s customers as part of the settlement.
All of the Sharks take a moment to think, but Kevin breaks the silence and is the first to make an offer. Kevin offers $150,000 in exchange for a 33.3% stake in the company, but Andrew says that he knows that his company is worth so much more than that. Kevin asks for flexibility, but Andrew must stay firm – there is no room for leniency. However, Barb steps in and says that it is too early for counter-offers as only one Shark has made an offer and another Shark has exited, leaving three Sharks still in the game.

Barbara then makes an offer of $150,000 in exchange for 20%, but with one contingency. That contingency is Andrew must begin to gear his operation to move towards pet shops and retail, which surprises Kevin. Barbara, however, feels that the Fresh Patch would be great in pet stores since she believes she knows the pet industry inside and out. She bought a business named “Ryan’s Barkery,” and had to begin to build bridges into the stores but she found that she has great relationships with those people. She finds the Fresh Patch an incredible idea and thinks that the pet stores will be quick to reorder. 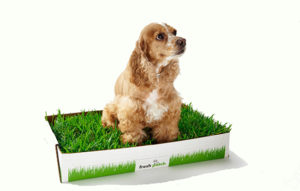 This prompts Kevin to drop his offer down to $150,000 in exchange for 20%, making his offer the same as Barb, but he does not include the contingency that Fresh Patch must go into retail. Since Fresh patch is perishable, this can cause a liability, and Kevin is not into tying himself into a liability. Barbara, however, says that each person living in the city feels so bad since they might not have the time to take their dog to the park or to give them the proper exercise, so bringing home a nice patch of grass would feel so good for the owner. The Fresh Patch is more of a feel-good product than it is a productive product for helping the dog.

Lori thinks she knows the huge value of Fresh Patch, but Andrew is just at the tip of the iceberg since he is preparing to move into the east coast. People typically do not like to walk their dogs in the winter, and the Fresh Patch is very competitively priced. Lori thinks for a moment, giving the floor to Mark. Mark agrees with Barbara in that the Fresh Patch is a great retail product, but he also sees it as a tech product which is more interesting to him. Mark then proposes to partner with Barbara, who already said yes, saying that Mark has skills of technology while Barbara has skills of retail, particularly in New York City. Mark proposes that the two of them will take over the accounting and website and accelerate the growth, while Andrew focuses on scaling the operation.

Mark and Barbara offer $150,000 in exchange for 20%, but demand an immediate answer – this is also still contingent on entering retail. Andrew asks to barter on equity, but the Sharks remain silent, and Andrew acquiesces and agrees to partner with Barb and Mark.

Fresh Patch Now in 2018- The After Shark Tank Update

One of the first results upon searching for Fresh Patch is a news story to the locale of Davenport, Florida, which is where Andrew is from. Andrew mentions, “”We’ve already shipped a thousand today… It’s been crazy. I didn’t get much sleep last night because the phone has just been going off. I mean it’s going off right now.” It seems Andrew found some immediate success right off the bat, and as a dog person myself, I absolutely love this – get them pooches some grass to do their business on.

Fresh Patch has a new, redesigned website (nice job Mark), and have redesigned how their customer will interact with the product – there is now a regular Fresh Patch, the Fresh Patch XL, and the Fresh Patch mini – these are for pets less than 25 pounds, pets over 25 pounds, and pets under 10 pounds, respectively. The regular Fresh Patch now runs for $29, and a subscriber can save 5% off by placing a subscription order. However, the most concrete thing about the success of Fresh Patch are the insane reviews. The website boasts an incredibly strong rating of 5 stars across more than 250 reviews, while the Amazon website for Fresh Patch has 4 star reviews across more than 1,300 reviews. Fresh Patch is available on Amazon for $19 with $9 shipping, but this is mostly bulk and excess grass.