Tina Sugandh is a reality TV star best known for her role on the show Newlyweds: The First Year. On the show, fans knew Sugandh as prissy and hard to please, though talented and fun-loving. She appeared in the first season of Newlyweds, and many viewers enjoyed following her and her husband Tarz Ludwigsen’s first year of marriage. However, after her time on Newlyweds, Tina Sugandh didn’t remain active in the reality TV world for very long. Nonetheless, fans expect to see more of her in the future. What has Sugandh been up to since Newlyweds: The First Year, and what is she doing now in 2018? 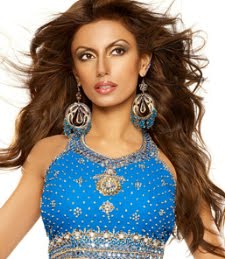 Tina Sugandh was born in Mumbai, India. Though her family immigrated to the United States when she was just 5 months old, Tina never lost her Indian heritage.

Both of Tina’s parents were performers. Her mother, Geeta Sugandh, was a well-known singer in India, while her father, Kanaiya Sugandh, is a performer, singer, comedian, and professor. Tina’s parents encouraged her and her sister Seema to hone their talents as performers. When the two sisters were growing up, the family performed at events around the country, and eventually gained a small following.

Tina and Seema were both talented, versatile singers. The family performed in English, Hindi, Urdu, Punjabi, Gujrati, and Sindhi, and they were well-loved for their beautiful sound.

When Tina was 15 years old, she was discovered by Sean Harris. Harris was a screenwriter and creative mentor who recognized Tina’s talent immediately. He eventually convinced her to pursue music professionally, and she began working on a demo CD.

As she was furthering her music career, Tina was also pursuing an education. While doing photoshoots with Harris and weekend performances with her family, Sugandh studied Biology at Rutgers University. All of Tina’s hard work paid off. Besides graduating from Rutgers on the Dean’s List, she was also signed by Rebellion Entertainment Company, where she spent time creating and performing her own music.

Tina Sugandh’s background as a performer made her a great candidate to perform on reality TV. Her talent and lively personality kept viewers interested as the show followed her first year of marriage to her husband, Tarz.

Newlyweds is a show that takes the success of bridal shows one step further. The reality show documents new couples’ first years of marriage, highlighting their challenges and the struggles they overcome together.

Since Newlyweds, it seems as though Tina and Tarz have been able to make a little more time for each other – because they now have two children! Their son, Tarz David, was born in 2013. He has even gotten a little bit of fame himself; the toddler had a modeling gig with H&M when he was just one year old!

The couple welcomed their daughter, Song, in 2015. Song was named in honor of Tina’s mother, Geeta, who passed away in 2008 from breast cancer. Tina’s mother was a singer, and she says that “Geeta” translates to “song,” so she thought it would be a good way to honor her mother.