Omega Jym is a fish oil product from Jym that promises the highest quality fish oil in the market.  Jym is a company founded by Dr. Jim Stoppani who’s a well-known personality in the fitness industry.  Stoppani earned a doctorate in exercise physiology from the University of Connecticut and has written thousands of articles around exercise, nutrition, and health.  Let’s see how Omega Jym stacks up against the competition and dive into the science behind fish oil supplements.

What does it do?

As your diet gets closer to the optimal equal balance of omega-3/6 fatty acids, signaling molecules called eicosanoids are more responsive in the body and get released more readily during periods of stress.  Much of the effects of fish oil supplementation are within the cardiovascular system: lower blood pressure & decreased triglycerides, but the cascading effects of these eicosanoids also result in decreased inflammation and increased cognitive function.  The effects of fish oil supplementation span a wide-range of benefits and we’ll cover these in future articles, just know that hitting the proper balance of omega-3 to omega-6 fatty acids in your diet is truly what’s important.  Eating fatty fish may not always be possible or convenient for you, and depending on the fish, may not necessarily be the healthiest option (e.g. due to mercury content).  Supplementation is a viable route for swinging the ratio back closer to 1:1.

Based on the ingredients listed on the bottle, you’re getting a health 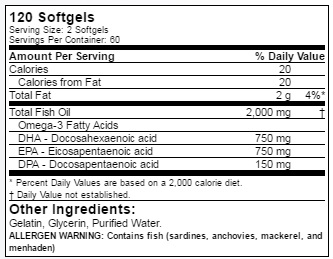 y dose of 1,650 mg of omega-3 fatty acids per serving (2 capsules) of Omega Jym.  When purchasing a fish oil or omega-3 supplement, always pay attention to the total amount of EPA and DHA per serving/capsule as there are other fatty acids that are present in fish oil that aren’t necessarily omega-3’s.  In the case of Omega Jym, docasapentaenoic acid (DPA) is also included and is a classified omega-3.  Keep in mind DPA isn’t as widely studied as EPA and DHA, the latter of which is most beneficial to the human body according to literature.

The amount your body requires is specific to your current nutrition, but 2 grams of EPA and DHA each is the recommended starting point.  It’ll take two servings of Omega Jym per day to hit that number and the time of day you take it doesn’t necessarily matter.  Adding omega-3’s into your system is a relatively long process and you may not experience any significant changes until after a month of supplementation.  Personally, I notice an increase of joint pain when I fail to take my fish oil and/or abstain from fish for a long period of time but your specific condition is completely dependent on what you’re taking it for.  Overall, the omega-3 content as well as the dose of both EPA and DHA are more than adequate for a serving of Omega Jym, but just understand that two servings per day is probably needed.

One 60 serving bottle of Omega Jym typically costs around $20.  This puts it at close to average for products of similar quality.  Keep in mind that each bottle will likely only last you a month as you’ll need multiple servings to hit your omega-3 target. 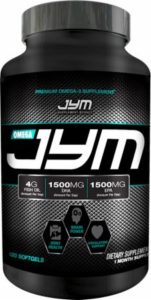 Omega Jym from Jim Stoppani’s company, Jym, is a high quality omega-3 supplement which can be added into your current supplement routine to help you reach the optimal balance of omega-3 to omega-6 fatty acids in your diet.  It’s formulated with a total dose of 1,650 mg of omega-3’s per serving and comes at a reasonable price.  The benefits of a well-balanced fatty acid intake has the potential to have very beneficial effects throughout the body and fish oil supplementation is almost necessary for people who don’t eat very much in their diet.  Give this product a try, but again keep in mind to not expect any changes until at least a month of supplementation.