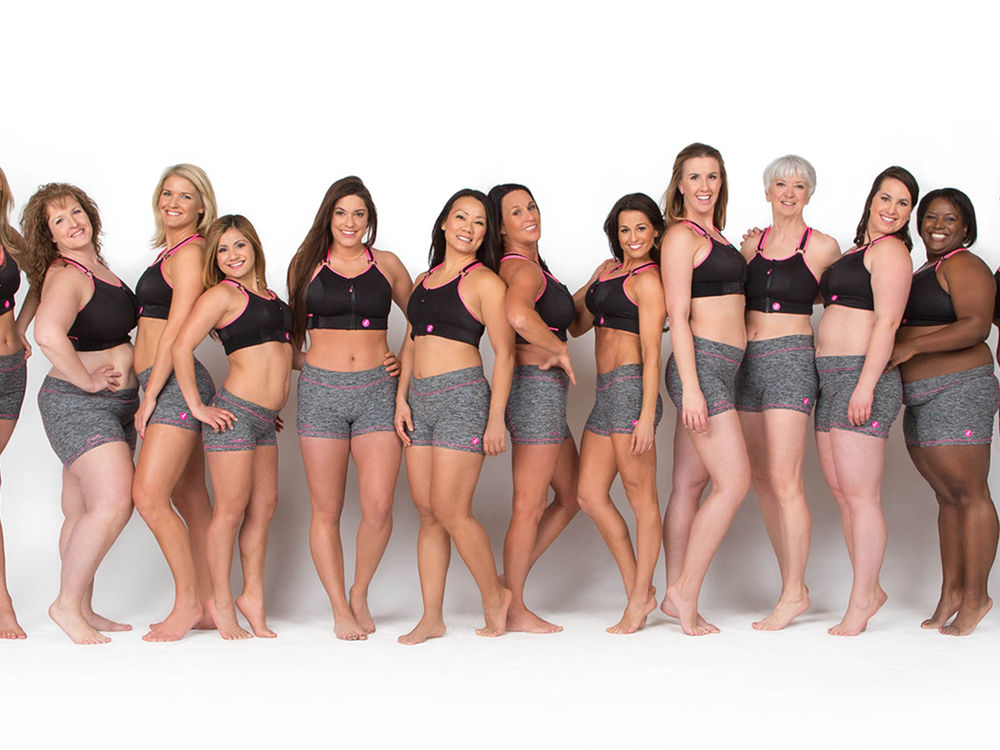 Sara Moylin has always been an active woman, and she wanted to keep it that way, even though she was pregnant with her first child. The available sports bras were just not cutting it for Sara, and she was not the type to just sit idly by and not exercise. She made the first prototype of SHEFIT, a fully adjustable sports bra. She took her idea to Kickstarter, and managed to reach her goal, and even go a bit beyond it. Would the Sharks be as receptive? Let’s take a look. 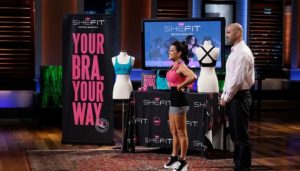 Sara and Bob Moylin walked out onto the stage and into the Shark Tank. Sara, wearing a tight black tank top that said SHEFIT in pink lettering, told the Sharks that they were excited to be there, and introduced herself. Bob went next, in his matching pink button down. Sara said that she was the creator and co-founder of SHEFIT, pointing to the display of sports bras on the stage. Bob stated that they were seeking $250,000 in exchange for a 20% equity stake in the company. Sara said that SHEFIT is the ultimate sports bra, and that phrase is also in their branding. She continued, stating that they were the first and only customizable sports bra with that was fully adjustable. Sara took one from the display and started to put it on over her clothes, telling the Sharks that it worked like a jacket. Instead of just pulling it over her head, she put it on like a coat and zipped up the front. Sara stated that the bra featured a 2-inch bust span that would not roll or bunch up during a workout. The back part lets you adjust the bra by 10 inches or more along the ribs. The straps are Velcro, allowing for vertical lift. Sara claimed that you would not have to worry about unibody, because while the bra provides compression, it also allows for encapsulation.

Sara asked the Sharks, who would help them be the next big thing in business. Kevin jokingly told her that she was “So not in shape.” The apparently fit Sara laughed, and said that she tries. Mark asked if she was always on like this, referring perhaps to the energy that she exuded seemingly from her pores. Bob agreed that she was. Sara handed out samples, give Lori a pink one. Robert said that he would be using his at the gym tonight. She gave a black one to Kevin, claiming that it would be the perfect fir for him. As he laughed, Robert said that he does need a bra. Robert asked Lori if it felt a little thick for a sports bra, and Lori stated that she was just about to ask about that. She said the SHEFIT seemed pretty padded and thick and asked if there was a reason behind it.

Sara stated that there was, and then launched into an origin story. She told the Sharks that she created the SHEFIT out of her need for a well-fitting sports bra. She is a fitness instructor with four kids. She lamented about trying to stay fit while pregnant with her first daughter. She said that it’s tough to find a sports bra that fits when you are big busted. Lori clarified, saying that when you wear a typical stretch nylon sports bra, it just smashes you. Sara confirmed, saying that the design of SHEFIT prevents that from occurring. The male Sharks all asked what a uni-boob is, and Sara laughingly explained that it was the smashed one boob feeling you get from typical sports bras. A regular compression bra will just smash everything together

Lori told Sara that the bra doesn’t look bulky on her, but it feels so padded that she finds that hard to reconcile. Daymond asked if she had the pads in hers, and Sara said that she doesn’t. She specified that SHEFIT is your bra to customized however makes you feel comfortable. Robert asked her if the thickness made it uncomfortable. Sara told him that it was a good question, but she denied that it was uncomfortable. She said that it felt light on, and stated that it was made from wicking fabrics, which helps takes care of the sweat from working out.

Daymond asked if any other bras zip from the front, and Lori said that there were a million of them. Sara confirmed that but stated that they have a patent on the adjustability. Robert asked which part, and Sara told him both the one on the shoulders, as well as the bust-band component. Lori asked if the patent was on using both of those things together, and Sara nodded, saying that it was a very strong patent like that. She stated that no one else in the industry has that type of technology. Kevin asked if she meant the multiple adjustment technology, and Sara said yes.

Mark interrupted, saying that the proof is in her sales and the market. Bob spoke up, and told the Sharks that they had done $220,000 in the last year and a half, $50,000 in the last 45 days. Of that $50,000, half was from the SHEFIT e-commerce store, the other from 19 different retailers. Sara asked if she could continue, and Mark laughed and made an engine chugging sound. Kevin wondered aloud who does the talking in the family. Lori cut in, saying that maybe there is a reason she does all the talking. She wanted Sara to clarify what each of the roles is for the husband and wife team. Sara told her that she handles the entire creative and sales part of the business, while Bob handles the financial and logistical aspects. Bob cut in, saying that he also works with the overseas vendors.

Robert asked them if they work on the business full-time. Sara stated that they work on the business at night, and they each have sales jobs by day. Bob indicated that he works in industrial chemicals, while Sara sells medical devices. Kevin said that they also have four kids, and Lori said that it’s clear that they both work out like crazy. Sara grinned and said that they have a lot of freedom due to their success at their regular sales jobs. Sara stated that she planned on walking away from her day job in 3 months or less.

Lori asked them who they needed $250,000 to make the business work if they were successful enough to walk away from day jobs. Bob said that the majority of the money would go towards funding their inventory. He wanted to shorten the lead time and get more reliable suppliers. Bob said that they need to enhance the front end of their website. Sara said the pair are having difficulty finding a web team to get them the right e-commerce site. She said that she wanted to back up, and look at the numbers again. She told the Sharks that she had managed to get the sales that SHEFIT achieved entirely through word of mouth, trough channels like Facebook ads and trade shows.

Daymond asked what it cost to make. Bob pointed at the bra that Daymond held, and said that it costs $14.50 to make, and they sell it for $58.99. Robert stated that they had a great margin, but Lori, the only bra-wearer among the Sharks, seemed hesitant about the price. Sara said that they were paying $40 a bra to make them in LA, but their supplier could not keep up with the demand. She said that it was a 3 billion dollar industry, and they wanted to get into the active-wear space. She stated that she wanted to go outside of the industry and create their “pie.” Robert was having none of it. He stated that they were not creating their pie, they were going after the sports bra industry. She might be doing it better, but she’s not going outside of what is already established. Sara said that other companies were advertising their clothing as adjustable, but it was really limited. SHEFIT offered full customization.

Mark told them they could argue all day long, but the proof was in the sales. Bob agreed, repeating their impressive sales figures in the short amount of time. He told the Sharks that out of 200 women leaving reviews, their product had received 4.5 stars. Robert said that. He admired the ability to have four children, and also be in great shape. But he was concerned that they didn’t have time to build the brand that dreamed of. He went out. Sara said that she just needs to have some doors opened for her – she could sell the bras all day if she was in front of the right person. Kevin said that he believes that, and Mark was nodding along. Sara said that normally retailers have to stock about a ton of different sizes for bras, but the adjustability of SHEFIT cuts the SKU count down dramatically, as well as the amount of inventory they have to house. Kevin said that was kind of interesting.

Lori stated that she was thinking about other bras that she has seen in the market. She was concerned that another company that would come against their existing patent. She went out, saying that she wasn’t comfortable with that risk as an investor. Sara stated that she respects Lori decision and then appealed to Daymond. She stated that he must know how difficult it is to obtain a patent on clothing. He said that he did, and he appreciated their speed to market. Daymond continued, saying that he had an in with many influencers in that market. He told them that their valuation was high, and he wants to be a ⅓ partner in the company. He wanted the answer immediately.

Kevin said that they were being cheated, but they accepted the offer. Daymond attempted to shake Sara’s hand, and Sara told him that she was a hugger. As they hugged, Sara said that they’d wanted Daymond from the beginning. The two looked very excited as they walked out of the tank.

Shefit Now in 2018 – The After Shark Tank Update 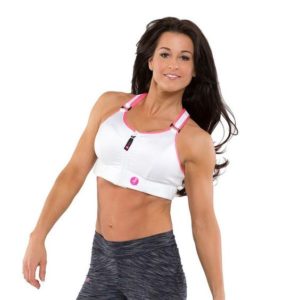 Since being funded by Daymond John, SHEFIT has been worn by several celebrities, including Olympian Val Smith. The company has been featured on the television program The Doctors, as well as the Today Show. Not much time has passed since the airing of the episode, but it seems like SHEFIT’s modest following is growing. You can purchase the adjustable sports bra on their website.