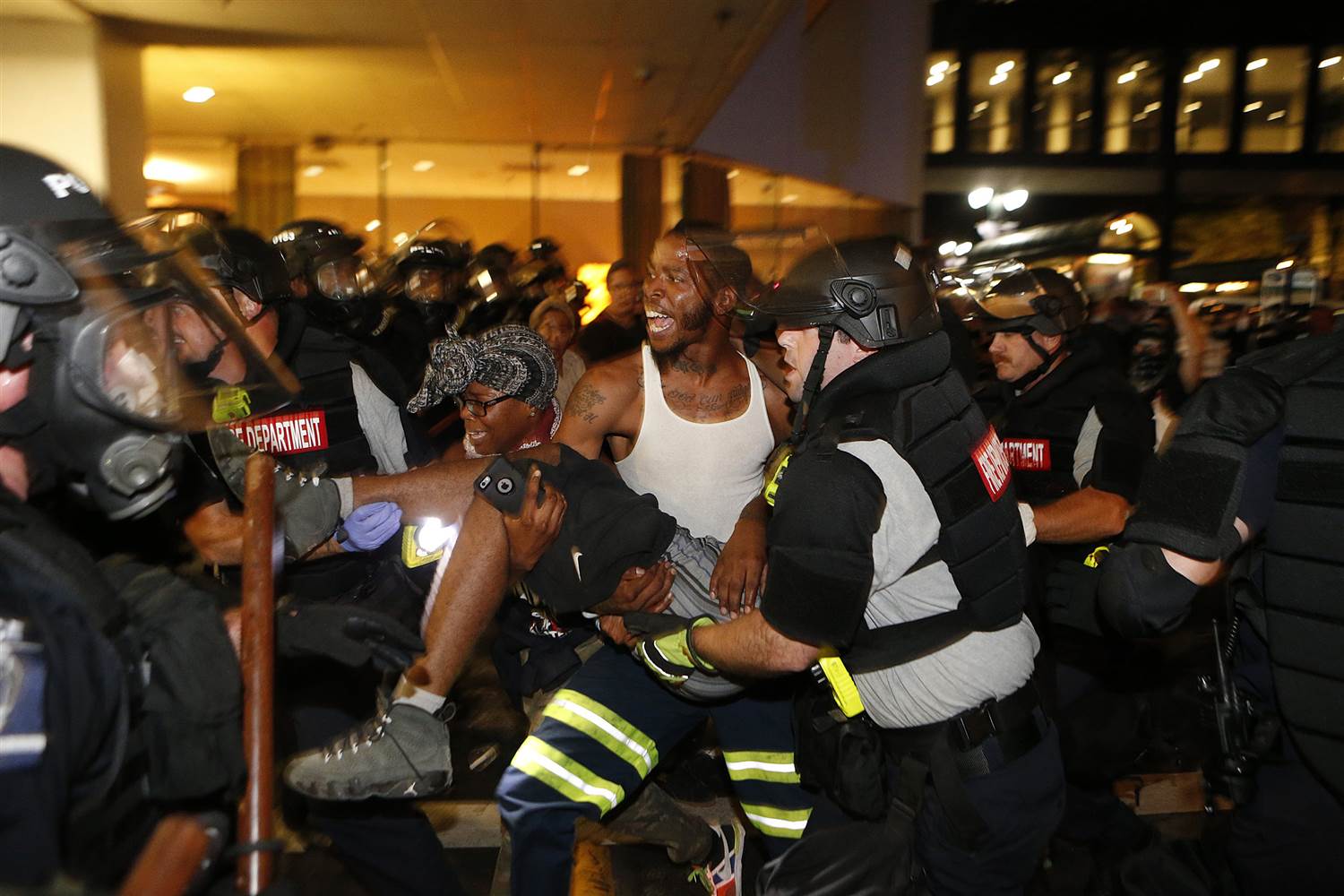 One person has been shot and wounded in Charlotte, North Carolina, during a protest on Wednesday which started after a black man was shot under contested circumstances. The unrest had been running in its second night in a row, officials said as they dispersed unruly protesters.

Amid the disturbances, North Carolina Governor Pat McCrory declared a state of emergency and has called upon the National Guard and state Highway Patrol to help police restore order in the city.

Charlotte Police Chief Kerr Putney initially reported that a person shot in the protest had died, but city officials have clarified via Twitter that the individual had been sent to the hospital and remains on life support. They also claim that the gunshot was fired by a civilian rather than a police officer, adding that an officer is also being treated for injuries during Wednesday’s protests.

“We’re trying to disperse the crowd. We’ve been very patient, but now they’ve become very aggressive, throwing bottles and so forth, at my officers, so it’s time for us now to restore order”, Putney said to Fox News.

While circumstances remain uncertain, the unrest was sparked by the fatal shooting of 43-year-old Keith Scott, a black man who police say was armed with a handgun he refused to drop when ordered to. Family members and a witness to the shooting contest this claim, however, saying that he was simply holding a book.

Authorities have yet to release videos of the incident, though the city’s mayor said she will review the footage on Thursday.

McCrory said his call for assistance was a response to the Charlotte police chief’s request to have assistance in containing the unrest. “Any violence directed toward our citizens or police officers or destruction of property should not be tolerated”, he said in a statement.

What started off as a peaceful protest became violent after several hundred demonstrators marched through the city, briefly stopping at a black church, police headquarters, and an entertainment venue called EpiCentre.

The protestors were then confronted by a column of patrol cars and officers in front of the Omni Charlotte Hotel as they approached downtown Charlotte’s central intersection, where they surrounded groups of police and their vehicles.

Police responded by firing a series of rubber bullets, pepper spray, tear gas, and flash-bang grenades to disperse the demonstrators, who began to hurl fireworks, debris, and bottles at them outside the hotel. The confrontation escalated after a line of helmeted riot police carrying shields advanced down a street, pushing back demonstrators who scurried for cover as officers began firing more tear gas.

Meanwhile, other protesters began damaging property, including the nearby Hyatt Hotel whose manager said two of their employees had been punched. The slogan ‘Black Lives Matter’ was spray-painted onto some of the windows, while others were smashed along with the hotel’s glass doors.

Demonstrators were also reported to have looted a convenience store after smashing its windows as well as a shop that sells athletic wear for fans of Charlotte’s National Basketball Team. Others set trash cans ablaze.

The lawlessness sparked anger in some of the protesters, with one woman shouting “stop – this is not what this is about” as young men hurled bottles onto the street. Scott’s wife Rakeyia issued a statement describing her family as “devastated” and appealed for calm, saying: “We have more questions than answers about Keith’s death”.

The incident is the latest in raising questions about racial bias in US law enforcement and has sparked debate over the approach to it. Black activists and pastors called for an economic boycott of the city, while the American Civil Liberties Union asked Police to release video footage highlighting the incident.