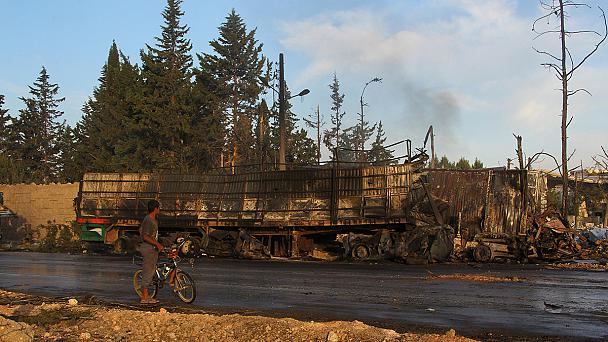 Last week, the UN was waiting to receive permission from the government to enter the most affected areas with their aid trucks. The ceasefire was doing well at the beginning, with reports of violence decreasing in areas. But that changed yesterday after an attack on the UN aid trucks that were near Aleppo.

The attack happened right after the end of the one week ceasefire and reports say at least 20 people lost their lives in the attack. 18 trucks were also destroyed in what witnesses say was an air strike. Syria and Russia have denied being part of the attack.

31 trucks were in the area when the attack happened and 18 were destroyed. The UN didn’t confirm what type of attack it was but aid workers say people were well aware of the location of the attacked aid trucks.

The ceasefire began last week and it seemed to be going well as there were reports of violence decreasing in many areas. The UN mentioned that it had not received permission to enter the areas with the aid trucks but was waiting for it to happen soon. The permission was given days later and according to one aid worker, they were almost celebrating because everything had been allowed. The aid trucks now needed to enter Aleppo and help the population.

Everything changed on Monday, when the trucks were attacked. According to a media activist who spoke to the BBC Arabic service, the first strike happened at 7:00 local time. He says the strike came from a helicopter, which dropped a number of barrel bombs.

The 31 trucks were carrying nearly 80,000 supplies, including books and medicines. The news shocked the world and aid workers, who had done everything to deliver the supplies to the most affected areas. According to a UN spokesman, the aid trucks had received permission to enter the areas.

12 of the 20 people that lost their lives in the attack were aid workers. The aid trucks had taken the supplies to the Red Crescent warehouse, where they were being unloaded when the attack happened. A lot of the supplies were destroyed, including the medicine needed for the population. Pictures of the devastating attack show trucks completely burned and boxes of supplies destroyed in the warehouse. The strike also damaged buildings nearby.