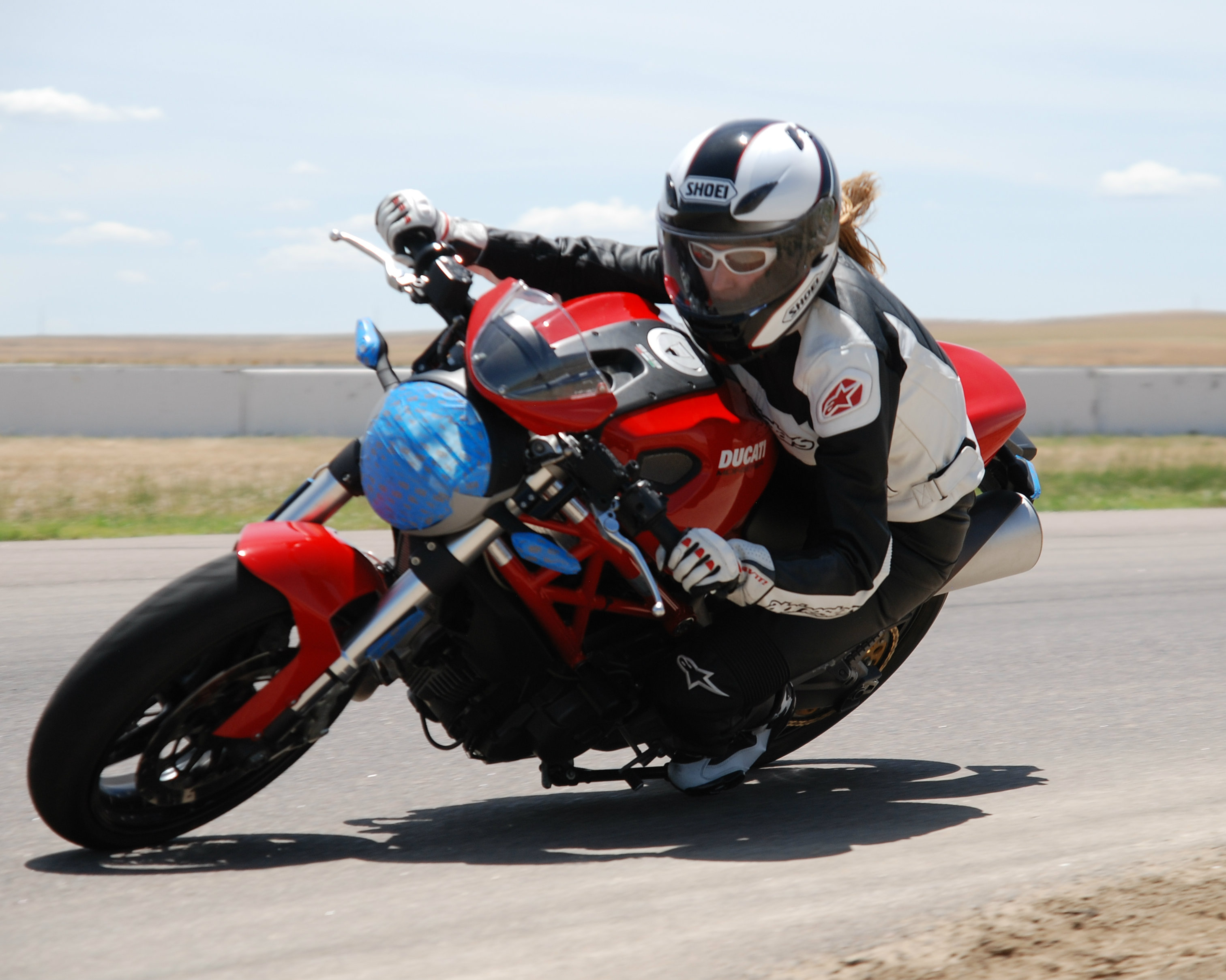 Before appearing on Shark Tank, the duo behind Track Days developed the story for the movie they planned to make but did not do much else regarding casting, script writing, or production. What made them think that this idea was not only viable, but it would attract the Sharks’ money? Well, James Lavitola is a stuntman in action movies such as the Fast and the Furious, and Brian Pitt is a producer for indie films. Would this combined experience wow the Sharks into giving them a deal? Let’s take a look. 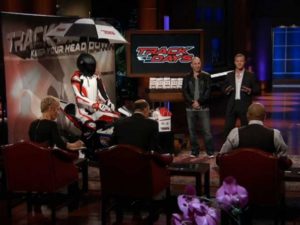 James Lavitola and Brian Pitt walked out into the Shark Tank, with an attractive brunette trailing behind them, holding a large beach umbrella. There was a giant movie poster on the stage, and the woman went up to it, holding the umbrella over the head of the mannequin in a racing outfit. On the poster were the names of all of the Sharks, under executive producer. The pair told the Sharks that they were seeking 5 million dollars (which got a “Whoa” from Kevin) in exchange for a 30% equity in their production. Brian explained that Track Days is a full-length action movie. Mark didn’t give him a chance to finish his statement – he went out immediately.

Brian tried to continue, stating that the movie was about the motorcycle world championship. Mark continued to repeat that he was out, and Robert laughed and sarcastically call him open minded. Brian continued, reiterate that it was about a motorcycle championship competition. He stated that they were combining one of the largest grossing movie genres with the second-most watched sport the world over. Kevin looked skeptical. Robert asked them what the sport was, and they told him professional motorcycle racing. Brian continued, saying that they put together a teaser trailer for the Sharks. The woman, who was dressed in a skimpy crop top and shorts set, passed out popcorn and candy to the Sharks. James also handed out a few swag bags with movie merch.

The trailer started out super dramatic. “One man must race to save his family.” I find it hard to believe that motorcycle racing is such a life or death situation. Kevin munched on the popcorn as he watched the text across the screen. There was vehicle sounds and music playing, as the screen went red. There were still no actors, or scenes, just text with terrible animation describing the action. When it was finished, Barbara and Robert asked if that was it. It was bare bones, even for a teaser trailer. Mark giggled to himself as he picked at the popcorn.

Kevin asked the pair if they wanted $5 million to make a movie. James said that he knows Kevin’s opinions on filmmaking, and how he thinks that it is a crapshoot. Daymond laughed silently in his chair. James stated that Brian is an expert in the field, and they would set it up so that the Sharks were the house, and the house always wins. Robert asked him to explain himself. James gestured to his partner, and Brian stepped up. Brian explained that the movie was a packaged product. He stammered as the Sharks all looked at him disbelievingly. He pressed on, saying that the film would have efficient distribution and foreign sales. Mark asked if it would be effective, or sufficient. Brian said both. He let them know that they would put a rewritten script together. Robert stared at him and asked if they had a script together. James said that they had the story, and Brian backed him up.

Brian stated that they started the script but ultimately decided to go a different route with it. Robert said that they get pitched different ideas all the time, and sometimes they do invest in movies. But they don’t invest in people who have not put any work into their project yet. He was concerned that they did not have the script, the actors, or a producer yet. James said that was an old school method of film-making, and that he would school them on how films are financed now. He repeated that the Sharks would not be at any risk of losing their money.

Brian said that what happens often is that people put a script together, get an actor, and go to a film financing company. He snuck in that he used to work for one such company. Robert stopped him, asking him if they had an actor. Brian said that they did not, and informed him that it was by design. Daymond stated that he knew that Mark was already out, but Brian said that they were going to reel him back in. Daymond stated that he’d heard that story. He has experience in movies – he was the executive producer of The Crow.

Kevin asked them if The Crow made any money, and Daymond told him that it was a horror movie regarding making his money back. Daymond went out. Robert laughed and said it was a record. It was the fastest two of the Sharks had ever gone out. Brian and James insisted that both Daymond and Mark would come back in. Brian said that he had a package in mind where they would not spend any money until they were shown foreign and domestic sales, deal, and product placement. He referred to the film industry as a “Chicken before the Egg” business. Brian said that they could make it happen if they have a great script and the money.

Barbara stated that they could make it happen if they have the right people. She wanted to know why she should have confidence in them, enough to give them $5 million. She asked them for their backgrounds. Brian said that he’s been in the business for 12 years, and a head of physical production for seven years for a semi-successful indie company that produced eight feature-length films that made it to the big screen. Barbara asked them how many they’ve made money on. Brian said that they grossed $200,000,000. He stated that he helped to produce Mr. Brooks, which was a halfway decent horror movie about a serial killer starring Dane Cook and Kevin Costner. The indie company also produced Waiting, which did fairly well.

Barbara asked James what his background was. He told her that he was on Broadway when he was younger. He said that he was a huge motorcycle fan, and wanted to see more movies made about them. Robert stated that he loves bike racing, but it was not a trait shared by many people in North America. He stated that NASCAR was much bigger than that kind of competition. James said that the draw for American audiences would be the actor. He told the Sharks that if the lead character were played by Ryan Gosling, his girlfriend would see it because of Ryan’s star power.

Robert reminded them that they said previously that the actor was not necessary, but now they were saying that he is. Brian repeated that the actor isn’t attached on purpose because it was too early to make a good pick. Robert wanted to know what would happen to his money if he invested since they do not have a script or an actor. James told him that he intends to put the investment into escrow. They would then “put the package together” by having list actors and a script for Track Days. Robert asked them if they wouldn’t be able to start the project until they know that the cash is sitting there. James told him that they wouldn’t launch the project until the investor is happy with the calculated risk that they take. It would be minimal, or they don’t do it at all.

Mark said that they were using the money as proof to studios and actors that they were for real. Barbara clarified that they would be using it as bait. James and Brian confirmed that it was true. Kevin stated that the movie business was the worst company he’d ever seen. James said that it had the potential to be extremely lucrative. Robert indicated that he would be unable to give them any money until he sees a script. He told Brian that he was doing it because he can’t get the money any other way. He asked Brian why he would take the risk.

James insisted that the project had a large, built-in audience, but Robert put him in his place. He told them that they had nothing to show them for their $5 million. The woman standing next to the post pulled Daymond and Mark’s names off of the Executive producer list for Track Days. Kevin was up next. He told them that it was a horrifically bad idea, and he forbid them to proceed. He went out, and his name was pulled from the board. Barbara told the pair that she wouldn’t know what to say to her teenage son, who she won’t let get a motorcycle if she funded the film. She stated that it wasn’t her kind of thing because they scare her. She went out. Robert was the only one left. They took the visor off of the mannequin, revealing a cut out of Robert’s face. James said that they knew that he would want to see on set for the movie, trying out the bikes. Robert stated that he could not handle the amount of risk that they were putting on him. He wanted to know more about it., because he couldn’t be involved with nothing. He didn’t give the guys a chance to finish, he just went out. His name was pulled from the board.

As James and Brian walked out, Mark commented that he saw the same deal in an email from Nigeria. The other Sharks laughed heartily.

Track Days Now in 2018 -The After Shark Tank Update 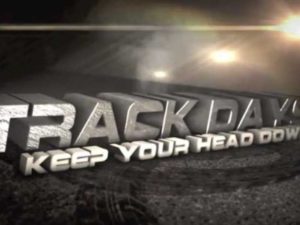 Did the Track Days film get made, even without the Sharks investment? No, no it did not. James and Brian launched a Kickstarter campaign that coincided with the airing of the Shark Tank episode. They were asking for $2 million, but only managed to get under $12,000 from 16 backers before the project was canceled early. Their Twitter has not been updated since after the episode aired on Shark Tank, and the Track Days website is an empty domain.