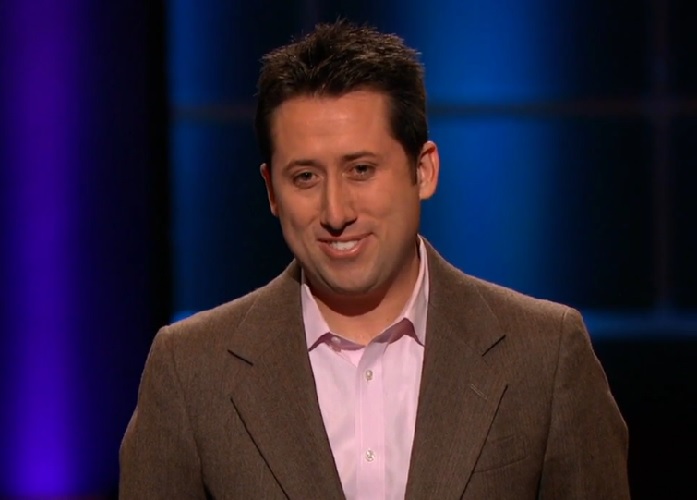 The Sharks frequently come across a business that is outside their vast combined business experience, and in the majority of those cases, they tend to reject a deal due to the unknown factors involved. Crowd-Funding is a relatively new form of fund-raising that has been applied to a multitude of established markets, but the Sharks are traditionally hostile to any pitches that involve crowd-funding. Would they be more interested if the entrepreneur behind a crowd-funding idea was as dynamic as them?

Aaron McDaniel, the CEO and founder of Tycoon Real Estate had a wealth of business experience. He was one of the youngest regional Vice Presidents of AT&T, and was in the top 1% of business sales managers during the decade he spent at the Fortune 100 company. He authored ‘The Young Professional’s Guide to the Working World’ and ‘The Young Professional’s Guild to Managing’. In addition he taught a course on leadership at the University of California, Berkeley.

You would think that such an accomplished businessman would be exactly the sort of entrepreneur that the Sharks would welcome with open arms, and in January 2015 he got the chance to find out, when he pitched his online crowd-funding real estate business to them in the tank.

The enthusiasm and energy of Aaron McDaniel was easy to discern in the tank, even before he had said a word. The entrepreneur marched into the room at high-speed, and even the dynamic sharks looked a little taken aback by his energetic appearance.

It was no surprise that Aaron talked as fast as he walked. He quickly introduced himself, and revealed that he was looking for a $50,000 investment, in exchange for 5% of the Tycoon Real Estate business. Launching straight into the pitch at breakneck speed, Aaron told the sharks that Real Estate had been proven to be the most consistently safe way to grow wealth for hundreds of years. The sharks all nodded their heads, no disagreements with that.

However, Aaron explained, real estate negotiations could be intimidating, difficult and expensive, with the best deals being reserved for the rich. ‘What’s wrong with that?’ asked Kevin O’Leary, but Aaron wasn’t going to be distracted. He told the sharks that he had a ground floor opportunity for them, to join him in a business that allowed anyone to invest in real estate, even if they wanted to invest as little as $1,000.

Mark Cuban showed that he too wasn’t one to waste any time, as he suddenly, and rather unexpectedly announced ‘I hate it, I’m out’. The other sharks looked surprised at the speed of Mark’s decision, but Kevin O’Leary seemed to be enjoying Aaron’s discomfort, ‘I smell jail time’ he remarked.

Aaron looked uncomfortable, but he soldiered on. He explained about the online crowd-funding real-estate business, and assured the sharks that all the deals were professionally vetted. He asserted that investors could look forward to at least eight times the return they would receive from a conventional savings account. The entrepreneur moved on to a demonstration of the Tycoon Real Estate website, he revealed that investors could select the type of investment they were looking for, whether retail or commercial, and indicate exactly how much they wished to invest. Once the funding goal had been achieved the deal would be completed, and virtually anybody could become a real estate tycoon. The Sharks looked far from excited at the prospect.

Robert Herjavec inquired how an investor would get their money back. ‘Boom, give that man a cigar’ remarked Mark Cuban, clearly feeling that Robert had identified the major problem with the business.

Aaron attempted to field the question, but things had not gone too well so far in the tank, and he was showing the pressure. Robert pushed him on the obvious problem of liquidity, pointing out that an investors money would be tied up in a property that was owned by many other people. If the investor needed it back in a hurry, they would be unlikely to re-coup their investment without losing a percentage of it. Aaron tried to down-play the issue, suggesting that it would be easier to pass the investment on if he could grow the Tycoon business to a large enough size, but Robert wasn’t convinced, and the other sharks seemed equally doubtful about the whole concept of the business.

Barbara asked how many deals Tycoon Real Estate had completed so far. Aaron explained, slightly reluctantly, that so far he had only overseen one completed deal. Barbara inquired how much that had been worth, and even more reluctantly he told her it had been for $100,000.

‘What was it, a Garage?’ she asked. Aaron revealed that the $100,000 had been for ‘part of a house’ in San Francisco, but from the look on Barbara’s face he would probably have been better off saying nothing at all.

Kevin O’Leary brought up the subject of Real Estate Investment Trusts, known as REIT’s. They are trusts that own, and usually operate, many buildings, sometimes hundreds, and they offered exactly the same service than Aaron was offering, but investors were able to withdraw their investment far more easily, without penalty. He suggested that Aaron was offering exactly the same service, but with far greater risk, and far less liquidity of assets for the investor.

Maybe it was the pressure finally getting to him, or maybe it was a last-ditch effort to turn things around, but Aaron didn’t deal with Kevin’s point well. He asserted that ‘REIT’s are not sexy’, and the Sharks groaned in disapproval.

Mark Cuban muttered ‘Horrible’ repeatedly, Robert Herjavec asked Aaron ‘Who cares about sexy when you’re making money?’. Aaron tried to defend himself, asserting that investors wanted to have an emotional and physical connection to their investment.

Robert didn’t agree, he asserted that investors would rather have a physical connection to their money, and told the beleaguered entrepreneur that the Tycoon business was not a conservative investment. With that Robert dropped out.

Aaron knew that his prospects of getting a deal in the tank were quickly passing him by, he attempted to appeal to the remaining sharks, but Mark Cuban shut him down. The Texan explained that he had dropped out because investors funds would be irrevocably tied-up once they invested with Tycoon, the business had nothing to offer when compared to the advantages of a REIT investment. Aaron tried to explain that investors with Tycoon Real Estate could sell their stake on after a year, but Mark Cuban snapped ‘To Who?’, and Aaron was lost for a decent answer.

Lori Greiner spoke next. She admitted she had no interest in sharing an investment online, with strangers who she had no control over, she felt the whole concept of the business was fundamentally flawed, and with that, Lori was out too.

Barbara Corcoran was no more impressed than Lori. She described the whole concept of the business as ‘Spooky’, although Aaron was the one who was looking scared. She asserted that investors would risk losing their funds to an irreversible investment with Tycoon. The whole idea was far too risky a business for her to get involved in, and Barbara was out too.

With only the straight-talking Kevin O’Leary left, Aaron must have been sure that he wouldn’t be offered a deal. However, Mr Wonderful had a surprise in store for him, even if it wasn’t a particularly pleasant one. Kevin declared he was interested in the idea and suggested that as he already had an established, and highly respected, investment brand, he could offer a deal as long as Aaron would be prepared to re-brand the company entirely. Aaron looked interested, and Kevin continued. He offered Aaron the requested $50,000 investment, but in exchange for 50% of the Tycoon Real Estate business. Aaron looked shocked, and quickly refused to give up so much equity in the business, stating that 10% was the maximum percentage he would consider offering.

Kevin wasted no more time, ‘I’ve got a proven name, I’ve forgotten your name already.’ he told the entrepreneur, who honestly seemed to be glad it was all over, as he left the tank. considerably less enthusiastically than he had entered it.

Tycoon Real Estate Now in 2018 – The After Shark Tank Update

After the bashing he received in the tank, Aaron could at least look forward to a surge of visits to his website after his appearance on the show, but that proved to be another wasted opportunity for the entrepreneur. He claimed that his site had collapsed after receiving 50,000 unique visitors within hours of his segment being aired, but I was able to find several references to it being unreliable and suffering frequent down-time in the weeks leading up to his appearance.

Aaron tried to drum up interest in the Tycoon Real Estate brand, and did receive some inquiries from potential investors in the months following the show, but they all eventually led to nothing. In November 2015 a rescue package arrived, thanks to Aaron’s already-established competitors. A group of five real-estate crowd-funding platforms joined forces to purchase the business for an undisclosed sum.

The group, led by ‘Patch of land’, who have completed millions of dollars worth of crowd-funded investment packages themselves, hoped to use the brand to prove the sharks wrong, and convince customers that crowd-funded real-estate is the future of investment, and not a risky enterprise. Jason Fritton, the CEO of Patch of Land was keen to set the record straight concerning the industry, and equally enthusiastic about the raised industry awareness resulting from Aaron’s appearance on the show. But unfortunately, now in 2018, the plans of the consortium appear to have come to nothing.

The Tycoon Real Estate website has long since closed, and although the Facebook and Twitter accounts for the business promote press and media interest in the industry generally, the company itself is now nothing more than a name.

Aaron himself has moved into a new venture in the same area. He has developed Access Investors Network, a cellphone app that allows potential investors to view available deals from hundreds of crowd-funding platforms in one convenient place. The app has only been available since June 2016 and so far doesn’t appear to have made much of an impression in the growing, and frantic crowd-funding real estate industry, but something tells me Aaron won’t be giving up on the industry just yet.

For those who would like to book Aaron as a guest speaker, and gain from some of his valuable business experience, the entrepreneur is available for engagements for between $7,000 and $10,000 a time at BigSpeak.com, although I suspect that he won’t want to spend too much time reflecting on his brutal experience in the Shark Tank. In a recent interview Aaron had few positive memories of the show. He asserted that he had expected to be treated like an entrepreneur, speaking to investors, but the sharks behaviour had made him feel that he was being baited, to create interesting TV, and no matter what you think about Aaron, or the Tycoon Real Estate business, it was without a doubt, exactly that.