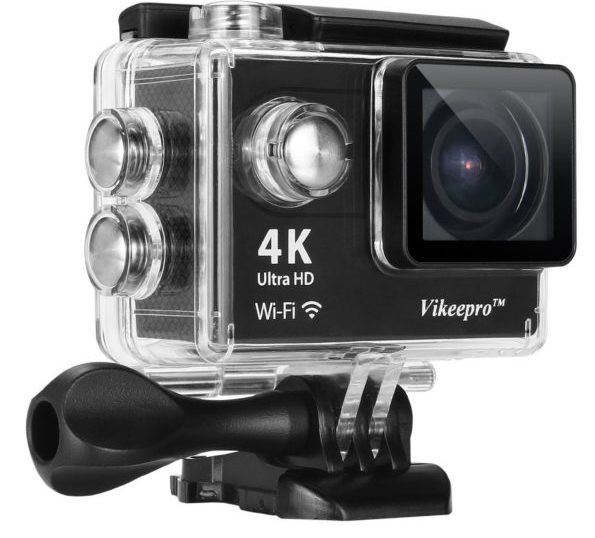 The small camera manufacturer Vikeepro has certainly made an interesting entrance into the Action Cam world dominated by the likes of GoPro. While many manufacturers focus on the newest fads in terms of features to get customers, it seems that Vikeepro prefers to put all their chips on keeping things simple, as well as keeping a price below triple digits. Here, we will take a look at the Vikeepro 4K Waterproof Sports Camera and see how it stacks up.

Having ordered the Vikeepro 4K for under $100 if you click here to get the discounted price on Amazon.com, I thought I knew what I was in for. A cheaply made camera, a handful of junk accessories, and the ability to record 4K at a whopping 10 frames a second. On all counts, I was proven quite wrong. First off, the case it came in deserves to be mentioned. It’s made much better than several other Action Cam bags I’ve encountered in the past, and efficiently packs in a sizable number of accessories.

These accessories, while not the best made out there are certainly sturdy enough to take nearly any situation save a motorcycle accident (which is not a claim I would ask anyone to verify). In particular the waterproof case seemed sturdy, and while I could not test it to see if the camera could remain dry at 90 feet under as claimed in advertising, it resisted the hazards of a pot full of water for the standard 5 minutes without the camera getting damp.

The camera itself at first sight is exactly what you would expect in design from a competitor to GoPro. The simple box design makes all the ports easily accessible, and the large buttons allow for ease of use even when not looking directly at the camera.

After downloading the associated app to my android device and playing around with the settings and capture abilities, I decided it was time to see how the Vikeepro 4K would perform out in the wild. But before I could do so, I had to make a quick stop to pick up a 64GB micro SD card, as early attempts to record footage in 4K made it glaringly apparent that memory would be at a premium as even short recordings made it into the gigabyte range.

While it has been mentioned in previous camera reviews that I do not live in a region with terribly adverse conditions, with this review, I was given a unique opportunity. How does this action cam perform when facing the remnants of a category 1 hurricane? As it happens, pretty well. The 4K certainly didn’t need to endure a high amount of debris, but did need to handle what could be seen as torrential downpours as well as sudden moments of bright sunshine. The waterproof case provided excellent protection, and despite minor fish-eye effect (which is to be expected on a lens that captures 170 degrees), image integrity was for the most part well maintained. During the quickly changing lighting conditions, the camera held up well in terms of color definition and saturation except during points where lightning strikes were close enough to affect the footage.

In testing the back screen while capturing footage (as the idea of holding both camera and phone to the elements would not have been well advised for testing the app), the footage was fairly decent given the 320×240 pixel display. The battery life was likewise not terribly impressive, lasting only a little over an hour at full 4K.

In reviewing the footage from the capture session, two things stood out above all else. The first is, while the definition of the images were amazing, the frame rate was noticeably slow at a later measured average of 24FPS at 4K. It is to be expected that 1080 or 720p would subsequently hit closer to the 35 or 60FPS of most other brands.

The second was, of course, the audio. Audio has never been a very important factor for base models of action cam, and this was no different. The Vikeepro Action 4K is better seen as a silent video recorder, and in reviews and discussions of other users as well as with company representatives, it is revealed that any plans to allow for a microphone add on is not in the works. Instead, using the normal method of editing in audio in post for your footage will again be a decent method of getting around this problem.

The footage, when viewed through the Android app, is impressive and rivals any other model that I’ve encountered. However, there are no abilities to create slow motion footage, whether while recording or in post, and stabilization is not an included feature which can be a problem for those who don’t have the steadiest hands, or the smoothest stunts.

Vikeepro seems to have made exactly what they set out to. A simple, well built and cheap action cam that makes up for its lack of features with excellent video image quality. For its price, it is a fantastic entry level camera, rivaling some of the core components of action cams up to five times its price. For those who don’t care for slow motion footage or stabilized imaging, this is a fine choice for both the camera itself and the wonderful accessories. One aspect that came as a surprise is that outside the camera, the company has quite a unique way of handling customers. Instead of a sturdy, formal business website, Vikeepro instead opts for communications with its customers through email and the very active Facebook page, which features a decent number of customer shots. Of course, this also means that finding the legitimate product can be a little bit of a problem if one searches outside of Amazon.

The good news is you can click here to get the Vikeepro Pro Sports cam for the best price online.