If there’s one thing (other than money) that can convince a skeptical investor, it’s a good story. If there’s one story (other than fantastic sales) that can convince them, it’s one from an underdog. If Erika Welsh and Keeley Tillotson aren’t underdogs, then who is? Their business was born from desperation. Erika and Keeley were two college roommates who met a disaster: they ran out of peanut butter. After presumably exhausting their ramen reserves, they had to get creative. The pair remembered that they had a stash of peanuts stored away. Legumes, meet food processor. In minutes, they had created their own peanut butter, which they called Wild Squirrel Nut Butter. Not today, starvation. Not today. 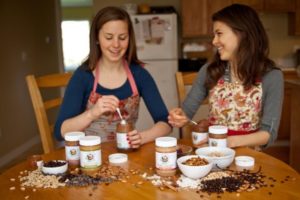 As it turned out, Erika and Keeley’s peanut butter concoctions were not just edible: they were delicious. The experimentation continued, with such varied ingredients as cinnamon and pretzels. Before they knew it, all of their friends and family wanted a taste. These two University of Oregon sophomores had a blossoming business on their hands. In half of a year, they had sold thousands of jars and were expanding into supermarkets throughout Oregon. However, their business was bottle necked. They would need some help from the sharks to fund future production and source cheaper ingredients.

Erika and Keeley entered the tank meekly, but their offer was anything but: ten percent of their business for fifty thousand dollars. They would now have to convince the sharks why their infant business was worth half a million dollars. The underdog story didn’t hurt – it meant that they were hungry for success. Plus, any investors would be getting in on the ground floor. Their product quality didn’t hurt, either. The peanut butter was tasty. Really tasty. Barbara couldn’t get enough of the Sneaky Cinnamon variety. The sharks passed around their samples, eager to try all four versions.

Sufficiently sated, Daymond wanted all the information on the table. “Thousands of jars” meant thirty-five hundred since the business’ founding in January of 2011. On those jars, they had earned fourteen thousand in gross sales and half that amount in profit. While their sales were currently confined to their website, farmer’s markets, and campus street fairs, expansion into grocery stores was imminent. Shelves would be tricky. Currently, each jar was produced for three dollars, sold to stores for four dollars, and retailed for six dollars. Until they had better negotiating power and cheaper ingredients, they’d have to deal with the slim one dollar profit margin.

Mark uncovered that so far, Wild Squirrel had no equity investors. Keeley’s parents had put fifty thousand dollars into the business, but the roommates were still sole owners. While neither was a business major, Mark was still glad that they hadn’t yet been diluted and were willing to learn. Unsurprisingly, Kevin was still thinking about profit margins. They were selling jars to stores for four dollars and making them for three. They needed to cut their production costs to a dollar for him to be comfortable with the business model. Keeley thought they could make it work, but Kevin wasn’t convinced.

Another concern was their time dedication. Both Erika and Keeley were full-time students. If something went wrong or there was a business meeting in the early afternoon, who would be there to run the business? Erika and Keeley claimed they could do it. First of all, the university was its own micro-community, a sort of test market. While students, they could also take advantage of the entrepreneurship program at the University of Oregon. After a trial period of one more semester, they planned to reevaluate. Erika offered that with both working part-time on Wild Squirrel, they made up a single full-timer. This drew protest from some of the sharks. Barbara, Robert, and Mark agreed that this wasn’t enough. They would need at least one person available at every hour of the day. 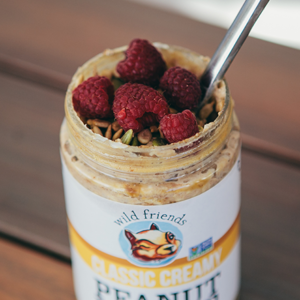 Three sharks were already breathing down the business partners’ necks, but things got worse. Daymond didn’t understand the business, and at this stage, starting from square one wasn’t worth his time or money. He dropped out. Mark followed. He explained that all of their competitors were putting more time into the peanut butter business. How could they conceivably compete with someone working practically 24/7? Mark was out. Erika and Keeley tried to make up ground with promises. They were dedicated. They would work hard. The warm fuzzies wouldn’t work on Kevin. He predicted that the competitive world of peanut butter would age them. With every failure, they would grow older and wiser. Maybe then, he would take another look at Wild Squirrel. Until that day? No. He was out.

“We have never cared about anything as much as this peanut butter,” Erika pleaded. “The company’s value is valued the way it is because it deserves it. We deserve it. We’ve worked really hard,” Keeley said. They knew they only had two more chances to make a deal. Unfortunately, they were down to one, since Robert interpreted Keeley’s words as entitlement. According to him, life isn’t about what we deserve; it’s about what we create. Daymond put it well: “It’s almost like expecting a bull not to attack you because you’re a vegetarian.” In the scheme of things, good intentions don’t mean much. Not quite seeing the focus and dedication he was looking for, Robert bowed out.

Only Barbara was left. Barbara, who takes chances on new companies, on hard-working young women, on
flawed business models. Kevin warned that if she invested in Wild Squirrel she would regret it, but Barbara brushed this off. The room was silent. Finally speaking up, Barbara admitted that she was conflicted. On one hand, Erika and Keeley had come forward with an overly optimistic view of their business and the business world in general. In her experience, similar companies have needed far more than fifty thousand dollars to get started. This amount would only get them through the next production run or two. On the other hand, something about them inspired her trust. Perhaps against her better judgment, Barbara was prepared to make an offer. She would hand over the fifty thousand, but not for less than forty percent of the company.

Understandably, Erika and Keeley didn’t jump for joy. In a sentence, Barbara had reduced the valuation of Wild Squirrel by seventy-five percent. Keeley grasped at straws. “Thirty-five? We’d be happy with thirty-five.” Mark Cuban responded for Barbara with a dumbfounded shake of his head. They had one offer on the table that they would throw away for five percent? “This isn’t just about money. It’s about access,” Barbara said. It was true, she was three-for-three in food business deals on Shark Tank. She knew what continued success would take. At long last, Erika accepted her offer. A sigh of relief was heard from everyone in the tank, and congratulations abounded. Although an ambitious initial valuation and a shaky understanding of the business world hurt Wild Squirrel, they still managed to get a deal. The young business partners looked pleased and were excited for Barbara to help take their peanut butter “to the next level”.

In September 2012, only four months after Wild Squirrel’s initial air date, Shark Tank checked in for an update. Since making a deal, Erika and Keeley reevaluated and decided to take the Zuckerberg approach. They dropped out of school and focused on their business full-time. Keeley calls it the best decision they’ve ever made. Their dedication paid off, and sales climbed from the tens of thousands to over three hundred thousand in months. In a year’s time, Wild Squirrel was set to sell over a million dollars. Following a Shark Tank pitch based on promises and expectations, Wild Squirrel now had the numbers to back up their success.

After filming their initial episode, the roommates went home and decided to work like they didn’t have a deal at all. They continued to hustle and earned space in retail stores. It was a good thing, too, because Barbara’s deal was not as it seemed. Erika, Keeley, and TJ Hale of the Shark Tank Podcast went into detail on Episode 38 of the program. It’s an unfortunate reality that no deal on Shark Tank is final. In the coming months, the sharks’ investment teams do due diligence on every “completed” deal. During this period many of them fall through. 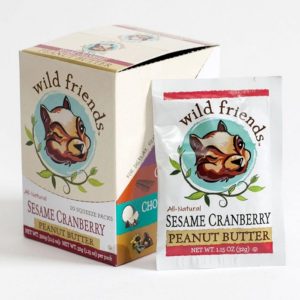 Despite not closing their deal, Erika and Keeley kept pushing. Their experience on Shark Tank changed the Wild Squirrel for the better. As if to signify turning over a new leaf, they quickly rebranded to Wild Friends. In February of 2012 (after Barbara’s deal fell through but before the initial air date) they ran a Kickstarter campaign to get the word out on their own. Riding the popularity of a viral rap video, they raised the ten thousand they needed. Their hustle didn’t stop there: Wild Friends also made it into Oprah’s O magazine and the Natural Products Expo in March of 2012.

Barbara or no Barbara, Erika and Keeley were determined to succeed. In a year and a half, they pushed Wild Friends into over twelve hundred stores across the United States, winning accounts with businesses like Costco and Fred Meyer. During Wild Friends’ Shark Tank début, most of the sharks expressed concerns over Erika and Keeley’s time dedication to the business. Both now admit that they were tempted to drop out, on the spot, on national TV. While they ultimately held back from making this kind of snap judgment, they eventually decided to do what was necessary.

Wild Friends’ story is most inspiring because it speaks to “wantrepreneurs”, aspiring business-people who lack practical skills and experience. Neither Erika not Keeley had any business or finance experience prior to appearing on the show. The very concepts of “equity” and “valuation” were foreign to them. While this may have led to an unprepared presentation, it didn’t spell the end for their business. By learning on the fly, using their instincts, and creating a product that people loved, Erika and Keeley have exceeded everyone’s expectations, including their own.

Erika and Keeley’s line of nut butters, now known as Wild Friends, is available in select Costco, Fred Meyer, and QFC stores, among others. Wild Friends products are also sold via their website.