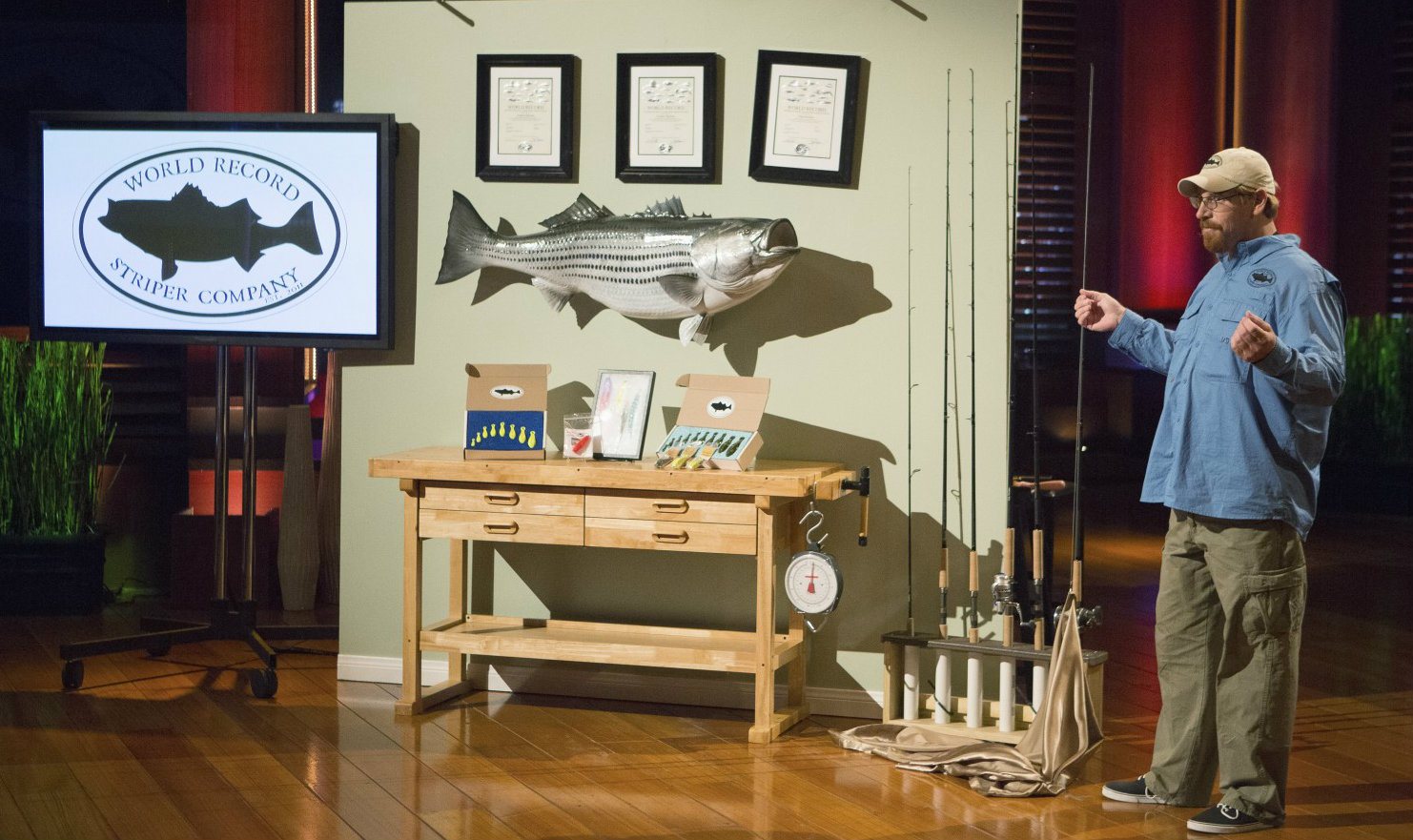 Before appearing on Shark Tank, Greg Myerson invented and developed his World Record Striper Company RattleSinker for 15 years. He perfected the fishing lure and caught many large fish with it. He even holds a world record for catching the largest striped bass. He got his sales up to $55,000, but it took three years. Will his utility patent win over the Sharks despite his low sales? 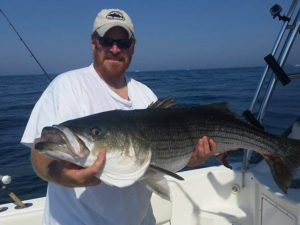 Greg Myerson walked out onto the stage and introduced himself to the Sharks. He founded the World Record Striper Company in Connecticut. He was asking for $75,000 in exchange for 20% of the business. He needlessly introduced himself as a fisherman, which had Mark Cuban grinning. Greg said that the secret to catching large fish is using the correct bait, even if he was fishing for a Shark. He brought out a fishing pole with a stack of singles and flicked it to Kevin. Kevin caught it and laughed. He threw it back, complaining that it was just “ones.”

Greg said that he uses his product when he goes fishing. He calls it, aptly enough, the Greg Myerson Rattle Sinker. He told the Sharks that it attracts big fish by mimicking the sounds of a fishes favorite foods. Greg shook one of the sinkers and said that the rattling was the noise of a fish’s dinner bell. The Sharks looked fairly confused. Greg stated that he would be the most famous fisherman in the world. He pulled the cover off a mounted fish. Greg told the Sharks that the fish they were looking at was an 85-pound striped bass. Kevin looked impressed and asked if he caught the fish himself. Greg confirmed that he did. He said it was the most sought after the world record in the fishing arena. He had the certificate from the actual world record framed and mounted on the fake wall on stage. Greg told the Sharks that it had taken him a long time to catch and reel that fish in, and he hoped it did not take as long to convince the Sharks to fund him.

Greg then passed out samples of his product. As each shark received their sample, they played with it, shaking it around. Lori commented that it’s kind of like a rattle, and Greg said that’s exactly what it is. Daymond asked if he caught the record-winning fish using the Greg Myerson Rattle Sinker, and Greg confirmed that he did. He advised them that he holds three other world records that he caught using the same product. Greg asserted that the striped bass is America’s fish, and to find the largest one is the most sought after world record. The Sharks questioned that, and Greg told them that the striped bass is everyman’s fish. You don’t need special equipment or a yacht to find them. Lori looked amused and said that she goes to Martha’s Vineyard, and the fishermen there love striped bass. Greg said that his product is not just for striped bass, it works on all fish.

LorI asked Greg why his product is the best thing for catching fish in general, and how it managed to help him catch his world record fish. Greg told her that it was an excellent question. He said that he had been a fisherman all his life, starting out in the sewer at age two. He said he began using flies as bait when he was eight years old and graduated to using feathers from his grandmother’s dead parrot. He told the Sharks that he caught a trout with his homemade fishing flies, and it got his picture in his local paper. Mark Cuban looked impressed. He even called Greg the man.

Greg learned that fish hunt using sound and vibration rather than sight. To make the lure work, he would pull the line around with the Sinker on it, which made a sound that the fish can hear. Greg said that it trickles the fish into thinking that it was food. Mark asked why no one thought of it before, and Greg said that he was the only one smart enough to do it. That had all the Sharks laughing. Mark said he like Greg and his humble brag. Lori asked where Greg was selling his product, and for how long. Greg stated that he only started selling them two years ago. He made the decision to sell them after he won the world record. He spent lots of time developing it for his needs, getting the decibel levels down and filing the patent claims.

Lori asked him if he had a patent on it, and Greg confirmed that he did. Robert asked him how many he has sold, and Greg told him 7,000 units in two years, which equates to $55,000. Mark laughed and said that Greg wasn’t the smartest man in the world after all. Greg agreed that he wasn’t the best business person, but he was an excellent fisherman.

Daymond asked him where he has been selling the product. Greg said that he sells them at fisherman’s trade shows. He told the Sharks that h makes each one himself in his basement. He stated that he just graduated above that. He has the product trademarked. Lori asked if that was the retail packaging for the product. She pointed to the display case, which Greg told her that he made himself. Greg directed their attention the plastic bags that contained the product as well as instructions.

Mark said that he was not an entrepreneur yet, He was still trying to figure it all out. Greg confirmed that this was still the very beginning of his business. Kevin said that there are already distributing to fisherman’s shops. He asked Greg if it would be better to license the product to one of the larger, well-known distributors since he was not good at business. Kevin also mentioned the lack of packaging and distribution.

Daymond said that the product would be better suited to an infomercial since most people would not grasp the concept. Robert asked if it was part of the problem. Before Greg could answer, Lori said that you have to hear it shaking to understand the acoustics. Greg told the Sharks that he was not prepared to market it for retail yet, so there is not a problem with his sales.

Mark asked how much he was selling if for, and what the cost is per unit. He told them that he sells the 5 oz product at $6.49 retail price, and it cost $2.50 to produce. Mark said that he was going to make the same offer he made to a similar company. $80,000 in exchange for 33%. He said that Greg would still be developing the product, but his other investment would handle the distribution. Greg wanted to see what the other offers were before he shook on it. Robert and Daymond went right out. Kevin spoke up and said that he also had an offer. Mark groaned and told Greg that if he listened to Kevin’s offer, he was out. Kevin stated that his offer might be much better, trying to entice Greg away from Mark’s offer. Kevin said that he could sell the rights to a larger company, and Greg could just get a paycheck every month. He stated that ShellBobber is good, but still a small business. Mark warned Greg that he was falling into the “Mr. Wonderful” trap. Greg would have to make a decision, and fast.

Greg struggled to make a decision as the Sharks taunted him, and tempted him to go one way or the other. Kevin said that the kind of opportunity that he was offering only comes around once in a lifetime. It seemed like he was offering Greg wealth beyond what he could imagine.After a moment of hesitation, Greg told Mark that he would take the deal. They shook on it. Kevin stated that he made a mistake by not seeing how much cash he could have earned him. Greg looked proud of himself as he walked offstage.

World Record Striper Company in 2018 – The After Shark Tank Update

Greg Myerson seems to be doing well for himself. In May of 2016, his Shark Tank fame allowed him to be selected by NASCAR to sponsor a car. According to his website, Greg could barely afford the sponsorship, but he made it. The World Record Striper Company had #55 car wrapped up with their logo. The car raced in the Coke 600 on Memorial Day. World Record Striper Company has a number of different products available for sale on their website. The lures also sell in stores and on Amazon.com. The Amazon reviews are mixed. It seems like most people are complaining that they only received one lure for their money when the item picture displays 10. World Record Striper Company is active on many social media sites, such as Facebook and Twitter.