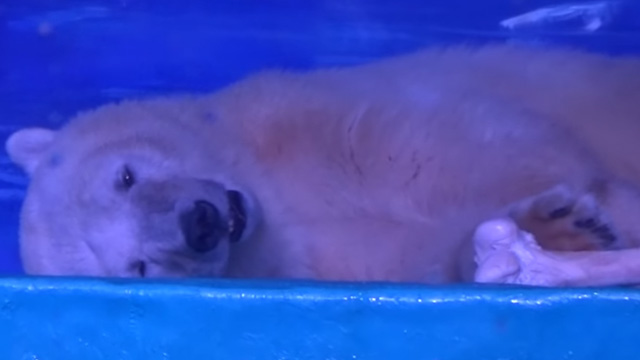 A few months ago, a polar bear called Pizza made headlines after videos showed him living in a Chinese mall. The bear, which is living in poor conditions, was called the world’s saddest bear after the images and videos surfaced. But that could change soon as a UK wildlife park has offered to take him in.

The polar bear has been living in an ocean themed area at the Grandview shopping mall in Guangzhou. Since the videos and images of the bear surfaced, people have asked for Pizza to be sent to another place with better conditions. The Yorkshire Wildlife Park in Doncaster has offered to remove the bear from the shopping mall.

Animals Asia, a charity that helps save wild, endangered and domesticated species through the Asian continent, revealed on social media that Pizza the polar bear had been offered a new home by the Yorkshire Wildlife Park. The charity has also collected thousands of signatures from people asking for the aquarium to be closed.

Pizza’s current home doesn’t look very fun or comfortable but the Yorkshire Wildlife Park wants to change that soon. Animals Asia Welfare Director David Neale said the good news for Grandview is that they now have the chance to put their mistake right.

It is not difficult to see why Pizza the polar bear’s home has led to a number of petitions and offer from the Yorkshire Wildlife Park. Pizza did not look happy in the videos and images that surfaced a few months ago. Pizza the polar bear is in the middle of the shopping mall and usually sees hundreds of people near the glass display taking a selfie or trying to catch his attention.

The Yorkshire Wildlife Park plans to give him better living conditions if the offer is accepted. Many petitions were posted after the pictures and images surfaced and all of this could soon lead to a better home for Pizza. According to the charity, the offer also asks the shopping mall not to replace the polar bear with any other animal. The organizations have not offered any money for the polar bear.

The Yorkshire Wildlife Park was opened seven years ago and has more than 300 different animals. The park would be a great place for Pizza as there are already other polar bears living there. The Project Polar Reserve opened in 2014 and is home to four polar bears.