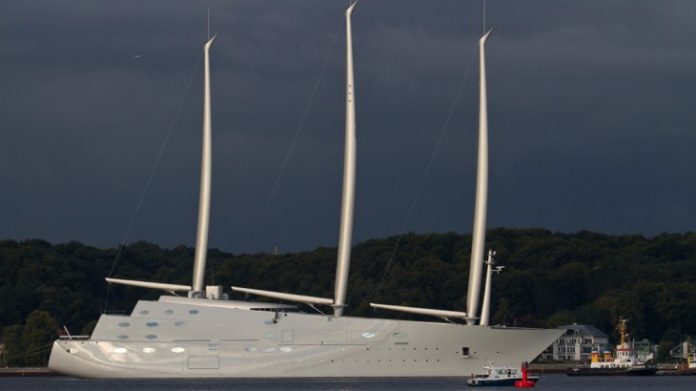 A lot of billionaires around the world have luxury yachts but one of the biggest has now been seen sailing in Germany. The giant yacht is owned by Andrey Melnichenko, who this year ranked 139th in the Forbes billionaires list.

The yacht is called Sailing Yacht A and is not difficult to see why it costs $400 million. The vessel makes any other boat near it look very small. The Sailing Yacht A, which is the latest in his fleet, was on its first sailing test when the first pictures surfaced.

The Sailing Yacht A, which is said to be one of the largest sailing yachts in the world, took more than four years to build. The Russian billionaire reportedly ordered the luxury yacht in March 2011. What does the $400 million luxury yacht come with? 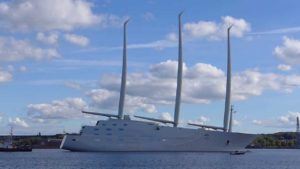 The Sailing Yacht A has a lot of the things that are found on other expensive yachts plus more. The yacht is so big that it has a number of elevators and staircases. There is also a helipad and a submarine.

The gigantic yacht has the latest in technology, with a digital system that allows it to move parts of the yacht by simply swiping. The yacht is so big that there is a crew of more than 50 people.

The Sailing Yacht A is one of the world’s biggest but the Russian billionaire also owns the Motor Yacht A. The luxury yacht is one of the most expensive ever built and it was recently reported that the billionaire put it up for sale as he waited for his new $400 million yacht.

The Motor Yacht A has many of the features that other yachts bring but its design is inspired by a submarine. It was the sixth largest yacht in the world when it was completed in 2008. The Motor Yacht A is still one of the largest in the world but the billionaire will soon replace it with the Sailing Yacht A.

The Motor Yacht A is reportedly being sold for $300 million and while it’s not the biggest in the world, its design makes it one of the most recognized in the world. The luxury yacht has three swimming pools and a helipad.

The Sailing Yacht A was spotted during its first official sailing test but will it reportedly be delivered to Andrey Melnichenko in early 2017.