Bluetooth speakers are a huge market now, so it’s not surprising to see Harman Kardon and Bose release their own entries into the market. Bose has the Soundlink system, while Harman Kardon has released the Onyx Studio. Both of these speakers are tiny little packages, yet deliver powerful, room-filling sound. 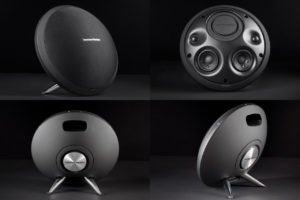 The Onyx Studio is a little black disc-shaped speaker, measuring around 11 inches. The Onyx Studio actually has a concave shape, allowing sounds to project to wider angles than non-concave speakers. The Onyx Studio suffers from oversimplified, minimalist controls, consisting only of a power button, two volume buttons, and the Bluetooth pairing button. The only inputs available are the power port and a micro USB port, which only allows for firmware and software upgrades to be delivered to the speaker.. Keep in mind, this means no auxiliary port for the Onyx Studio. The Onyx Studio does not have speakerphone capabilities.

The Onyx Studio has 3-inch woofers, two ¾ inch tweeters, and two passive radiators; the combination of the entire system delivers around 60 watts. The frequency range is from 60Hz all the way up to 20kHz. The entire setup is hidden behind a black matte cover, marked with the Harman Kardon logo. The look of the Onyx Studio is very sleek and professional looking, and is sure to fit in with nearly any home studio setup.

The Onyx Studio is expensive, though, initially shipping at $400. The Onyx Studio can now be found on sales for as low as $130, since it was released in 2014.

The SoundLink has simple controls, featuring a pause/play button on top and volume controls. Unfortunately, there are no speakerphone controls for the SoundLink, either. The SoundLink is powered by an impressive battery, lasting for around 5-8 hours in a lifespan, depending on the volume and age of battery. The SoundLink Color does include an auxiliary port, as well as Bluetooth functions – a button on the control panel allows the user to switch between the inputs.

Overall, the SoundLink Color is an impressive little sleek speaker that comes in a range of colors. Since its launch in April of this year, the price can be found anywhere from the original asking $130 down to sales of $90.

Both speakers are impressive little packages, but as with every piece of technology, the user has to evaluate their needs and wants. The Harman Kardon Onyx Studio is obviously not a very portable speaker, since it requires power from an outlet and includes a laptop-charger like brick/adapter. The Onyx Studio also boasts a much more impressive system, equipped with two woofers and tweeters; in combination with the radiators, the Onyx Studio can properly deliver any studio-quality sound. Unfortunately, since it’s Bluetooth powered, if it were to be used in a music-producing studio, the setup of the computer would have to include Bluetooth, which can be its own issue since high-quality fiber is favored for delivering high quality sound over Bluetooth.

The SoundLink Color, however, is much more marketed towards average consumers. The price point of the SoundLink color is much lower than the Onyx Studio at a whole $40 lower, depending on the sites used for comparison. The SoundLink color also has the advantages of a portable speaker powered by a rather large battery, making it much more attractive for the average consumer – why would someone who just wants music in their kitchen want to work unplug and haul the much larger, heavier Onyx Studio? The SoundLink Color also benefits from having an auxiliary input, something that the Onyx Studio suffers from.

Unless a user specifically wants a Harmon Kardon Onyx Studio to fit into their setup due to the color and powerful sound, the SoundLink Color would be a better purchase. It’s much more portable, personable, and customizable. The Auxiliary port and the battery are what give the SoundLink such an advantage, since this allows the SoundLink Color to be taken outside. The Onyx Studio should not be dismissed, though, as it’s a great addition to any media entertainment center, but might require its user to rework their entire setup to include the speaker.