In her introduction video, the owner of Daisy Cakes introduced her business. Kim Nelson said that she was from North Carolina, and that she was the owner of Daisy Cakes. In the video, she siphoned out flour into a bowl. She said that she got the recipe for the cakes from her grandmother, Daisy. The video showed a cake next to a tin that said Daisy Cakes. The recipe was passed down from generations of Nelson women. Kim insisted that there is lots of Southern love and everybody, as she grated lemon onto a counter. Each cake is packaged in a tin, and delivered Kim and her mother Geraldine crafted each cake by hand. She insisted that they were two of the hardest-working woman that anyone would ever meet. So far, Kim said that her family has invested over $93,000 in the business. She said that there is no more money to put in, and she really needed the help of the Sharks. 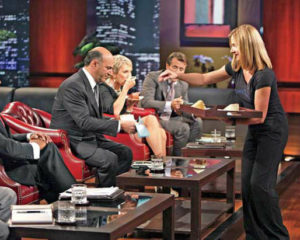 The video ended, and came walked out onto the stage and into the Shark Tank. She greeted the Sharks, and said that she was very excited to be here. Kim asked for $50,000 in exchange for a 25% Equity stake and Daisy Cakes. Kim claimed that her cakes were the best cakes that you would ever eat. She said that they were the family recipe, and they weren’t made with any preservatives or artificial flavorings. They were all made from scratch. She said that the best part was that Daisy Cakes delivered. She said Kim said that she wanted the Sharks to try a sample, and she began to hand them out to each Shark. Robert and Daymond each tried their piece, and they both said that it was very good.

Kim said that her best seller was the carrot cake, and each kit contains 1000 carats in each the carrot cake also contained golden raisins, cinnamon, and cream cheese icing. She said that Kevin tasted her new lemon cake, which had fresh cream cheese icing with lemon curd, they just their own lemons, and sugar there are no additional ingredients. Kevin asked how she gets the kids out to the customers. Kim explains that you could place a phone or Internet order, and the cakes were prepared for delivery. Barbara want to know what the price per cake was. Kim sent that if you placed an online order, each cake cost $44.50. Barbara said that that was pretty pricey, and wanted to know what the price was per cake in order to make it. Kim let her know that each cake cost $18 to make.

Barbara asked her how she ended up getting into the cake business. Kim insisted that it was her god-given Talent. She ended up taking courses, and accept them, so she decided to start the business. Barbara and Robert said that the cakes were amazing, and that they were the best that they never had. Kevin asked how customer acquisition work. Kim said that she went to local shows. Daymond asked her if this was where she got Distributors for the product, but Kim told him that it was not a wholesaler, but instead individual customers. The shows were in wholesale events, but fundraisers and school craft shows. Kevin O’Leary want to know what are sales for life. can pontificate a little bit, saying that she was very popular in the south, but Larry wanted a number. She said that she had done $27,000 in 3 months. Barbara asked how many shows they had attended in order to make the $27,000. Kim said that she had done 3 shows in Baton Rouge, as well as other cases. Robert wants to know what the strategy would be if the company got big, as they couldn’t put her in a car and sent her all across the country. Kim said that she would love to get on a Shopping Network.

O’Leary want to know how they would increase production if he were to you put her on a Shopping Network, and they got 100000 orders for cakes. Kim said that they would have to do a little different way of making the cakes. Instead of just her and her mother producing each cake, they would most likely have to hire a helper. Kevin asked how they produce the cakes currently. Kim said that they had a commercial kitchen. Kevin asked her how many she could make in a week, and Kim insisted that she could make 5000 cakes in 30 days. David wants to know if she had made any sales to a grocery store, or a wider retailer. Kim said that she was in the process of having her homemade lemon curd sold in Whole Foods. Kevin wants to know how she planned on producing enough product so that Whole Foods could do a roll out of the lemon curd across the country. Kim said that they wouldn’t need the Sharks help for that. It sounds like she didn’t plan that far ahead.
Kevin said that he looks at new product catalogs monthly, and he sees a lot of people that are already selling cakes like this. He wanted to know what made her unique. Kim said that could be fixed by just letting the customers taste it, or getting a celebrity endorsement. Robert said that she already had a small Regional strategy that was working for her. He wanted to know why she couldn’t continue to do all the cooking and marketing herself at small trade shows.

Kim said that she would Daisy Cakes to be a huge business, so that everyone knew how awesome her cakes were. She wants people to think of her first when sending a gift. O’Leary said that there was a big problem with that. He told her that even though the cake was the best he’d ever tried, he didn’t think it was a business. He is not ready to go up to the challenge. He went out.

Kim nodded, and looked upset. Kevin said that he saw this as a word-of-mouth type business. It would be hard to sell the cakes without the people trying them first. He went out. Robert told her that 85% of businesses were small businesses that did nothing except provide a living for the owner. He said that those types of businesses were not investable period Robert told her that he wishes her the best, but he was out. He did tell her that he would be a customer. Daymond went out next, saying that the business was also too small for him. Daymond and Robert continued to eat the cake. O’Leary told him that the only Shark that was still in was Barbara, and she hadn’t made a decision yet.

Kim took a deep breath, and said that she accepted those terms. Barbara 1 up to the stage, and hug to Kim. As she walked off the stage, O’Leary told her that she was crazy for investing in that tiny business. Barbara said that she was confident that she would get her money back because Kim was a hustler. Barbara said that Kim reminded her of a business but she had previously invested in. Barbara insisted that Kim would come through. In her exit interview, Kim said that every case she sold, she would be thinking of Barbara and thanking her. She said that she thought the business would Skyrocket due to an investment from the Sharks. Let’s see if she was right.

Daisy Cakes Now in 2018 – The After Shark Tank Update 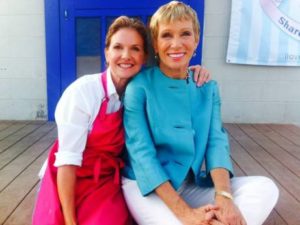 Since successfully securing a deal on the Shark Tank, Kim has been a busy baker.After the episode aired, Daisy Cakes got so many new customers that their website crashed! It looks like Barbara was able to get her investment back fairly quickly. Even now, after four years, they seem to be going strong. The Facebook page for Daisy Cakes is regularly updated. Kim has made many television appearances on news networks, and shows such as The Chew and The Taste. She even has a cookbook out called “Share a Slice of Love.” It looks like the book is out of print, but you can still purchase used copies on Amazon.