After last weeks impression review of three flagship Dorco razor blades I thought it might be time to pit them against the competition. Starting with a few of the choicier designs from that old industry veteran Gillette. Gillette have been around for nearly as long as the safety razor itself, and have come up with many innovations, shaping the modern razor into what it is today. Up until quite recently I used a Fusion razor almost exclusively, so going back to one for this review was wonderfully familiar.

Dorco are a South Korean company, making in roads all over the world. Their US branch has been in operation for a while, and their UK services are excellent, taking on the subscription shave clubs. Since 1955 the have crafted top quality razor blades, and in the last few decades have been innovating in the field. They offer a seven bladed razor, which I haven’t got a chance to try yet but I am excited to do so.

This week I will be pitting the Pace 6 Plus against the Fusion. The Fusion is a solidly designed five bladed razor, and the quality on offer is up to Gillette’s usual standard. There may not be much in the way of design flourishes, but there doesn’t need to be. The Pace 6 Plus is a six blade design, and with the Plus variant Dorco really have poured their heart and soul into it. Every aspect of the build has been tweaked, from the shape of the handle to the chemicals used in the lubricating strip.

The methodology is simple. I will shave once every three days, first with the Gillette then with the Dorco. I will use a five step process, first an exfoliant, then a hot towel followed by warm foam. The Shave, step four, will be a three pass shave, with the grain, perpendicular to the grain and finally against the grain. The last step is the application of a menthol infused moisturizer, to close of the pores and reduce irritation. The end result should be, and has been in the past, a perfectly smooth face with zero stubble.

I am a huge fan of razors with lots of blades. There was a time when I scoffed with the rest of them, guffawing at the concept of adding more and more blades to a razor. But the difference, not only in time shaving, but also in quality of the shave has to be felt to really get. 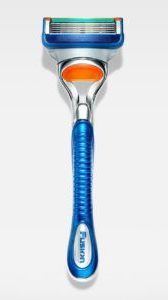 I used a Fusion for a long time before switching to a cheaper model. I was not dissatisfied with the razor itself, just found myself without the funds to keep up the habit. In the last while I have been using the Dorco blades, so going back to this was a little strange. First a look at the default handle. It is the quintessential design. Easy to hold, lots of grip fins, but it lacks in the range of movement department. There is some give, but not enough for me. The blade itself is very well designed, five tightly packed blades and a thin trip at the top.The lubricating strip at the top is a bit of an unknown, Gillette do not have detailed information on its make up freely available. It cooled and glided easily, for a while at least, so it gets a thumbs up from me in terms of composition. The unique feature here is a nice trimmer blade on the rear of the cartridge. Easy to miss, but it does a tremendous job of shaving the tricky area under the nose.

On the to the shave itself. Well I came away from this feeling a little underwhelmed. The first pass went by wonderfully, as did the second. The problem came in the third pass.As I rinsed the blade after the second pass I noticed the lubricating strip had vanished. It just wasn’t there. It is possible that I just had a bad cartridge, so I will be coming back to this blade in the future, but this shave became slightly more difficult that in needed to be from then on. The final pass was something of an attrition. Not too much tug, but with a 5 bladed razor I expected none, and was disappointed. Not cuts sustained, so that was a small blessing, but still.

If you are after the stubbly look you will have to look elsewhere. After my first pass I was essentially done. There was roughness, enough to warranty the two further passes, but it was pretty much only noticeable to myself. The trimmer is a nice touch here. As I tend to point out, more and more folk are wearing beards, so having the option to style your facial hair is a must for any company trying to snag a bit of that market.

Overall I had a worse experience than I feel I should have. I think I will be adding an addendum to this article next week, when I have the free time to shave with another Gillette Fusion razor. In the meantime I have to judge this to be underwhelming. 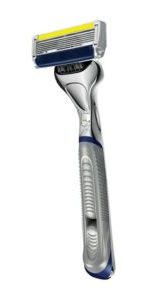 This is only the second time I have used the Dorco Pace 6 Plus blade, and I was as impressed with the quality on offer as I was the first time. The handle is a little more advanced than the Fusion, with a good range of motion. They are as ergonomic as each other, and equally easy to keep a nice tight grip on. The lubricating strip on this build is itemized, unlike the Fusion, so we know for a fact what is used. Aloe Vera, vitamin E and Lavender extract. A balanced combination, a mix between anti-aging vitamin E, cooling Aloe Vera, soothing and scented Lavender. Not too shabby. This build has a trimmer blade at the back as well, a tight packed little blade that made short work of the philtrum, even if its position meant I could only shave one way.

The shave itself was sublime. Like silk over a bread knife. This blade glided across my skin without issue. The first two passes where enough to stop on, but I finished up with the third and was left with what is possibly the closest shave I have every had. There is still the slight stubble of the Adam’s apple to deal with, but at least I didn’t slice it open, as I am wont to do. These two razors are not appropriate for those looking for a tight stubble look, their first pass shaves too close for much to be visible, better to look at the three bladed variants from which ever company you prefer.

I already mentioned how good that shave was. The Lubricated strip stayed on til the end for this build, and the shave was better than any I have had before. I am looking forward to the seven bladed build from Dorco, because at this rate it is the only model on the market that might be able to beat the Pace 6 Plus.

The Dull Blade – Dorco Pace 6 Plus Vs Gillette Fusion

Now we take a look at the longevity of the builds. I leave the razors sitting in a container after I use them, for two days after shaving. Then I test the now no doubt more blunt blade. Getting your money’s worth is important, these cartridges cost a fair amount of cash so getting only one shave out of them would be ridiculous.

The Fusion came out a little worse for wear after my first shave with it, the lubricating strip having ceased to exist at some point in during my last shave, so i went into this shave a little trepidatious. It didn’t do too badly, but the tugging was present from the first moment I put the blade on my skin. I made it to the end relatively unscathed, some slight redness, but still clean shaven.

The Pace 6 Plus was a whole other matter. I swear it was an easier shave the second time. I could be a little rougher, a little faster, I knew it was unlikely to cut me at all. I got to the end of the shave, shaved to the skin, in less than ten minutes. It was probably my closest fastest shave yet. Very impressed with this.

The price is going to separate these two, and I am sad to say that it is another poor showing for Gillette. It is no lie that they make some of the finest shaving products in the world, but I feel that their prices are not as competitive as they should be, a Fusion, with a handle and 4 cartridges will cost you nearly $30, the same as the Mach 3’s rrp. The same from Dorco, handle and 6 cartridges of Pace 6 plus, is a mere $16.50.

One final note on these razors. Buying from Gillette will restrict the cartridges you can use. The Fusion handle will only accept one of the two Fusion type cartridges, the manual or the power. The Pace 6 Plus handle will fit any of the Pace range, from the 3 to the 7. Gillette do offer a wider range of accessories and accoutrements, like balms and foams, all of which are fantastic.

There is not a doubt in my mind that the Gillette Fusion Power is a great product, but it seems to me that it is far outstripped by the Pace 6 plus. Now it might have seemed unfair to compare a six bladed razor to a 5 bladed razor, but 5 is the most blades that Gillette put on their builds, and neither of these are the flagship for either Dorco or Gillette.

Addendum – I shaved again with a new Fusion and while the lubricating strip did last all the way to the end, it was gone by the time I was done. I decided against the follow up shave because of this. Could be a bad pack of cartridges.