In his audition video, Marvin Phillip introduced himself while sitting on a football field. He told the audience that he had been drafted by the Pittsburgh Steelers in 2006. A few years afterward, Marvin, unfortunately, injured his back and ended his career as a player. He did not quit football entirely, opting instead to become a couch. Back pain still plagued him, so he was unable to do basic things that involved bending over, such as laundry. He said that he was looking for a product that would help him adapt, and was unable to find anything on the market. Instead, Marvin opted to create his design. The video showed him on his computer, taking orders. Marvin said that he was new to being an entrepreneur, but he was looking for a mentor in the Sharks. He stated that his product improved his life, and lifted his spirits. 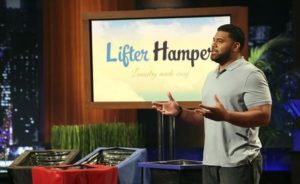 Marvin walked out onto the stage and introduced himself to the Sharks. He repeated his origin story and said that his laundry skills suffered along with his football skills on account of his injury. He bent over to get the laundry from the basket on the stage. He said that bending over to get that laundry basket and lifting the heavy loads was a pain in his back. Marvin stated that that was when he got the idea for his product, the Lifter Hamper. He explained the concept, saying that it was a spring loaded liner in a laundry hamper. It drops when clothes are added, and rises back up as clothes are taken out. This keeps it at a constant height for the user, allowing them to pick items off of the top of the hamper.

Marvin continued, stating that his idea was not just for injured NFL athletes, but for anyone who has difficulty bending over. He said that it’s also for the elderly, like Kevin, pregnant women, or anyone with back issues. Kevin smiled, as the other Sharks laughed. Marvin told the Sharks to take a load off, and let the Lifter Hamper do the work for them.

Lori asked if she could try it, and Marvin invited her up to the stage. Daymond asked if you were able to put an infinite amount of peanuts in the hamper for bar use. Marvin laughed. Lori began to remove clothing from the basket and asked if it was just going to keep coming up to the top. Marvin said that it would. Robert asked if it was working, and Lori confirmed that it was. Daymond asked what it was made of, and Lori said that she didn’t know, but it feels pretty cool. Robert asked Marvin if he gets the whole thing, and Marvin said that it did come with the frame and cover as well as the liner.

Mark examined the box as Robert asked Lori if she would buy it for her house. 4Lori said it was interesting, but wondered how he was going to get the hamper from the bedroom or closet to the laundry room. Kevin let her know that it had wheels as Marvin moved it around to demonstrate. Lori told him that the wheels did not appear to be working on the carpet, and asked him to move it to the wood floor, where it did move easier. She said that if you had to bring it from upstairs to downstairs, it would not be an easy transition. She stated that the design needs some perfecting.

Marvin said that that kind of advice is what he was looking for. He wanted someone to advise him on what the next step should be.Daymond asked him how long he’d been doing it, and Marvin told him six months. Daymond seemed impressed and said that he learned a pretty significant amount of the business in 6 months. Marvin stated that he was trying. Kevin let him know that the firm was not worth $700,000. He accused him of getting hit over the head a few too many times, or he had to have a lot in sales. Marvin said that they had not hit the market yet, and the Sharks laughed.

Marvin told them to wait before they judge, saying that he’d signed two contracts with rep firms. Marvin affirmed that and stated that he also had contracts with overstock.com and Amazon. He also had a deal with Costco but had to scale back since he could not meet production. Lori said that it was an agreement with the rep company that stated that they could maybe get him into those places. She stated that nothing is stating that it occurred already. Daymond asked if the rep companies were charging him upfront, but Marvin said that they charge a fee after he sells something.

Mark asked for the economics of the product, wanting to know what it cost to make them, and how much he’s selling it for, both on a wholesale and a retail basis. Marvin said that it costs $10 to make, and it retails for $99.99. Kevin asked if he had a patent on it, and Marvin told him that he just applied for his utility patent. Mark wondered how much he had invested, and Marvin told him $75,000. Robert asked him what the money went to, and Marvin said that it went towards the patent and design. Robert asked if it was a lot of money for him, and Marvin stated that yes, saying that not every player in the NFL is a millionaire, Robert told him that he did not mean any disrespect, he just wanted to understand his commitment level. Marvin said that it was his full-time job. He stated that Lifter Hamper meant a lot to him since he also suffered a back injury. He knew what the pain was like, and he benefited from his product.

Marvin continued, saying that he wanted to help people out Mark stated that he liked the concept, having hurt his own back while playing sports. Mark said that he does his laundry, and know what it’s like. He did not have the connections that Marvin needed to get the business off the ground. He went out. Robert said that it was an ingenious product, abut he has a long way to go with it. He told him to get out and sell the product himself. He went out. Marvin thanked him. Lori said that her heart was in the product, but her gut was telling her that he was only hald]fway there with the product. She stated that she was out right now with her money, but he could give her a call when he was there. Kevin declared that he was waiting to hear what Mrs. QVC would say since the product would fit with that selling platform. He indicated that he was surprised that Lori was not in. He did not think the product was worth investing in, and he wanted to be frugal with his investments. He went out.

Daymond said that he was rooting for him, but he called Marvin a Shark for offering 12 % of a company with not sales. He went out, stating that nice guys finish last. Marvin thanked them and walked out. Lori wished him luck, and Robert said that Daymond’s statement wasn’t true. He let him know that nice guys finish first all the time. Marvin said that not getting a deal in the tank made him feel like working harder to get his product out there on the market. He was willing to take the steps needed to make it a household name.

Lifter Hamper Now in 2018 – The After Shark Tank Update 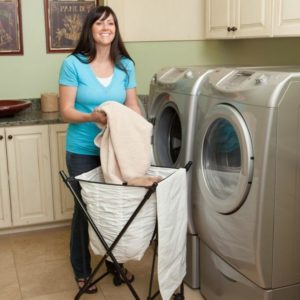 After appearing on Shark Tank, Marvin Phillip started a crowdfunding campaign for the Lifter Hamper on Indiegogo.com. Even though he lowered his valuation by asking for $25,000, he did not time the campaign with the debut of the episode. Even so, Marvin was able to net $10,000 for the Lifter Hamper, and he got the money. The pinned post on their Twitter page is a deal with Household Essentials from 2015. The Lifter Hamper is selling on Amazon for about half of the original retail price, and it has decent reviews. It looks like they are still plugging along despite not getting a deal on Shark Tank.