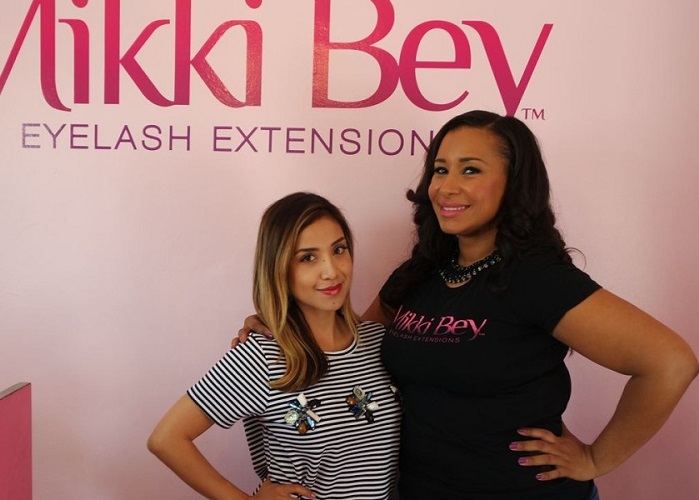 In the celebrity World of Hollywood there are an army of anonymous workers who ensure that your favorite celebrity always looks fantastic. Every time you see a star on the red carpet they’ve been dressed in the finest clothes, and they’ve had every tiny physical imperfection removed by a team of experts.

One of those experts is Mikki Bey, a make-up artist with a wealth of experience and contacts in Tinseltown. Her work could be seen on networks such as E!, MTV and VH1. She wrote a weekly beauty column for the online lifestyle magazine MadameNoire, and she had been selected by the Recording Academy to be a member of the exclusive Grammyglam squad, a group of leading experts in the beauty industry who report live on the annual Grammy awards.

Mikki, originally from Detroit, began her career as a producer for CBS, but she was frustrated by the lack of creativity in her corporate network career and eventually graduated into the World of celebrity make-up artists. She opened her own business in 2011, focusing on her speciality, eyelash extensions.

The Mikki Bey Eyelash Extensions salon, in Culver City, California focused on ordinary women who wanted to get professional eyelash extensions worthy of any Hollywood star, but in order to follow her dream of opening a Mikki Bey salon in every major city in America, she needed to raise hundreds of thousands of dollars in funding, and she also knew that a business expert would be able to make the process far easier. With that aim in mind she applied to appear on Shark Tank in mid 2015.

Mikki was introduced to Shark Tank viewers in October 2015, her segment began with a small at home segment with Mikki in her Salon, which she described as a ‘Barbie Dream-house’. She explained that she was hoping to expand her brand of beauty across the country, with the help of an investment from the sharks.

Mikki was seeking $300,000 in exchange for 20% of the Mikki Bey business, she entered the tank with two models and introduced herself to the sharks.

She began her pitch by asserting that the glamorous look common to all celebrities was fake. ‘You know it right?’ she asked the business moguls. She went on to explain that they too could look like a celebrity with her professional help.

‘Even men are getting in on the deal’ Mikki explained, and wondered aloud what Mr Wonderful would look like with Mikki Bey Eyelash Extensions. Kevin O’Leary sounded surprisingly enthusiastic about the idea, but Mikki had other ideas. She invited Mark Cuban to come on up and try out her service, and he too loved the idea. 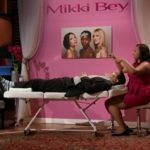 In a quick demonstration Mikki explained the unique process, and attached a single extension to one of Mark eyelashes, in a matter of seconds. Barbara Corcoran asked how the Sharks could see the full effect, and Mikki revealed that the models that accompanied her where there to demonstrate the before and after effect of the extensions.

Kevin O’Leary couldn’t see anything unique about the process, but Mikki explained that her own technique was the unique part. She was able to cut the application time of the extensions in half, and it was that technique that she wanted to patent.

Robert Herjavec wanted more details, ‘How can you do it in half the time?’ he asked, but Mikki wasn’t going to be giving away her secrets so easily. She told Robert that she couldn’t tell him the exact nature of the technique, and Lori agreed, clearly understanding Mikki’s reluctance to give any more details away.

Kevin wasn’t as understanding of his fellow shark, he told Mikki that her valuation of $1.5 million must be based on something, and pushed for more information about exactly what made the company worth such a large amount of money, ‘What do you do? What?’ he asked.

Mikki ran though the details of her unique process again, but Kevin was still unable to see any real proprietary value to her business or technique. Mikki ran through her revenue from the last three years, detailing modestly increasing profits year on year, with $130,000 being made in the previous year. Kevin admitted that there was nothing wrong with the business, but again insisted there was nothing unique or proprietary about it. Mikki showed plenty of confidence as she refused to concede that Mr Wonderful was right, but Kevin was clearly a long way from being convinced, even though he appeared to admire Mikki’s confidence.

Robert inquired what Mikki was planning to do with any investment she got from the tank. She outlined her strategy of seeking a patent for her process, and licensing it out to other beauty salons across the country. She revealed that she also wanted to train more staff to increase her own salons potential for profits.

Kevin O’Leary told the entrepreneur that her business was not a suitable investment. He dropped out and also predicted that Mikki wasn’t going to get a deal from his fellow sharks, ‘And I’m never wrong’ he added ominously.

Mikki made an emotional and passionate plea to the remaining sharks, but she became overcome with emotion. She asserted tearfully that the Mikki Bey business was her destiny, and she would not stop until had succeeded in growing the business into a nationwide brand. But the sharks looked concerned at the entrepreneurs sudden loss of control.

Barbara Corcoran asserted that Mikki’s business was a service, not a business. She believed that Mikki lacked the skills to motivate others, and was unlikely to see her business grow in the way she envisaged, and with that, Barbara dropped out.

Lori Greiner told Mikki that her passion would eventually see her achieve the success she was looking for, but she also couldn’t see what there was for her to invest in, and for that reason Lori dropped out of the negotiations too.

Mark Cuban admired Mikki’s successes so far, and her passion for the business, but asserted that he couldn’t add value to the business. He told Mikki that she didn’t need him, although she didn’t look as if she agreed, but Mark was not going to make an offer and dropped out too.

Robert Herjavec believed that the Mikki Bey business was making good money, but it wasn’t a scalable business in his eyes. A string of salons would only increase administration and logistical costs, and ultimately reduce profits overall, and with that Robert was out.

Barbara Corcoran spoke kindly to Mikki, but she had been discouraged by her sudden show of emotion. She told the eyelash entrepreneur to ‘Give up the crying’, and asserted that a woman crying was giving up power, and it was never an appropriate action in a business environment.

‘Don’t cry for money, It never cries for you’ called Kevin, as Mikki left the tank.

Barbara Corcoran’s comments to Mikki on the show drew a fair amount of attention, and some criticism, from viewers and critics alike. Barbara stuck by her opinion that crying had diminished Mikki in her eyes, and fellow shark Kevin O’Leary agreed, tweeting his parting shot from the tank, ‘Don’t cry for money, it never cries for you’, but Mikki was keen to defend herself.

In an interview a few weeks after the segment was first aired Mikki asserted that Barbara’s opinion was wrong, crying didn’t give away power, it was what made people human, not just female. She referred to Facebook COO, Sheryl Sandberg, who had openly admitted to crying at work, and also mentioned Hillary Clinton becoming emotional while discussing gun control. Mikki also revealed another factor that she had kept to herself, the filming of her segment took place on the anniversary of her father’s death, and that combined with the pressure from the sharks had overwhelmed her temporarily, but she insisted that judging a women based on whether she is able to control her tear ducts was ‘Preposterous’.

Upon reflection, Mikki’s actions on the tank have not tarnished her image or business in the least, while Barbara Corcoran has come to be seen as the cold-blooded one, but then again, she is a shark, what else would you expect from a tough business mogul?

Mikki’s business has continued to grow since the segment was first aired, she has taken on additional staff, and although she still only has one location, there is another highly profitable income stream that seems to be gaining a lot of attention.

Mikki has become increasingly involved in teaching others how to become eyelash experts, and holds regular certification classes, in a variety of cities. The course lasts just two days and promises to prepare attendees with all the skills and materials they need to begin making money for themselves within 48 hours. Although I could find no details regarding how many students attend each two day course, there wouldn’t need be too many to make it worth Mikki’s while. The cost of the course is $600, and the amount of interest that Mikki appears to receive about the courses suggests that the hefty price is putting very few people off.

Unsurprisingly, Mikki is still full of the same confidence and passion she demonstrated so well in the tank, she says she plans to continue building her brand until it becomes a globally recognized beauty brand. Never one to give up, she asserts ‘I have learned to go with the tide, not against it. I will be in this business until that tide changes.’