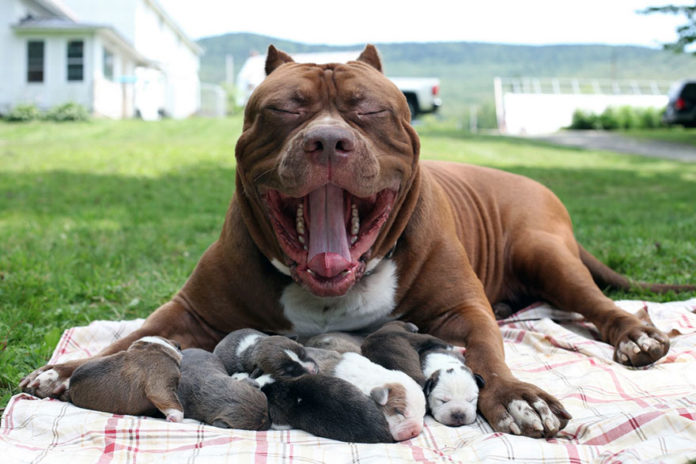 Hulk makes his puppies look very very small when he stands next to them but they could reach a similar size in a few years. The puppies could be worth up to $100,000 when they reach that size and are currently being trained as guard dogs.

The value of the dogs will increase if they complete the training school for guard dogs. Hulk and the puppies live with Marlon and Lisa Grennan, who have a training school for security dogs in New Hampshire. They have eight puppies and they are worth around $500,000 together.

One of the puppies being trained in the school is named Kobe, who is very small compared to Hulk but could reach his size in the next few years. Mr. Grennan said his reputation is built on how he breeds and trains his dogs and that he is looking for the next Hulk, who is currently the biggest pit bull in the world. He also said Kobe is a wonderful dog and that he has great energy and balance.

The Grennans own a training school where dogs are trained to protect their owners. The training school provides dogs to celebrities around the world that want protection. The business has also provided dogs to police.

The eight puppies could be sold for half a million dollars soon but Mr. Grennan plans to keep Kobe. He says Kobe is priceless to him and that he has no intentions of selling him. He also said that he’s already received a few offers for the puppy, even before he started training. Mr. Grennan says he has already been offered $40,000 for the dog. Kobe is currently being trained and is still very small compared to Hulk but when the training is complete, he could be worth up to $100,000.

The $100,000 price doesn’t make him the world’s most expensive dog as other rare dogs have sold for more than a million dollars but it does make him one of the most expensive pit bulls in the world. Hulk’s puppies usually sell for $30,000 but when trained, they could sell for more than $50,000. Hulk is also worth around $500,000 because of his size and training.