SBU- What Happened After Shark Tank

The SBU, or Self Balancing Unicycle was invented by Daniel Wood in his garage from spare parts of other unicycles in 2007. In 2011, his former coworker from U.S. Digital in Vancouver, Washington joined him, and helped him promote the business on Shark Tank. Let’s take a look at how they do. 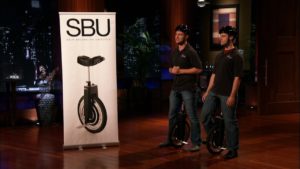 Daniel Wood and David Martschinske came out onto the stage, and into the Shark Tank. Both were riding what looked like unicycles. Each had on a black helmet, as well as matching black t-shirts. They circled in front of the sharks, as all of them laughed. Finally, they made their way to the stage. Daniel and David high fived, and then started their presentation. David explained that their product was the only SBU or self-balancing unicycle on the market. The unicycle is also electronic. SBU Is requesting $300,000 in exchange for 10% of their company.

Daniel then went on to explain how the unicycle worked. He launched into a list of all the technology that the unicycle used to keep upright, and move. The Sharks looked both overwhelmed and bored. Only Mark Cuban looked excited. David told them not to worry – he speaks nerd and can translate. David explained that the SBU has “smart sensors” inside of it that keep the rider balanced, similar to the Segway. Daniel got on his unicycle again to show them how it worked. David explained that pedaling a regular unicycle ‘s hard – it’s hard to keep upright, and balanced. But the SBU doesn’t require any pedaling, which makes balancing a lot easier. David continued, stating that the SBU was “intuitive” to the rider’s movements, making it easy. As Daniel collapsed the unicycle, David let the Sharks know that it was portable enough to store it under your desk at work. You could be the coolest guy at the office by riding in on a unicycle. David said that if the Sharks were like Daniel, they could also program a graphing calculator. Daniel laughed nerdily, which made the Sharks laugh in turn. Robert told Daniel that he had a nerdy laugh.

David told the Sharks that the SBU was capable of going up to 15 miles an hour, and it can go an impressive 10 miles on a single charge. He asked the Sharks who was ready to “ride nerdy” with them. Mark laughed at that, and Robert asked if he could come up and try the unicycle. Robert put his helmet on he got a tutorial on how to use the device. David told him to lean forward to get more speed, and lean back to slow the unicycle down. David and Daniel stayed on either side of him to support him as he tried it out. Robert went a little faster and looked shaky. He said that he had to get the hang of it. Daniel stated that it takes about 20 minutes to learn actually, preferably in a large parking lot with lots of open space. After observing all of this, Kevin got up and said that he had to try it. Robert handed him the helmet and stated that it was a lot harder than he thought it would be, with all his early years in the circus.

Kevin had his turn on the unicycle, again with the two entrepreneurs on either side as a support system. Robert yelled out for Daniel and David to drop them. Kevin said that the whole thing was very cool, and he turned on it. He asked the pair how much the unicycle was because he wanted one. Daniel told him $1,800, but he could get it for free if he agreed to make a deal. Kevin said that he thinks that he could get the hang of the unicycle as he walked back to his seat. Daymond asked how long they have been selling SBU. Daniel said that they just finished out their overseas factory, which produced 100 units the week that they shot their Shark Tank episode. All 100 units were already sold. Mark wanted to know what the cost was to them, and Daniel answered $350,000. Robert asked Daniel if he knew what happened to one of the founders of the Segway, and Daniel responded that he had an accident. Robert told him that he fell off the Segway, fell into the river, and drowned. Lori looked shocked. Robert asked the pair why the Segway was not a commercial success. David told him that the Segway was truly overhyped. He continued, stating that he wasn’t going to talk badly about the Segway, butt it wasn’t portable or convenient. Kevin told the two that the subway had failed when it was banned from the sidewalk. Kevin continued asking if They had that issue covered, or talk to anyone in City Hall about laws concerning this motorized unicycle. Mark said he felt like the SBU would not be as much of a problem as the Segway since it was a single wheel and much smaller.

Daniel alarmed the Sharks by telling them that they had been stopped by many police officers, but continued saying that the officers loved the product and wanted to know where they could find one. Lori told the pair that she needed to feel passionate about any business that she was investing in. She told them that she loved them and their personalities, but she did not feel excited about the motorized unicycle. She went out. Daymond’s said that he was interested in a second, but was unaware that the Segway is business model did not work. Kevin confirmed that they had horrible, sales. Robert said that the Segway model was one of the biggest ones regarding the loss of investment. Daymond told the pair of entrepreneurs that he was not willing to take the risk, and he went out. David’s mouth was open in shock, but he nodded. Kevin told the pair that he conflicted. It was a hard decision for him because he likes the product and sells the merits of it. However, he did not think it was worth the 3 million dollars that they valued it at.

David looked lost for a moment, but he regrouped. He said he wanted to tell Kevin about their future sales. He said it was a conservative estimate that they would sell 1000 of these motorized unicycles in a year.That would let them a profit of A million dollars. Kevin seemed incredulous. Yes them if they could do a million dollars in profit in the next 12 months. David assured him that they could. Mark wanted to know how they could guarantee quality assurance when they did all their manufacturing overseas. He told them that if they were any production issues that all, their entire business was toast. Daniel said that they had been to the factory, and there are no issues. But Mark informed him that that was not good enough. He said that the assurances were very different than the man producing the product correctly and on time. Lori smiled knowingly. Mark continued saying that Apple had had very similar problems. Mark stated that SBU Had a brilliant design, but he did not like trusting overseas manufacturers. He went out.

Robert was up next, saying that if they wanted a three-million-dollar investment he had to believe in the mass transport Market. He is seeing other people fail in a similar market, and that made him wary of the risk. It sounded like he was about to go out, but Daniel stops him. Daniel said that the motorized unicycle had the most sophisticated bike controller on the market. He designed the whole thing himself, And much of the technology involved was proprietary to them. Robert said that he didn’t realize that they had patents filed on their design. They probably should have mentioned that sooner, and maybe the other sharks would have stayed in. Lori did not look too impressed, though since the patents were only filed and not complete. Daniel continues to comment saying that other bike manufacturers wanted to license the technology that they had. He stated that they already licensed some of it. They were already receiving royalties from it.

Daymond’s looked interested again. He asked them how much they had in fees, and how long they have been doing it. David told him that they’d received $25,000 in fees in the last three months. Robert said that that model was incredibly impressive and that they had something there. Robert stated that he would be happy to invest, but not out of 3 million dollar value. He offered them $300,000 in exchange for 33% of the business. The two looked unhappy with their new valuation until Kevin butted in. He said that he would be happy to join with Robert and that deal. Kevin continued, saying that he had just spent $5,000 on an electric bike and he thought that the market for electronic things like that would be huge. David tested the pairs luck, asking if there are any other offers. Mark looked amused. Daymond told a couple that they were doing a very dangerous Balancing Act. They already had two sharks that are interested, when all of them were about to be out. Would they be sacrificing a deal just to get more money?

Daymond told them not to waste much more time. Kevin nodded in agreement. The Sharks watched as David and Daniel please their helmets back on their heads. They said that they were into the deal. Kevin and Robert went up to shake their hands. Kevin told them that the technology was going to make millions. Daniel and David cycled off the stage. in their exit interview, Daniel said that they had made a deal with two the biggest nerds on the Shark Tank. David optimistically stated that they are going to put a motorized unicycle in every cubicle in America. So how did they do after Shark Tank? Let’s take a look. 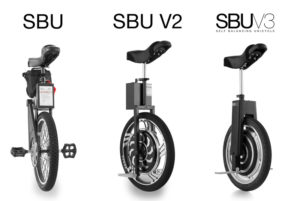 After their episode on the Shark Tank, SBU saw saw much success that they were having trouble getting all their orders shipping out in time. Since then, they added two new versions of the SBU to their product line. The unicycle was featured on popular shows such as Mythbusters and Tosh.o
According to their website, they have dealers all over the world, including in the UK, Switzerland, and Australia. Unfortunately, you cannot buy your own SBU on their website, or on Amazon – the links are broken. Their social media pages have been sitting untouched since September of 2015. It seems like Robert was correct about the marketing problems for this type of device.