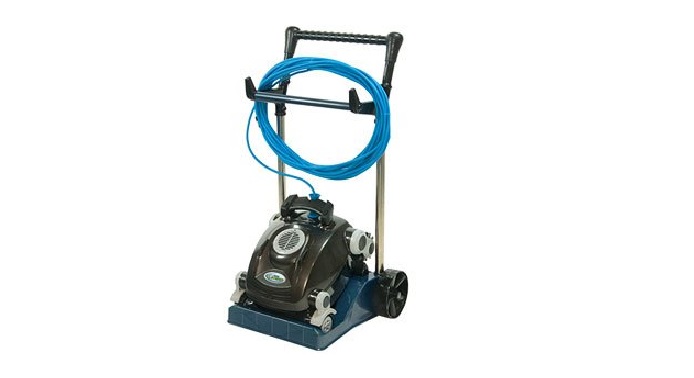 We have come to the end of a long road. Here it is, the final robotic pool cleaner review. I have been researching, viewing and testing these things for months, and in that time I feel I have become quite familiar with the ins and outs of not only the bots themselves, but the companies who make them. Aquabot provide great bots in the high end and low end. Dolphin’s range is filled with mid range bots that are low on price and filled with features. Hayward offer some of the finest consumer options on their bots, even if the range is a little small. Smartpool’s are sturdy and low cost. The Climber Pro is one of their better bots.

Take the lower end bots from Smartpool, keep the same price range intact and add in the ability to climb, and a few accessories, and you have probably their second most cost effective product. I am a fan of this one, and it is nice to be able to end on a positive note. There are a few issues with the build, but that is always the case with legacy design bots. None of them should be deal breakers.

Smartpool’s wheelhouse is their ability to craft low cost bots, that while light on features tend to make up for it in terms of build quality. All their bots are fit flush, and up to taking a bit of a beating. There are numerous reports of cleaners still working years after being put to use. The average life span of a robotic pool cleaner is around 5 years, while the average for Smartpool is a little longer, at 6+ years. The Climber Pro is up to the usual standard. There are two things to think about before you buy a bot. The first thing you have to verify is the quality of the warranty. The Second thing is, when you get your new bot, give it a shake. if you hear rattle then it is likely you have a factory fault, and you’ll want to make use of that warranty.

As to the look of the bot, well, you can’t win all of them. Smartpool’s bots never look great. All the aesthetics designers must be somewhere else. The Blue plastic finish isn’t bad, and the overall look of the bot at least matches the rough and ready nature of the build itself, but it is still not much to write home about.

I realize that the look of a build is not that important, but it can become a deciding factor when you are stuck between a few similarly featured bots. Bear it in mind then. Overall, this is up to Smartpool’s usual standard.

The last few months have been a blast. researching robots, figuring out the reasons for certain features being in some builds and not others, and watching them all clean pools. In that time I have come up with a set of simple features that, without which, a cleaner can be written off immediately. They are as follows. A bot must be able to clean the pool floor well, and that includes brushes powerful enough to break up debris or various sizes. It must be able to filter the water well within a single cycle, and it must be able to climb walls. It is shocking to me that so many bots fail at that last one. I mean, what is the point in buying a bot to free up your pool cleaning time if you still have to clean a section of the pool? The Climber Pro, as the name implies, handles walls with ease.

The Climber Pro is an older cleaner. it comes with a few ease of use issues, but the core functionality is still as good now as the day it was released. The bot is built for in ground pool only, I have several reviews of above ground pool cleaners, but I suggest to stick with Aquabot there, they have the widest range of above ground climbers on the market. The 50 ‘ cable that cos with the Climber Pro is a swivel cable, which is always nice to see. If you have owned a non swivel cable bot in the past you will know that a tangled line is the number one cause of cycle stoppages, annoying, time consuming and they cost you money.

The cycle time averages at around 3 hours, which isn’t bad for a bot that cleans walls. In addition to the 3 hour standard cycle, the Climber Pro comes with a 1 hour speed clean mode.  The bottom mounted brushes are the usual Smartpool high power brushes, able to break up all kinds of debris, while the bristles are a little softer, so as not to scour the pool floor. The suction ports are wider than I usually see in a robotic pool cleaner. It does lead to slightly less powerful suction, but compensates by being able to pick up larger objects, like acorns and twigs, the number two cause of cycle stops.

The climbing feature is one of the most impressive parts of the build. In this price range it is rare to see a bot make tat 90 degree transition to the pool floor, though many claim to be able to climb a smooth transition floor to pool. Not many other features here to talk about. There is a rapid drain system, that detects when it is coming out of the pool and vents the held water, which goes a long way to making removing it from the pool as easy as possible.

Overall, while this might not look too impressive, it has al the core features you will need. I might have liked to see a full bag indicator, but I don’t consider it a major issue. The bot becomes more impressive when we get to the pricing section.

Smartpool Climber Pro Ease of Use

I specialize in easy to use, all in one robotic pool cleaners. But there is another type out there. The more industrial external pump systems. They require a lot of technical skill to install, and for residential pools they offer very little for all the added effort. I say it is better to stick to the internal pump systems. Their pumps are plenty powerful enough for day to day use. But the all in one models can be broken down again into two more broad categories. What I call the Legacy Design builds and the Ultra Moderns.

I mentioned that the Climber Pro is an older model, so it falls into the legacy design mold. They are not inherently inferior at their core, but they come with a few day to day running issues that cannot be left out. Mostly they are with regards to the filter bag and chamber. The Filter chamber on the Climber Pro is fitted to the bottom of the bot. Meaning you have to flip the whole thing over if you want to change the filter bag. This is a fairly light weight build, but it is still an unnecessary chore. The use of a filter bag system is troublesome as well. They are more prone to user error, an improperly folder filter bag can cause cycle stoppages, here we are at the number three cause, so please be careful when replacing the bag.

The final issues usually revolve around the weight of the bot. But that is not a problem here. The Climber Pro is a little under 13 pounds, not to heavy, and it comes with a caddy, so moving it around is simple. In addition, the handle, while short, can extend, and when you are taking it out of the water it will vent held liquid, making it a little easier to get out.

I realize that some of the issues I talk about here might seem a little small, but robotic pool cleaners are focused on end user experience, so there really is very seldom anything huge to talk about here. The Climber Pro might have legacy design issues, but so too do most of the Smartpool bots, but they also have weight problems. The caddy that comes with this build goes a long way to alleviate those problems.

This is the most important section for the Climber Pro. The Climber Pro is a slight upgrade over the Climber, it adds a slightly better brain and a caddy and I have found that it falls into the same price category as the Climber, the $350 to $550 price range. This is astounding, there is almost no reason to get the vanilla model, unless you find it very cheap second hand.

You also have to consider the running costs. This will vary from place ton place, as the price per kilowatt hour fluctuates. Be sure to look up what you are paying per hour for power. The Aquabot line is the only line of bots where I was able to go into detail, as they released the full power consumption information for their robots. I have been forced to assume a 180 W power draw for the Climber Pro. Factoring that into a few common power prices and we get close to 10c per cycle, maybe a little more in some areas.

If we disregard the ambiguity of the warranty, the Climber Pro is probably the second best bot to come out of Smartpool. The BigFoot is still my favorite, but the price is a little out of most folk’s ranges. The Climber Pro manages to do everything I would want, and do so quickly at low cost, all for under $500 in some places. No bells and whistles, and it is not the most advance model in the world, but it should be more than up to the task of you backyard pool. Very easy to recommend this one, and if you are in the market for a new cleaner, you must consider this one carefully.