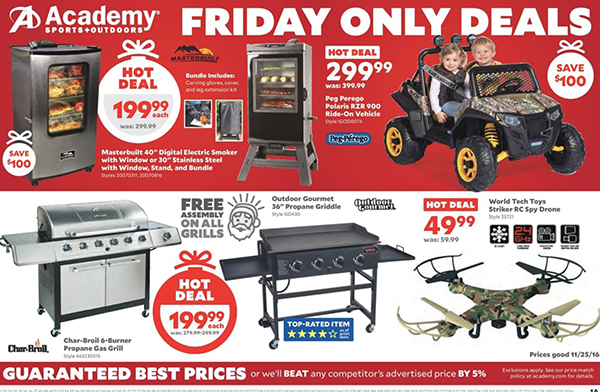 Originally founded in the late 1930’s in Houston, Texas, Academy Sports + Outdoors started out as an army and navy surplus chain prior to being purchase by a San Antonio attorney named Arthur Gochman. Rebranding the small company to “Academy Corp,” he opened the first physical store across the now-defunct San Antonio School, where he sold many surplus goods from the pre-World War II period. Continuing to expand the company over the next few decades, the business later adopted an “Everyday Low Price” philosophy in the mid 1980’s to attract more customers. Since then, the privately held company has thickened their operations to include over 200 stores across the United States. One of the most popular sports goods discount chains in the country, they currently sell a wide variety of sporting merchandise including camping gear, fishing gear, hunting gear as well as sportswear. At present, they gross an estimated annual amount of $2.7 billion from sales.

Known for being a discount sporting chain, Academy Sports + Outdoors offers a huge range of products for more than affordable prices. Similar to the preceding years, the company will once again be participating in the annual 2016 Black Friday Event this upcoming Thanksgiving weekend. Whether you’d like to replace your home barbecue grill or snag a new pair of runners, Academy Sports + Outdoors has close to 300 different deals waiting for you at their store. Guaranteed to have the best possible prices, they’re even offering to beat any of their competitor’s price by 5%! Many of their hot buys will only be available while supplies lastーso you better mark your calendars and hurry to one of their locations this forthcoming Black Friday. All the way until November 28th, 2016, Academy Sports + Outdoors will also be holding a Ring in the Season Sweepstakes, where you can enter daily for a chance to win a $50 gift cardーevery entry also qualifies you for an opportunity to win the grand prize of a $1500 gift card!

From professional firearms to extra large dog kennelsーAcademy Sports + Outdoors has got it all. They will be putting forth their best prices for hundreds of different items from trampolines, to baby strollers, to ride-on firetrucks. Whether you’re shopping for yourself or others this Thanksgiving weekend, chances are you’ll find at least a few items that will capture your eyeーthere’s no better time to do some shopping than on Black Friday! To help you out with your shopping, we’ve compiled a list of some of the best items that Academy Sports + Outdoor has to offer this Novemberーso hang tight, and read on. Obviously, there’s no way that we can mention all of their items (there are just too many great discounts), so these will only be a few major highlights.

Let your little ones go for a ride with the all-new Polaris RZR Ranger Vehicle. Featuring foot pedals with automatic brakes, driving around the backyard has never been funner. Comes with a 2 speed shifter that allows your kids to drive up to 5mph on hard, or grass surfaces. Fitted with a 12 volt rechargeable battery. Suitable for children ages 3 to 8 years old.

Push yourself to your exercising limits with the ProForm ZT6A Treadmill. Pre-set with 18 individual workouts, it also features a water bottle holder, a reading rack and a Coolaire workout fan for your convenience. Fitted with a 5 inch backlit display, the machine also comes with an EKG grip pulse heart rate monitor so that you can monitor your progress and stay within your target zone.

Designed to have a compact and easy to assemble frame, the Adidas Rack and Bench Combo is perfect for those who are looking to workout in the comfort of their own home. Fitted with a thick foam-padded seat, training your upper and lower body is now both comfortable and convenient. Can withstand up to 300 pounds.

Take your little one onto the streets safely and stylishly with the Bob Revolution Flex Stroller. Ultra-padded for maximal seating comfort, it also features an 9 position adjustable handlebar that’s customizable to the height of any parent. Lightweight and foldableーit’s convenient for both storage and transport. Utilizes a state-of-the-art suspension system to provide a smooth ride.

Give yourself a variety of workouts with the Schwinn 230 Recumbent Exercise Bike. With a dual-track LCD window system, you can easily monitor up to 13 different feedback displays. Featuring two user settings, it also boasts 22 built-in programs to keep you challenged and motivated. Comes with 20 levels of resistance and a high-speed, high-inertia, weighted fly wheel.

Fry the perfect turkey safely and conveniently with the Butterball Indoor Electric Fryer can hold up to 2 gallons of water for a 14 pound turkey. Featuring a digital timer and analogue settings, controlling the thermostat temperature is extremely straight forward. Tested to meet commercial standards. With its porcelain-coated inner pot, it also uses up to 33% less oil than traditional fryers.

Easy-to-use for both professional or beginners, the Masterbuilt Digital Electric Smoker creates perfectly cooked meats without the hassle of propane or charcoal. Not only does it have a removable drip pan that makes clean up easy, but it is also fitted with a built-in handle and wheels for easy transport. Equipped with four chrome-coated racks, it can smoke up to 100 pounds of food at one time.

Play a quick game in your backyard or driveway with this Portable Spalding Basketball System. Boasting a heavy-duty steel frame and a polycarbonate backboard, it also features a Pro Glide system which allows players to adjust the height of the rim upwards to 10′. Stabilized with a 37 gallon base, it sports a red slam jam rim and a standard white net.

Give yourself some exercise motivation with the Fitbit Charge 2 Activity Tracker. Not only is it capable of automatically tracking your all-day activity and steps, but it is also able to track your sleep patterns and heart rate. Sync-able to most smartphone devices, you can even receive notifications on its interactive OLED display screen. Available in a a number of band colors.

Cruise around the neighbourhood with the Razor Hovertrax 2.0 Hoverboard. Featuring EverBalance technology, it provides its riders with a smooth ride every time with its self-balancing design. Usable for up to 60 minutes with a single charge, it can go up to 8mph at cruising speed. Comes complete with eye-catching blue LED light bars.

Take a peek at the underwater environment beneath you with the Lowrance Hook-5 Bundle. Equipped with a built-in GPS antenna and several navigation features, it uses some of the most advanced fish finder technologies to provide you with the best possible view underneath the waters. Fitted with a 5 inch color display for easy viewing of page layouts.

Capture high-definition footage of your everyday adventures with the GoPro Hero 4 Session Camera Bundle. Fully waterproof to 33′, you can continue recording away even in the wettest of conditions. Bluetooth and Wi-Fi compatible, you can easily access your media wirelessly or playback your photos and videos via the GoPro app. Includes a 16GB microSD card.

Catch the biggest fish with the H2O Xpress Motive Low Baitcast Reel. Engineered specifically for right-handed users, it features 10 individual bearings for a smooth performance. Reinforced with a one-piece aluminum alloy frame, its carbon sides also offer both durability and power. A low-profile design, it comes with an anti-reverse reel and a 7.1:1 gear ratio for quick retrieves.

Featuring a lightweight barrel, the DPMS Sportical 5.56 NATO AR-15 Semiautomatic Rifle comes with an A2 pistol grip and an adjustable Pardus-stock. Slick-sided with a low profile upper, it has a railed gas-block front sight that is equipped with an optics ready rear sight. Capable of 30 rounds, Made in the USA.

Bikes and other Rideables:

Speed off with your friends with the Pulse Kids’ Reverb Electric Scooter. Boasting Push-To-Go technology, the electronic action starts as soon as the rider pushes off with their feet. With 100 Watts of power and a 24 Volt rechargeable battery system, it can go up to 10mph for up to 40 minutes at a time. Recommended for children aged 8 and over, up to 120 pounds.

Navigate around town with the Magna Silver Canyon 26″ 18-Speed Bicycle. Featuring allow rims, it offers a smooth riding experience no matter if you’re on uneven or smooth surfaces. Comfortable with its adjustable foam-padded saddle seat, it even comes with a front shock fork and suspension system that helps to soften the impact of rougher terrain.

Your kids will love riding on the Ozone 500 Majestic Bicycle. In addition to its fun graphics and streamers, it also boasts a heavy-duty BMX frame and fork for maximum durability. Comes with a comfy, foam-padded seat that is adjustable to the height of your child. Features both rear-coast brakes and front calliper brakes.

Go for some fun three wheel action with the Huffy Boys’ Triwheel Green Machine. With stylish green and black accents, it features a dual-stick steering system that is capable of performing amazing 180 degree spins. Equipped with a trigger hand brake for quick and easy stops, it also comes with an adjustable bucket seat for a supportive and secure fit.

Let your little one go on an adventure with the Surge Camo Quad Electric Ride-On. Featuring a working horn and ATV-style tires, it also comes with light-up front fog lights for a more realistic experience. Capable of operating forwards and in reverse, it can accelerate up to 2.5mph. Powered by a 12 volt battery that can run up to 45 minutes. Designed for those ages 3 to 8.

If any of the above items caught your attention, do know that there are hundreds of other deals listed on Academy Sports + Outdoors’ 2016 Black Friday ads. Besides the products which we’ve mentioned, they will also be slashing the prices of casual footwear, hunting wear, clothing, undergarmentsー and so much more. Even if you’re not a regular customer at Academy Sports + Outdoors, their Black Friday deals are just too good to pass upーsurely there’d be some items that you’d be interested in. Anyhow, regardless whether or not you’re in the market for new sporting equipment, it’s a good idea to check out their 20+ Black Friday ad scans anywayーjust in case there’s something worth snagging.

When does Academy Sports + Outdoors open for Black Friday?

Although Academy Sports + Outdoors will be closed on Thanksgiving Day (Thursday, November 24th, 2016), they will be opening at 5AM the next day on friday, November 25th, 2016 until 11PM. However having said that, if you’d like to do your Black Friday shopping early, you can do so through their official website at academy.com.

Academy Sports + Outdoors will be opening their doors on Friday, November 25th, 2016 at 5AM and will remain open until 11PM. They will then re-open on Saturday, November 26th, 2016 at 8AM until 11PM at night. Their Black Friday Deals will be running exclusively over those two days.

Can you shop online or is it in-store online?

Academy Sports + Outdoors will be launching both online and in-store deals this Black Friday.

Committed to customer satisfaction, Academy Sports + Outdoors will gladly offer you a full refund or exchange on most products. If accompanied by the original receipt, a refund of the purchase price will be given. If no receipt is present, a refund may be given via the original form of payment or in the form of merchandise credit, depending on the item. For more details, please view their Return Policy on their official website.

If you’d like to flip through Academy Sports + Outdoors’ 2016 Black Friday ad scans, you can do so by clicking on the image preview below: