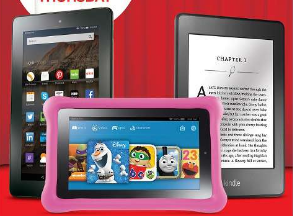 Expensive electronics have been a staple of Black Friday shoppers for years now, and this year will be no different. Tablets are no longer the hot new item on the list, but they are getting ever more popular – and cheaper every year. While physical size can still fluctuate from 7″ to almost 13″, the technology itself is getting ever better and stronger.

In this day and age, tablets are not just a screen that you can do a little bit of work on or some minor internet searching. Tablets often come as a laptop deal – the user interface of a tablet with the computing power of the fairly decent laptop (mind, you aren’t going to be playing any awesome video games on these – they aren’t that strong).

Target is coming in strong with some fantastic tablet deals this year.

Tech giant Best Buy is doing well for itself this year too.

Walmart has a few deals this year that are worth looking into.

If you are in the market for a new tablet, there are loads of choices from a plethora of stores. There are more than are on this list, but they the same products for the around the same price. So whatever you are looking for, you’re sure to find something this year.