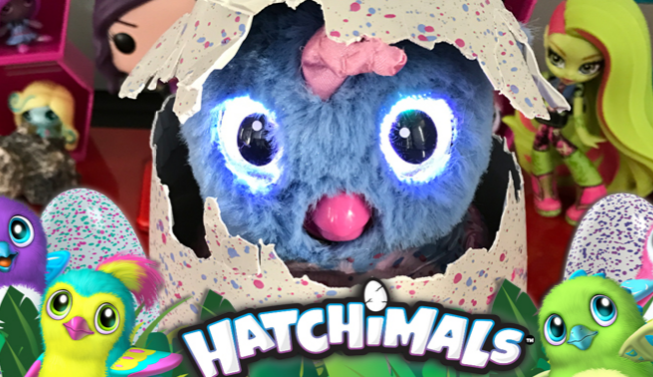 Hatchimals are the newest toy craze and one of the hottest commodities for Christmas and as you can probably guess sold out at a lot of places. There is always at least one toy craze every Christmas, with prior years being items like the Furby, Tickle Me Elmo, and Zhu Zhu Pets. Just like with those toys, the Hatchimal is almost impossible to find right now, with many stores selling out of them back in October or early November. You might not have heard about Hatchimals before, but if you have children then this is probably going to be an item that they are going to ask for. We thought we would give you a rundown of what a Hatchimal is and where you can find one both online and in-store this Christmas season.

Hatchimals are a small stuffed animal that is interactive, and it comes packaged in an egg that opens up. The appearance of the egg and the stuffed animal actually make it a little similar to the electronic toy of years past known as the Tamagotchi. Except in this case, a Hatchimal is a nice-sized stuffed animal that come in different species. The species you can buy are Pengualas, Burtles, Owlicorns, Bearakeet, and Draggles. Some of these species are sold at specific stores, such as the Owlicorn being available only at stores like Target, Wal-Mart, and Toys R Us. Each Hatchimal comes in a different color and design, with the species themselves even having variation in color. 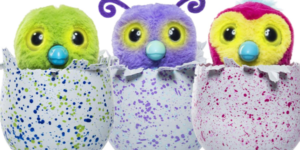 The interactive stuffed animal gets the name Hatchimals because the stuffed animal comes inside of an egg. This egg is speckled and you need to play with the egg in order to get the animal to hatch out of the egg. You can begin noticing the animal peeking out of the egg once you have played with it for 30 minutes, which includes things like rubbing the outside of the egg. Of course, if you want the Hatchimal to completely come out of the egg shell, it will take a lot longer than 30 minutes of playtime. You know you are beginning the hatching process when the eggs begins to glow, which is a sign that the Hatchimal is about ready to be born.

The fact that you are able to hatch your own stuffed animal is what is really drawing children to this toy. The idea of having an egg and a stuffed animal inside that will slowly hatch as you play with the egg is a concept that has not previously been done before. The new idea and creativeness of the Hatchimals might be why it is turning into the hottest toy get of the season. The Hatchimal will also talk, dance, play games like tag, and walk. All of the things that the Hatchimal can do have to be taught it from your child, so this is about nurturing a creature from birth through the formative years that allow it to talk and dance.

You can think of a Hatchimal like a Furby, in the way that it can talk and interact, but it is much more than a Furby in terms of what it can do and how it plays games. Even the cost of a Hatchimal is similar to that of what the Furby was, with prices being between $50 and $60, although you can end up paying a lot more than that if you go through online auction websites like Ebay.

Where to Buy Hatchimals Online & In Store

Amazon – Amazon is one place where you can buy Hatchimals for Christmas, although they are often sold out within minutes of being restocked. The good thing about Amazon is that you can be notified when the item comes back in stock, either through email or text alerts. You have to be ready though to purchase Hatchimals when it is restocked because it will be sold out within minutes. You want to be wary of third-party sellers though because they are running up the prices on this hard-to-find toy, often charging $300 for one!

To check out all the Hatchimals currently available at Amazon.com you can click here!

Toys R Us- You can find Hatchimals in store at Toys R Us in limited locations, although most places are selling out as fast as they come in. Even online at the website they are selling out within minutes of coming into stock, but you can refresh the website and sometimes get lucky. You can be notified if you go to Toys R Us website and it will send you an email when they are restocked, but at this point, it is a toy that is very limited in in-store supply. You can also check store availability near you and sometimes another store will have it while the one closest to you is sold out. 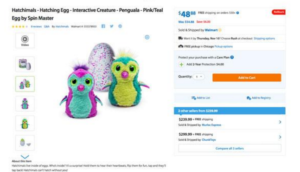 Wal-Mart- You can check both online and in-store at Wal-Mart, although again it is a situation where they are sold out within minutes or hours after being stocked. The best thing to do is sign up for the notifications when this product will be available, and then you will get an email when your store has this item in stock again. You can also call around to various Wal-Mart locations near you because it is possible a store an hour away has some while the store in your neighborhood is sold out. At this point it is just all about luck and being in the right store at the right time when they come in on the truck.

Target– Target also has some of the Hatchimals available, but only a few species are exclusive to Target. You can get online and check out the online supply, but if it is sold out then you can sign up for the notifications so that you can be notified the minute they are restocked online. Just like with Wal-Mart, you can head to different Target locations in your area because one might have a limited stock while another location is sold out, so it is better to check multiple stores instead of just the one closest to you.

Ebay– If you really want to get a Hatchimal toy for Christmas 2016 and are not having luck anywhere else, you could always use Ebay. Ebay does have Hatchimals in stock, as with most popular items, because people buy them for the sole purpose of reselling them for profit. Be warned though, if you buy from Ebay you probably are going to be paying a seller a lot more money than the Hatchimal is worth. Some Hatchimals are going for upwards of $4,000 which is insane, but you can find decent sellers here and there selling them for $100 or so. Even though that is still a mark up over the retail price, if you really want this toy for Christmas then you will pay more to get it.