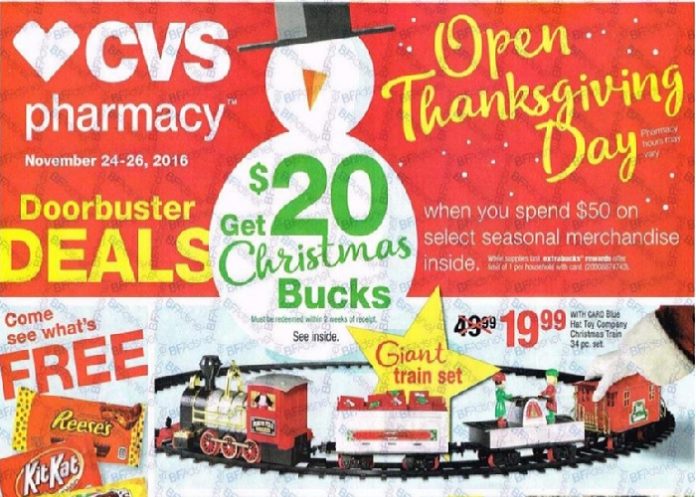 CVS Pharmacy is part of the retail and health care company CVS health and since the company was first founded in 1963 in Lowell, Massachusetts it has grown to be the largest pharmacy chain in the United States today. The chain has got so many stores that the real number can can only be guessed at. The estimated number of locations in 2016 was ‘9,600+’ officially, but that really means ‘9,600ish, approximately, as far as we know’, that’s how wide-spread this Nationwide chain is.

Now in 2018, CVS Pharmacy, the pharmacy retail arm of CVS Health – which is the 7th largest company in the World, is known as a trusted store with a huge assortment of products, and this Black Friday 2016, they’ll have a generous array of offers and doorbuster deals ready for customers as soon as the doors open.

CVS has something for everyone so these black friday deals are a great way to get some essentials at a cut-down price. You’ll pick up some sweet deals on their selection of beauty products, film and photo services, cosmetics, drugs, food, or whatever else you need in the 2016 Black Friday sale. You’ll need to be a card holder to qualify for most of the deals, but there are plenty of Extracare rewards too.

To make your life easier we’ve provided the CVS Pharmacy leaked Black Friday Ad containing all of the offers and doorbuster deals in the 2016 sale. So take a look below to check out all the best CVS deals and discounts for Black Friday 2016!

To see the full list of deals at CVS this Black Friday you can check out the entire ad scan for 2016 by clicking on the image towards the end of this article.

When you spend $50 on the range of selected seasonal merchandise, you’ll receive $20 Christmas bucks, which must be redeemed within two weeks of receipt, and within the selection there are some great stocking fillers that you could grab at an impressive discount.

All of the items listed above will add to the $50 total if you’re aiming for the $20 Christmas Bucks reward from the Seasonal selection deal, but here are CVS Pharmacy’s hottest Doorbuster deals for the Black Friday 2016 sale.

It’s Like getting it for free, after extrabucks rewards.

CVS Pharmacy Are Literally giving stuff away in the Black Friday 2016 sale. OK to be completely honest, they’re technically giving it away, but just like that bar of chocolate, these deals will reimburse you for the full cost of the item in the form of extrabucks, and they are all limited to one per household. These deals are limited in that respect, but they cover a wide range of useful, everyday items. There are painkillers, toothbrushes, soft drinks and make-up deals, and all of them are free via the CVS Extracare rewards program. To see the full range of free offers, see page seven of the full eight page leaked ad by clicking the image at the bottom of the page.

We don’t have CVS where I come from, and the diversity of it’s product range has made me hungry, thirsty, severely wanting a wireless indoor helicopter and pleading to Santa, so we’ll move on to make-up. CVS has a wide range of cosmetics, I’m not an expert in this particular field but there are a few great deals in there, even to my inexperienced eye, and ladies may wish to look at the wide variety of offers on pages 2-4 of the leaked ad.

There is a huge amount of diversity in the products and deals that CVS Pharmacy are offering during the Black Friday 2016 sale, and there are many great doorbuster deals.

When does CVS open for Black Friday?

The CVS Pharmacy Black Friday 2016 sale will take place from November 24th to the 26th, however with such a huge number of stores nationwide, opening hours will inevitably vary so check with your local CVS store for it’s opening times.

Will CVS Black Friday Deals be available online as well as in-store?

CVS will be opening their online sale at midnight on the 24th November, so you’ll be able to take advantage of the offers through the CVS wesite first. The online sale will close at the end of November 26th.

Because of the huge number of CVS Locations, there are differences in individual returns policies from store to store. Check with your local CVS Manager for further information.

If you would like to view the full twelve page Black Friday 2016 ad for CVS, then all you have to do is click the image below to see the complete leaked ad scan and check out all those great deals for yourself. 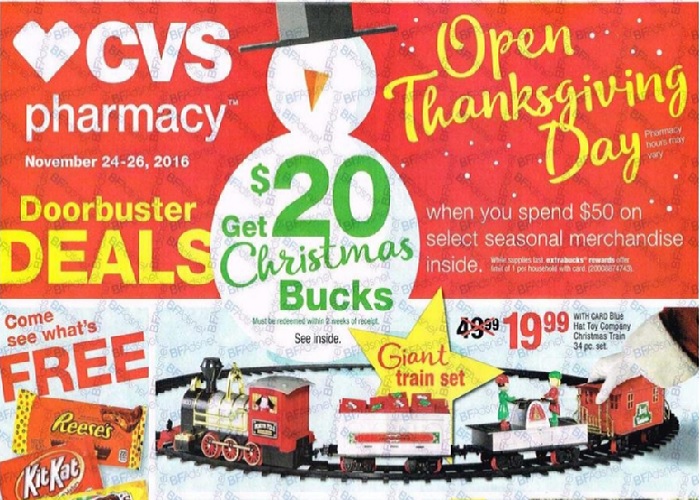