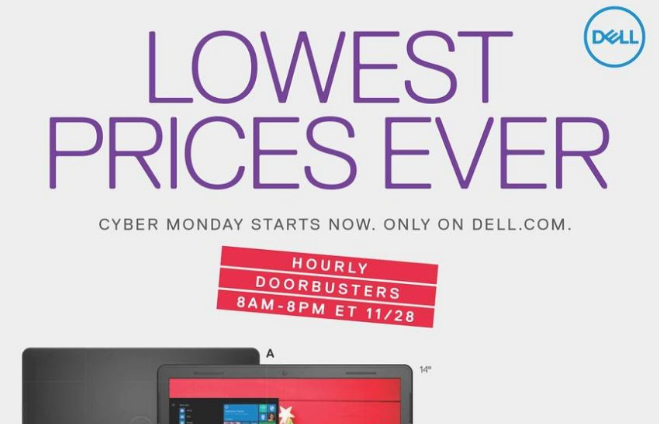 As thrifty shoppers around the world recover from Black Friday, the shopping holiday known as Cyber Monday grows ever closer. Cyber Monday is the perfect holiday for someone who doesn’t like crowds, standing out in the cold, and long lines. Many stores carry their Black Friday deals over into Cyber Monday, too, so you don’t always have to worry about missing out on that one special deal. Dell is a company whose Cyber Monday deals are roughly comparable with their Black Friday deals, which makes sense when you consider the fact that their major sales take place entirely online to begin with. Whether you’re looking for computers, televisions, or even a smartwatch, Dell has got you covered this year.

In this article, I’m going to be highlighting some of Dell’s most impressive Cyber Monday deals. I’ll try to cover a wide range of products across a wide range of prices, since I truly believe that this sale has something for just about everyone. However, I obviously won’t be able to get to every single one of their deals in a single article. If you like the look of some of the Cyber Monday deals below, then I highly suggest that you check out Dell’s website during their sale to see if there’s anything else of interest to you, too. Without further delay, let’s take a look at what Dell will be offering its Cyber Monday shoppers this year!

As you can see, there are quite a few impressive deals from Dell this year on Cyber Monday. Although the whole hourly doorbusters thing is kind of annoying, I think that it can be forgiven once you consider how phenomenal some of these savings are. After all, if it were easy to nab some of these deals, then it would be hard for Dell to discount them so generously to begin with. As I said before, this is by no means an all-inclusive list of Dell’s Cyber Monday deals. If you’re intrigued by any of the deals that I already mentioned, then I highly suggest that you check out Dell.com once their sale official rolls out. You never know what you might find!

When does Dell start Cyber Monday?

Dell’s Cyber Monday is going to be kicking off bright and early on Monday morning, at 8 AM EST.

This is a great sale from Dell, but unfortunately it’s kind of a short one. Their Cyber Monday sale is only stretching until 8 PM EST, which means that it’s going to last for around 12 hours. All the more reason to act fast!

Dell’s return policy, unfortunately, is not cut and dry. Their rule of thumb is that your product is eligible for return within 30 days of purchase. However, there are some notable exceptions to that rule. For example, you can’t return software under any circumstances. This is just one of about a handful of different exceptions to this policy that exist. I suggest that you check out Dell’s website to completely familiarize yourself with the intricacies of this policy. It’s better to devote some time to research now, if only to prevent yourself from being unpleasantly surprised further down the road.