The Good Promise Update – What Happened After Shark Tank 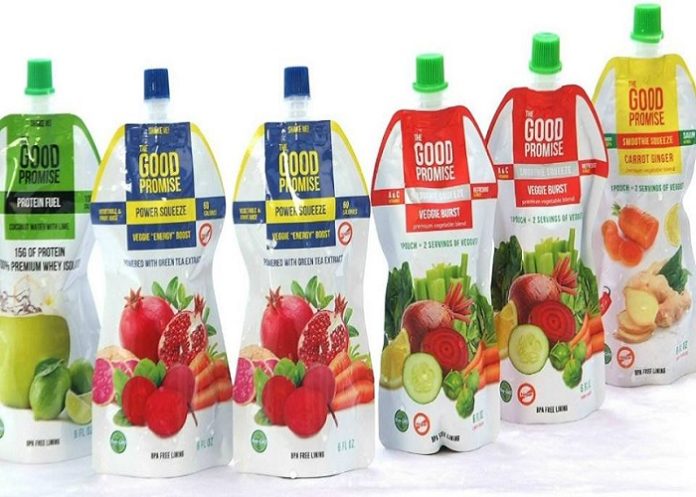 The Good Promise Before Shark Tank

Karen Posada and her mother Martha had already founded The Good Promise business in 2014, and they had even managed to get their range of healthy pasta sauces stocked in over 400 Walmart locations. They were driving around Texas that year to promote their brand in the Walmart stores that carried them and were spending many hours on the road, but they found that there were very few healthy choices when it came to surviving on convenience store food during their travels.

The pair were soon getting by on nuts and sunflower seeds, as they found that the healthy juices and smoothies available were either too expensive, or actually packed with sugar and not that healthy at all. The lack of a healthy alternative at a good price gave the pair the inspiration to develop their own brand of healthy smoothies, packed with fruit and vegetables, to fill the gap in the market. A comprehensive two year period of development and testing followed until The Good Promise smoothie line was finally perfected.

Karen had auditioned to be on Shark Tank back in 2014, when The Good Promise brand was first launched in Walmart, but she didn’t make the final cut. She had remained in contact with the shows producers afterwards and was invited to appear on the show when her smoothie line was ready to be launched. Karen eventually appeared in the tank in March 2016.

The Good Promise On Shark Tank

When Karen, from Austin, Texas, met the sharks she announced that she was seeking a $100,000 investment in exchange for 20% equity in the business, but she wanted to do things a little differently. Rather than launching into her pitch immediately Karen handed out samples first and asked the sharks to sample them as they would a full-bodied glass of red wine, telling them it would be just like a wine-tasting party, but without the hangover.

Kevin O’Leary is well-known as an avid wine collector, and amongst his many business concerns is Kevin O’Leary Fine Wines, so he responded to Karen’s request professionally, making sure that his fellow sharks were holding their glasses correctly, and rolling the smoothies around on his tongue with his eyes closed, deep in concentration.

There were a couple of encouraging comments as the sharks sampled a few smoothies, Robert Herjavec seemed to like the Carrot Ginger smoothie, and asked Karen if he could try the Veggie Burst variety from the pouch. As he was tasting it Kevin took the floor.

Mr Wonderful told Karen that his ‘advanced palate’ had detected that at least three of the samples had tasted like ‘industrial waste’. Karen looked shocked, and sincerely amazed that Kevin hadn’t appreciated the flavors as he continued, telling her that one of the samples tasted like soap.

Robert, who had now sampled the Veggie Burst smoothie seemed to agree, pulling the kind of face that left no doubt he was less than impressed with the taste too. Lori Greiner told Karen that she presumed that the smoothies were meant to be mixed, rather than tasted on their own.

Karen revealed that two of the samples were intended to be mixed, but for some of the sharks the damage had already been done, particularly in the case of Daymond John. The FUBU guru revealed that he had acid reflux, and he was burping like a ‘choo-choo train’. Karen attempted some damage control and appeared keen to move the discussion on, but Daymond wanted to discuss his digestive system a little more first.

‘Is this for a cleanse?’ he asked Karen, but without waiting for an answer he continued, ‘Because if this goes south…’ he said, pointing to his stomach. Lori collapsed into laughter. Robert Herjavec remarked ‘That’s way too much information’.

Karen, who was still smiling bravely, managed to confirm that the smoothie wasn’t intended to perform any sort of cleanse, but Daymond was on a roll, and he joked ‘Well it’s cleansing right now’ through gritted teeth. Karen smiled patiently as she waited for Lori to finish her fit of laughter, but she had to wait a while.

With more knowledge of Daymond John’s acid reflux than anyone needed to know, the shark tank got back to business. Robert Herjavec asked Karen what sales she had achieved so far. She told him that her original pasta sauce line had produced $260,000 in revenue in the first 18 months of sales.

That seemed reasonable enough, but Robert then asked what sales had been achieved so far with the smoothie pouches, and Karen admitted that the smoothie line was only just being launched, and so far had no sales.

With the realization that the smoothie line was ‘pre-sales’, the sharks looked a little less interested, Robert inquired why Karen had moved away from the pasta sauce line if it was reasonably successful. Karen revealed that although the sauces sold well, she had encountered problems keeping the price low enough to be competitive. When asked what her profit margin was on the line, she admitted it was just 23%. At that revelation Daymond John grimaced, although that may have been the acid reflux returning.

Lori Greiner told Karen that she had to be honest, she admitted she didn’t ‘love’ the smoothies, as she found them ‘hard to drink’. She suggested that Karen formulate the flavors a little more, which produced a quick burst of laughter from the other sharks. Karen defended the taste, asserting that extensive taste tests had involved over 2,000 people, but Lori wasn’t convinced, and she told Karen she ‘had to’ be out.

Karen was gracious, and composed, but Kevin O’Leary had more destructive opinions on the taste to share, wondering aloud if someone drank the whole smoothie they would have ‘The dance of the flaming sphincter’. Karen smiled determinedly through it, but Robert then joined Lori in dropping out, telling Karen he was sorry, but he just couldn’t ‘do it’.

Daymond John admitted to being a consumer of healthy products, but he believed that other healthy shoppers tended to stick to a brand they knew. New products needed large amounts of marketing to succeed in such a competitive market, and introducing a new brand into such a frenzy was a risky manoeuvre, as well as too much work for him, and with that Daymond was out too.

Kevin O’Leary had been characteristically direct about his opinions so far in the tank, and perhaps the kindest thing for him to do now would be to gracefully withdraw from the negotiations, and allow Karen to deal with Mark Cuban alone, but Kevin had a final barbed observation to make about The Good Promise smoothie line. He remarked that in order to eat a snail, all toxins would need to be purged from its intestinal tract before it was edible. Daymond John looked a little green when he heard that, and so did Karen, clearly anticipating Kevin’s ultimate point, which was that The Good Promise smoothies tasted like snails without the toxins removed. With that final stinging swipe at Karen’s business delivered, Kevin dropped too.

Karen seemed less optimistic, and more grimly determined as she made a last ditch effort to sell the idea of a deal to Mark Cuban, but Mark wasn’t going to be offering any sweet alternatives to the bitter pill of Kevin’s rebuke. He asked Karen to stop, and told her she was taking on a huge amount of battles, dealing with distribution, marketing and financing of orders, all on a product that had not even gone on sale yet. He believed that Karen’s message and strategy was not ‘crystal clear’, and customers wouldn’t choose her product because of that. Karen emphasized the healthy contents of her smoothies but Mark interrupted her with the response ‘there’s a thousand of those out there’. Mark told Karen she was ‘taking on the World’, and he was dropping out too, leaving Karen and The Good Promise business without a deal in the tank.

The Good Promise Now in 2018 – The After Shark Tank Update

Not every entrepreneur leaves the Shark Tank with a sweet deal, but for Karen Posada the experience proved to be an overwhelmingly negative experience, that left her with an extremely bitter after-taste.

The Good Promise pasta sauce brand that was launched in 2014 had met with almost immediate success. Within months of perfecting the product Karen and Martha had got overwhelmingly positive feedback from Walmart tasters, and the sauces were stocked in 400 Walmart stores in one fell swoop, way before the business was ready to meet such a demand. The expense of packaging the sauces in glass jars had substantially cut down on the profits to be made from the line, and Karen revealed that the sales were barely able to keep the company in profit, even though her workload at the time was chaotic and stressful.

The new range of healthy smoothies was an attempt for The Good Promise to break into a far more lucrative market, with a far higher profit margin per unit, but the negative reaction from the sharks to the taste of them led to few advantages for the business.

In an interview in June 2016, three months after her segment had first aired, Karen revealed that her product had undergone extensive taste tests before she had ever entered the tank, and the reactions of the sharks to her line of smoothies had caught her completely by surprise, so sure was she that they would like the taste, even if they didn’t like the business. She revealed that although she had received about 3,000 orders via the company website immediately after the show, the negative reaction from many viewers had been an uphill battle to deal with. And the negative comments far outweighed the positive feedback.

Karen enthused in June that many of the customers that did actually order the smoothies had come back to buy them again, full of praise for the product, and she was looking forward to concentrating on online business in the future now that the attention from Shark Tank had kick-started the website sales. Unfortunately however, things seem not to have gone to plan as The Good Promise website appears to be closed now in November 2016. The Good Promise social media sites have likewise been silent since shortly after the Shark Tank appearance, and it appears that The Good Promise business has ceased trading online, at least temporarily.

And of course, Shark Tank is not just about business, it’s also entertainment, and the Tank isn’t always exactly like we imagine it to be. Karen revealed that her segment was filmed early in the morning, which perhaps explains at least partially why the Sharks reacted so badly to the smoothies, particularly in the case of Daymond John. As a final note Karen offers other entrepreneurs a cautionary tale about resisting the temptation to expand too quickly, and cause nothing but a hectic workload, for profits which hardly seem worth it. Even if a retail giant like Walmart loves your product and wants to stock it in hundreds of stores, sometimes it’s best just to take progress a sip at a time, and see what success tastes like.