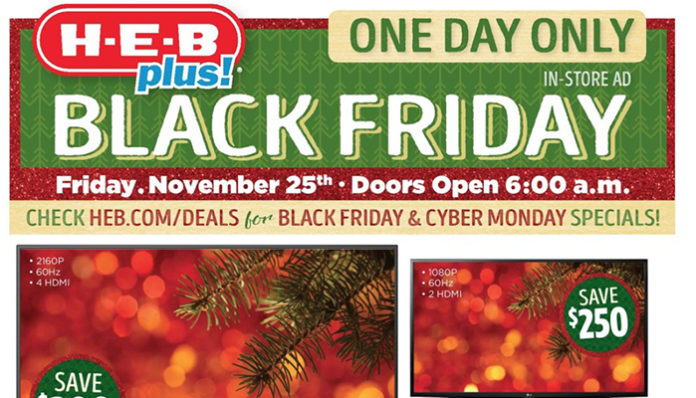 H-E-B Plus! was originally launched in the early 2000’s as a subsidiary to H-E-Bーan American supermarket chain that was first founded by Florence Butt in the early 20th century. One of the largest private companies in the United States, H-E-B has close to 400 stores across the country and grosses an estimated amount of $21 billion a year; in terms of revenue, they ranked in as being the twentieth largest retailer in the US as of 2014. Unlike the parent company, which mainly sells food and grocery items, H-E-B Plus! focuses majorly on selling non-food products such as electronics, housewares, apparel, toys and other general merchandise. The first three H-E-B Plus! stores opened in Waco, Corpus Christi and Austin in 2004. Proving to be successful, several other locations were added in the subsequent years in cities such as Beaumont, San Antonio, Pearland, Belton, amongst others.

A one-stop shop for a wide range of items, H-E-B Plus! will be participating in this year’s upcoming Black Friday event. Whether you’re looking to purchase Christmas gifts for others early or presents for yourself, they’ve got you covered with their amazing Thanksgiving dealsーfrom Smart TVs to waffle makers, H-E-B Plus! has got it all. Although Thanksgiving weekend is still a couple of weeks away, their 2016 Black Friday ads have already made its way onto the internet. Judging from the eight page flyer, the company will be marking down the prices for dozens of itemsーyou definitely wouldn’t want to miss out on this opportunity to buy some quality items for cheap. Although they will be closed on Thanksgiving day, they will be open for business bright and early at 6AM on Friday, November 25th, 2016ーit’s also when their amazing Black Friday one-day-only sales will go live. As with all amazing offers, quantity of items can be limitedーso it’s best that you get there early!

On top of slashing the prices for many of their products, H-E-B Plus! will also be offering its customers a free $10 coupon (for your next shopping trip) for any purchase made above $50 on Friday, November 25th from 6AM to 11AM. Not only will they be selling things such as video games and tablets for extremely cheap prices in-store the day after Thanksgiving, but H-E-B Plus! will also be launching special Cyber Monday deals on November 28th, 2018 onlineーfor more information on these exclusive offers, please visit Heb.com/deals for more details. Because we know how vexing it can be to go through pages and pages of ad scans for good sales, we’ve gone ahead and done it for you. On this page, we have compiled a list of some of the best items that H-E-B Plus! has for sale this Thanksgiving season. Of course, if you’d like to look through their flyer yourself, you can do so at the end of this article.

Powered by the Triple XD Engine, this 43 inch LG Smart TV delivers strict contrast and clarity for the best picture performance. Equipped with a Wi-Fi chip, it easily connects to the internet for easier access to popular streaming apps such as Netflix. With its Virtual Surround Plus system, the LED TV is also capable of offering a richer, overall sound experience.

Now you can enter the world of Minecraft with this Xbox One S Console Bundle. Capable of playing 4K movies and Netflix video titles in beautiful Ultra HD, the Xbox One S, which was released in August 2016, is the latest redesigned version of the original model. Comes with a full game download for Minecraft, an Xbox Wireless controller and a 14 day Xbox Live Gold trial.

Keep your home tidy and clean with the help of this Shark Rocket Upright Vacuum. Powered by a 4.2 amp motor, it’s capable of cleaning a wide range of surfaces from carpet to hardwood floor. Compact and portable, its hand vac mode also allows you to effectively clean areas such as furniture and stairs. Its two separate speed settings also offer its users more vacuuming control.

Bring the party with you wherever you go with this compact QFX Speaker. Featuring a 15 inch woofer and tweeter, it flawlessly streams from devices such as Smartphones via its Bluetooth receiver. Equipped with a rechargeable battery, it also boasts a digital FM tuner as well as USB and SD card playback capabilities. Comes complete with handles and wheels for easy transport.

Affordable yet versatile, the Trio-Stealth GI 7 Tablet comes with built-in Wi-Fi, which makes it ideal for tasks such as web browsing and reading. Fitted with a front-facing camera, it also boasts 8GB of internal flash memory and 512MB of RAM. An Android device, it also comes with a number of popular pre-installed apps.

Immerse yourself completely in the gaming world with the Xbox One Stereo Headset. Featuring a detachable headset adaptor, complete audio controls are conveniently available at your fingertips. Easy to set up, its design allows for it to be easily wired to the Xbox One Wireless Controller. Comes with a unidirectional microphone for clear voice communication.

Embark on a gaming adventure with this limited edition PS4 Uncharted console bundle. Featuring a next-generation processor, it offers visually stunning graphics and an immersive gameplay experience. With its diverse online multiplayer capabilities, you can even play and team up with your friends around the world. Comes with a Dualshock 4 Wireless Controller.

Start your day with a cup of freshly brewed coffee with the Ninja Coffee Bar Brewer. With its patent-pending brewing technology, it’s designed to prepare caffeinated beverages of variable richness without any lingering bitterness. It even comes complete with a Ninja Easy Frotherーperfect for spicing up drinks such as mochas and cappuccinos.

Capture life’s heart-pounding adventures with the SoundLogic Action Pro Sports Camera. Fully waterproof, the high definition device mounts easily to items such as handlebars and helmet for easy recording. Comes complete with a 2 inch LCP display, a 120 degree wide-angle lens, a built-in speaker and mic and a self-timer.

Stay charged and never run out of power again with the iTek Portable Power Bank. Equipped with a built-in flashlight, it comes with 3 separate USB slots for rapid chargingーit even comes with its own USB charging cable. Uses a travel-friendly DC 5V 1A input that is supported worldwide.

Brushed with a woodgrain finish, the QFX Portable Mini Tower Speaker is perfect for those who are looking to take music with them on the go. USB rechargeable with a 90mm speaker, it uses Bluetooth technology to sync wirelessly to devicesーcompatible with most PCs and MP3/MP4 players.

Compact and lightweight, the Sentry Portable Bluetooth Pill Speaker offers Hi-Definition stereo sound and also features a hands-free mic. Switch between songs easily without ever having to touch your device with its convenient control buttons. Rechargeable, it comes with a 3.5mm Aux Input as well as the cable.

Entertain yourself with some classic games from your childhood with the Sega Genesis Ultimate Portable Game Player. Boasting a 2.8 inch LCD display, it comes with 80 pre-loaded titlesー including Super Street Fighter II and Sonic the Hedgehog. Comes with a rechargeable built-in battery that can be charged with an included USB cable.

Play a few nostalgic titles by yourself or with friends on the Atari Flashback 7 Classic Game Console. With 101 built-in games (e.g. Frogger, Centipede, Asteroids, Missile Command, Super Breakout, Warloads), it’s ready to be used as soon as it comes out of the boxーyou can plug it in and play on any TV. Comes with two Wireless Atari Controllers .

Fitted with an eye-catching RGB LED light, the QFX 12 inch Portable Speakers comes with a 12″ woofer and built-in wireless audio streaming. Easily connect portable playback devices with its 1/4″ microphone input, 1/8″ aux stereo input and 1/4″ guitar input. Also comes with a wireless remote for easy control of volume and other settings.

Drink making has never been simpler with he Nutri Ninja Digital Blender. With its modern Auto-iQ Technology, it uses timed pulsing and pausing patterns to do all the blending for youーit even comes with a digital countdown timer! With 1000 watts of power, it effortless crushes whole fruits and vegetables for the perfect vitamin extraction.

Easily produce great-tasting coffee in the kitchen with the Mr. Coffee 12 Cup Programmable Coffee Maker. Along with its dishwasher-safe glass carafe, it also features a programmable timer that can be used to prepare your caffeinated drink even before you’re out of bed. To save energy, it also comes with an automatic two-hour shut off.

Make delicious smoothies and drinks in seconds with the Ninja Professional Blender. Featuring a modern and sleek design, it puts forth 1000W of professional crushing, processing and blending power. Entirely BFA-Free, all parts are also dishwasher safe for easy cleaning.

So there you have itーthose are a few standout offers from H-E-B Plus!’s 2016 Black Friday ads. Remember, the deals only last while supplies last; if something from the above list caught your eye, it’s probably best to go to the store early on the upcoming Thanksgiving weekend. In addition to the products which we’ve mentioned, H-E-B Plus! will also be discounting dozens of other items so be sure to check out their full ad scans for yourself to see if there’s anything that you’d like to snag. Some of the other things which they’ll be putting on sale include: clothing, DVDs, video games, comforters, pillows, children’s toys and more.

When does H-E-B Plus! open for Black Friday?

While they will be closed on Thanksgiving day, they will be launching their Black Friday deals bright and early at 6AM on Friday, November 25th, 2016 and will remain open until midnight. Store hours may vary between locations however, it is advised that shoppers check their local H-E-B Plus! hours on their official website.

H-E-B Plus! will be marking down prices on Black Friday both in-store and online. While the offers advertised in their ad are only valid in-store on Friday, November 25th, 2016, they will be launching other exclusive deals online for Black Friday and Cyber Monday. For more information, please visit their official website at Heb.com/deals.

Most items purchased from H-E-B Plus! are eligible for a full refund or exchange within 90 days of the original purchase with the receipt. However some exceptions may apply; for more details, please view their Refund policy on their official website.

If you’d like to see H-E-B Plus!’s full 2016 Black Friday ad scans, you can do so by clicking on the image preview below: 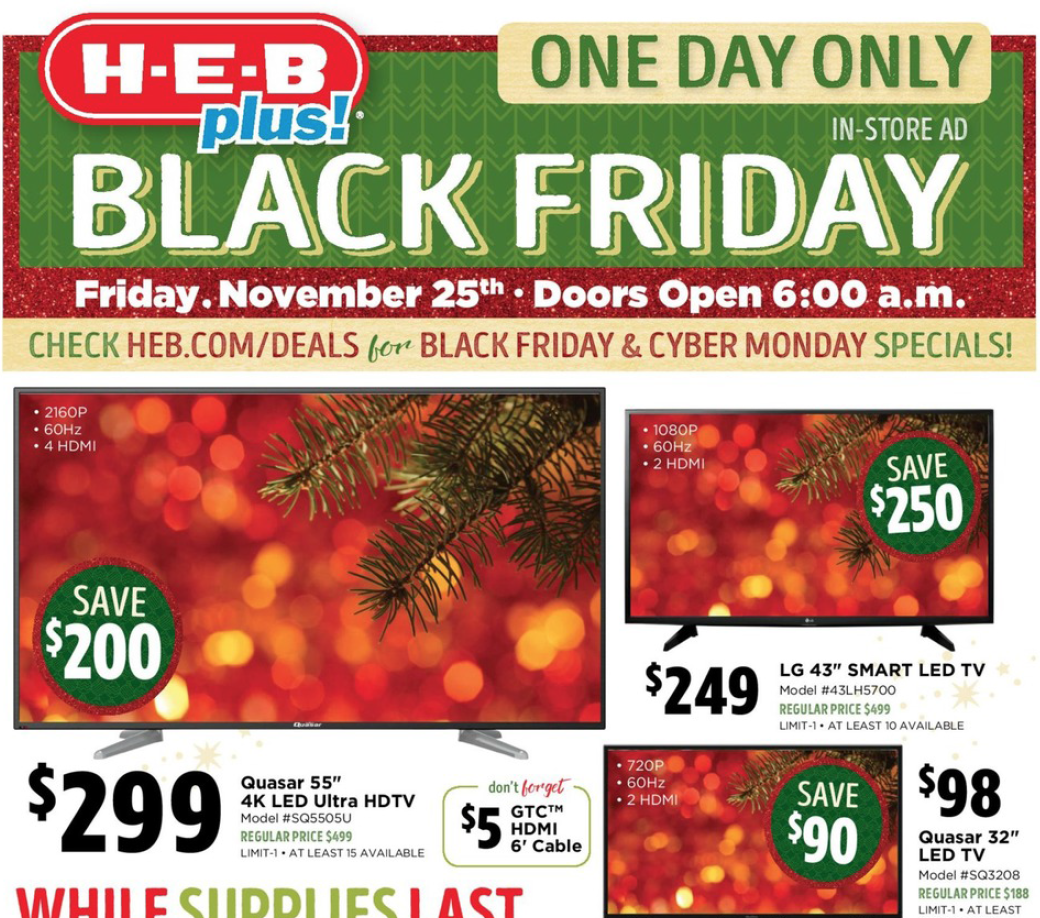