The story of P.C. Richard & Son goes all the way back to the original P.C. Richard, who opened his first store in 1909 and his son, A.J., who grew the company into the household name it is today. Now the largest chain of privately, family-owned appliance, television, electronics, and mattress stores in the country, P.C. Richard & Son upholds the highest standards of customer satisfaction and product quality. The family feeling goes a long way and this Black Friday, pull up a chair and pass the mashed potatoes, because you’re family now.

Due to company policy, P.C. Richard and Son will be closed on Thanksgiving to allow their employees to spend the holiday with their own families. The festivities will start bright and early on Black Friday, however, when doors open wide at 7 AM and the deals this year are so hot, you’ll need oven mitts. Speaking of ovens, kitchen appliances are just the starter course to the feast of amazing steals you’ll find. TV’s, computers, mattresses, personal electronic devices, webcams, and gaming consoles, they’re all up for grabs at absolutely unbelievable prices.

Since you don’t want to blow the entire Christmas budget on Black Friday, P.C. Richard & Son has you covered this holiday season with financing offers on many major brands including Sony, Samsung, LG, Philips, Frigidaire, Whirlpool, KitchenAid, Maytag, Sealy, and more! Whether you’re shopping for your whole family, a cherished few, or you’d rather pick up a few things for yourself, make sure you get to P.C. Richard & Son early because while Black Friday deals are good all day, they’re only while supplies last.

The P.C. Richards Black Friday 2016 ad just leaked online and we’ve narrowed down the choicest morsels of savings, just for you. These deals are hot so don’t put away that Christmas list just yet!

Gifts for the Gamer:

This is just a sample of the frankly mind-blowing deals available this Black Friday at P.C. Richard & Son. All these great steals are only good while supplies last so you’ll want to be first in line. So in conclusion, the early bird gets the worm so get out there and be the earliest bird! You can find the full P.C. Richard & Son Black Friday 2016 ad for download at the bottom of this article.

When does P.C. Richard & Son open for Black Friday?

All locations will be closed Thanksgiving and doors open at 7 AM on Black Friday.

P.C. Richard & Son stores will open at 7 AM and remain open until 11 PM, giving you a full 16 hours to take advantage of these smoking hot deals.

Not all Black Friday deals are available online and prices are good for 11/25 only; if you want to make sure you get that special item this year, it’s best to be there in person.

Because P.C. Richard & Son strives to deliver the best service for their customers and accept returns with receipt within 30 days of purchase. For large items, a customer service representative will work with you to schedule a convenient day to pick up your return. 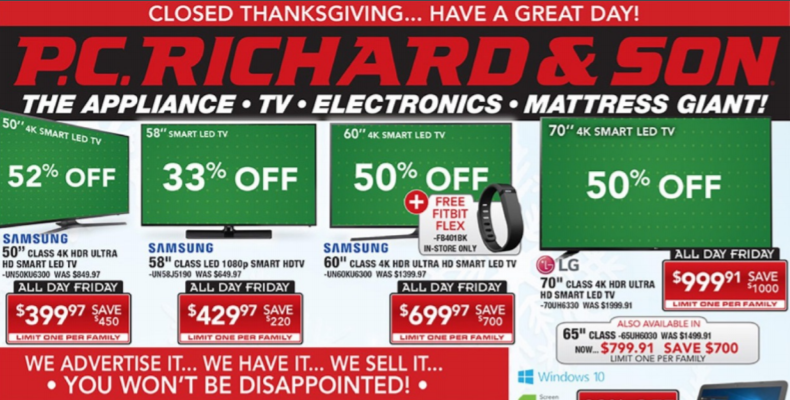 Anna Barlow
Anna is a freelancer writer with a passion for reading, travel, and psychology.
RELATED ARTICLES
Business